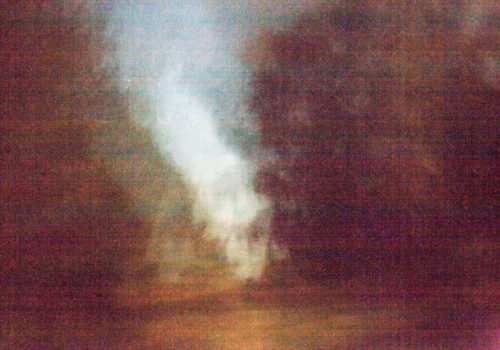 Through three years of his work, Alex F. Webb has increasingly focused on the land of the east coast of England, particularly Suffolk, an area known for its rural charm but with a rich history of military experimentation.

Taking sites of uncertain access as a starting point, Webb has explored the ways in which individuals challenge and consider orthodox explanations of extra-ordinary occurrences. In particular, Blind Landing Experimental Unit [BLEU], the subject of Webb’s book and installation at Webber Represents, focuses on The Rendlesham Forest Incident of December 1980. An area of woodland next to the former Royal Air Force Base at Woodbridge, Suffolk, in which there were a number of reported sightings of craft of unknown origin (Unidentified Flying Objects). The incident has since become the focus of various allegations concerning coverups by the Police and the MoD, whilst being widely dismissed as a hoax.

Presented as both a book and as an installation, BLEU acts as a dossier to the process of investigating The Rendlesham Incident. Process is emphasised over conclusion, suggesting that what is important is the way in which we perceive the worldly as otherworldly, in turn arguing that individual interpretation is just as, if not more, valuable than official explanation. BLEU is insistently anti-narrative, encouraging us through the feel of the photographs to understand perception as subjective but of incredible worth. Webb encourages us to understand accumulation as an end in and of itself, interpretation is postponed continuously so that the images remain persistently uncanny, challenging our desire to form a clean-cut story surrounding the incident itself. The images resist a documentary approach, instead blending formal content and subject matter to question how it is that we perceive the flat image in a three dimensional world.

Alex F. Webb lives and works between Suffolk and London. He studied Photography at the University of Brighton, graduating in 2014. Recent group exhibitions include fotopub festival, Slovenia, 2015; Format photography festival, Derby, 2015. Published books include; 2015 Blind Landing Experimental Unit [BLEU]; 2012 Mr. Cad; 2011 American Surfaces; 2010 I am Julian Assange. As a founder of Fourteen Nineteen (2009-2014), Webb has published books with Daniel Shea, and Sean Vegezzi among numerous other up and coming young artists.