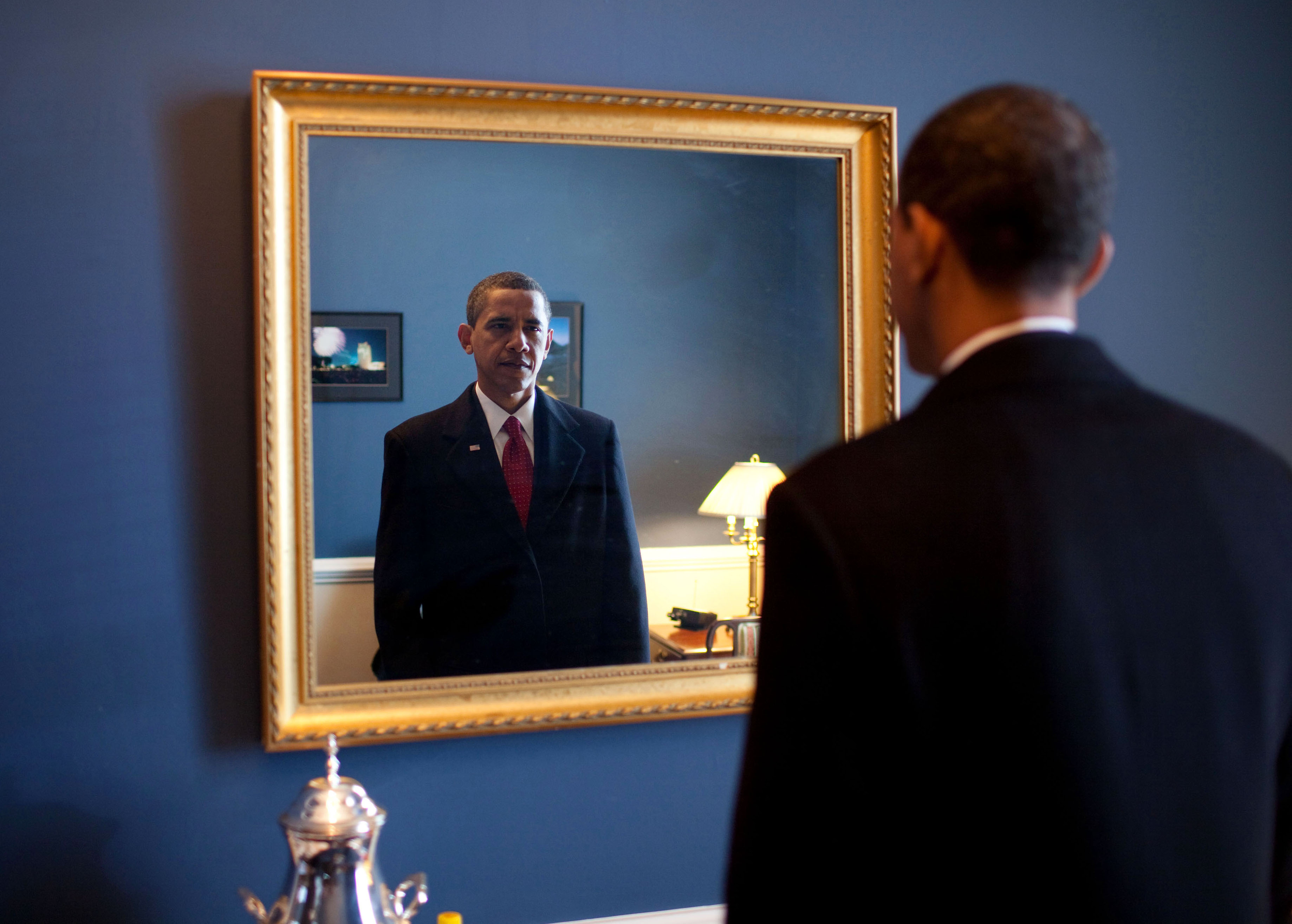 A photographer of the White House during Presidents Reagan (1983-1989) and Obama’s terms (2008-2016), photojournalist Pete Souza released these days his film documentary The Way I See It. Spending almost days an nights along these presidents, Pete Souza’s remarkable photographs have unveiled what’s behind scenes in the White House, telling the pressure of national and international decisions as well as the orchestration of power in Washington.

The Way I See It provides a chronicle of two different Democrat administrations, and more widely, affirms an accurate eye on the U.S. presidency role, its everyday life, its intimacy and its guidelines. It provides a vibrant affirmation against the misuses of this function, in the light of Trump highly conflictual understanding and practice of power.

Arthur Dayras: In The Way I See It, you sum up what was your function at the White House. “My goal was to create the best photographic archive that was ever been done ‘. Was this a success?

Pete Souza: I think I did as well as I could. I’ll let other people judge whether I’ve reached that goal or not. But I thought I’ve done the best job that I could.

You’ve first entered in the White House during the Reagan presidency. At that time, did you have any inspirations, a photographer that led you?

The guy that sets the bar very high was Yoshi R. Okamoto, with his level of access and his coverage of Lyndon B. Johnson. He was the chief presidential photographer under Jonson. At that time, I was just trying to get close to the kind of job he did.

Okamoto had access to everything Johnson did, and I was trying to have the same level with President Obama. His pictures were incredible. They are true documentary and authentic pictures, not staged images. In all aspects, he was doing his shots in an artistic way. It was a different time. In the sixties. Okamoto was shooting on black and white films, while I was shooting all-digital, all color. The medium is different.

In your film you also affirmed looking as yourself “as an historian … with a camera”. Did historians begin to study your pictures? If yes, in what way?

Cara Finnegan, communication professor at the University of Illinois, is actually publishing a book on White House’s photography, not just on me but with other presidents and other photographers. She’s looking at my works as a historical document. Michael Shaw, who runs the non-profit organization Reading the Pictures, also regularly analyses many of individual pictures. It’s also interesting to see that my Reagan pictures feel now more historical than the Obama pictures, because not enough time has passed since I’ve left the administration. It’s interesting for me to look back at the Reagan pictures and observe some new aspects, just because thirty years have gone by. I look at pictures differently.

To explain a bit, at the end of each administration, all the photographs, every single one of them, are turned over our national archives. Not just the pictures but also all paperworks, documents, presidential emails, notes… They are all made public. Right now, all the pictures I’ve made under the Reagan administration are online at the National Library. And it will be the same for pictures I’ve made under Obama. But I don’t know why anybody would like to go through two millions of pictures…

So what I meant by being “a historian … with a camera” … I’m the one person who’s the non-participant in all those meetings and activities. I’m the observer with a camera. I’m making these pictures for the historical archives. For history, it’s important to understand, for historic meetings, what were the mood and emotions, who is in the room, what is the context. Fifty years from now, there will be people that get a sense of what Obama’s presidency was like, and what he was like as a human being, by looking at my images.

To follow a president on a daily basis means being paying attention to the body, to the face, to his physical emotions, a sum of different portraits. There are other ways to show the political body, and the influence on citizens. I am thinking of Paul Fusco’s Robert Kennedy funeral train, where the generative environment, the symbolic presence of a body reveals a wide range of emotions? Rather than a simple portrait, were you trying to illustrate politics in a different way?

Well, I paid attention to how people interacted with President Obama, whether directly or not. I often turned my camera away to President Obama. That was an ongoing part of my coverage. I think these pictures will be important in the coming years. For that era, you’ll get a good sense of how people were, just by looking to their faces.

There is one picture symbolizing what was the Obama presidency, and how he ruled and organized his authority at the White House. The picture was taken in the president office, the president and three councilors are in a deep discussion but instead of looking at faces, we see four feet.

I backed off and took a wider shot. Zooming on the feet, you could clearly tell the three heads Obama was talking to were women. It was a symbolic way to make that point: many of heads working at the highest level were women, were people of color. You look a picture of Trump meeting and you’ll only see white guys.

Almost right away after beginning to follow Obama as a U.S. Senator in 2005, you said almost right away he was, a “good subject”. Was there any time where he was a bad subject?

When I said that, “a good subject”, he was the kind of person that was comfortable having me taking pictures that the presence of my camera didn’t change the way he behave. As a photojournalist, you want to make authentic pictures. But if you have a subject overly aware of the camera, it sometimes becomes difficult to have a natural picture. The subject became really worried about its gesture. From the beginning, when he was a U.S. Senator, Obama didn’t mind.

The documentary goes back on the Ben Laden moment, when President Obama and top brass U.S. Army followed, from a strategic room, the execution of the Al-Quaida boss on May 2, 2011. Some of these photographs were blurred, because of secret defense. Were they often checked, on a regular basis?

Whenever they were sensitivity to pictures, if they were paperwork, classified documents, top-secret documents, that could be problematic. Sometimes there would be a meeting in the “Situation Room”, and by circumstances, you could spot on the paperwork what the words say. That was the only circumstances. It was either not making the picture public or blurring the document and tell people about it. We often chose to make the picture public and blur the document. Then, you’re transparent about it in the caption.

What I’ve learned with your movie is how a president faces death, not only death related to crimes, like the Sandy Hook Elementary School Shooting in Newtown, Connecticut, but also the hazardous deaths (like a natural disaster), the military deaths, and the everyday deaths. And you can understand how a president reacts and handles these simple, but yet disturbing events. How politics is somehow overwhelmed by all kind of tragedies. You’ve lived these events through your lens, and you’ve seen President Obama facing these hardships.

I can remember the first situation that he faced in that kind of circumstances. It was a mass shooting in Forthood, Texas [on November 5, 2009]. It was its first time and I believe there is no manual, with a step-by-step process, telling a president, “here is how you interact with people that I’ve faced a strategy”. It’s empathy and it’s compassion, and either you have it or you don’t. I remember this “first time” because he didn’t know what people expected from him, these families who have just lost somebody, who had been killed by some crazy guy with a gun … and it turns out what they wanted was a hug and a chance to tell about their son, their daughter, their husband.

I have to say … he had to do that too many times. He faced multiple mass shootings during his presidency, natural disasters. And one of the most difficult times was indeed at the Sandy Hook Elementary School, where 26 people were shot and killed, including 20 first grade kids, about six or seven-year-old kids. Can you imagine what it for a parent to learn that your little six-year kid died? The one you had just put in a school bus few hours before. You have to go to identify the body, after he had been shot to death at close range. When that happened, he was so overcome by emotions. He had young kids. He was looking at it as a parent, trying to be in the shoes of these parents. Having lost a young child, just when they were starting their lives… When we were in Newtown, two days after the shootings, it was one of the most difficult things he had to do in his presidency. The way he handled that, consoling these people, being compassionate and empathetic…

If you compare that with what’s happening today with President Trump. We had a mass shooting in Santa Fe, Texas [May 18, 2O18]. [After visiting the parents] Trump went and told everybody people treated him like a rock star! I think of myself, “It’s not the point. It’s not the purpose of you going to visit these families. You’re here on behalf of these families. You’re there to console these families, not having your picture taken with them, so you could tell the public how you were treated “. For this guy, everything is through the prism of him! And that’s not the job of the president. The job is you’re representing all of us, not just yourself. We want our President to be competent, honest, compassionate and empathetic. He’s not a leader. He’s weak and ineffective.