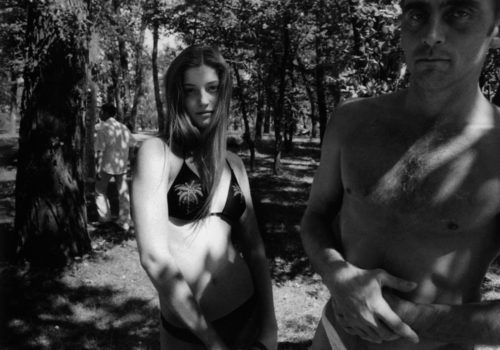 Yelena Yemchuk was born in Kiev, and immigrated to the United States with her parents, an athlete and a teacher when she was eleven. She studied at Parsons School of Design in New York and Art Center in Pasadena. She started her photography career shooting music album covers as well as directing music videos. Her focus on fashion came later when a friend suggested they do a fashion shoot for the magazine Dazed and Confused. Her fashion work embodies a cinematic style, that tells a story around her subjects. She has contributed extensively to: Italian Vogue, Japanese Vogue, Another, The New Yorker and the New York Times.

Photographer and painter, Yelena Yemchuk is most commonly known for her fashion and portrait photographs. Yet her personal work, usually shot on a 35mm camera while traveling around the globe, has rarely been seen. On one such trip to her hometown of Kiev, Ukraine, Yemchuk visited Gidropark, an island on the Dnieper River that she frequented as a girl. On the beaches, sports grounds and woodlands that populate the park, she found herself face to face with the characters and faces that she continually searches for. Taken over three summers between 2005 and 2008, Yemchuk captures life in Gidropark as only she can portray it. Families stripped down to their bathing suits (or even less) enjoying a picnic take on a Felliniesque quality through her lens. With each successive image, the viewer is drawn into a world that seems too fantastic to be real. Yet this is one of Yemchuk’s greatest strength – to capture that one extraordinary moment that tells a story beyond what is actually happening before her. Each image is an exquisite film still, giving the viewer not only the image on the page, but richly creating an entire storyline of its possible before and after.

Gidropark is her first book. From May 6 – July 16, Gitterman Gallery in New York is exhibiting photographs from the book in conjunction with the North American release.