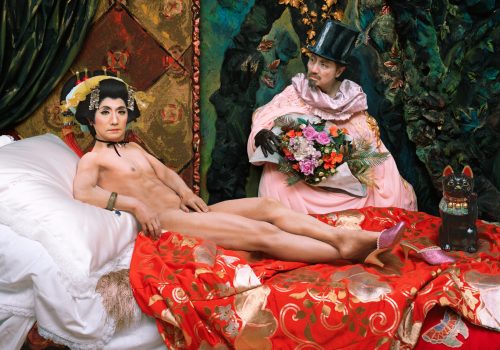 Japan Society Gallery announces Yasumasa Morimura: Ego Obscura, the first solo institutional exhibition by the Osaka-based artist in New York City. On view from October 12, 2018 through January 13, 2019, the exhibition showcases Morimura’s ambitious thirty-year practice spent deconstructing the concept of “the self” through his elaborately restaged self-portraits as historical and cultural icons. His exploration challenges traditional depictions of Eastern and Western roles relating to gender and sexuality, and critiques the power dynamics of Western culture and postwar Japanese history.

Ego Obscura, curated by Japan Society Gallery Director Yukie Kamiya, takes as its point of departure the artist’s acclaimed photographic portraits. Morimura transforms himself into famous protagonists from masterpieces of European painting, pop culture icons, and notable historical figures from the twentieth century, including Manet’s Olympia, Marilyn Monroe, Yukio Mishima, and General Douglas MacArthur, the Allied commander during postwar occupation of Japan. The exhibition also premieres two of Morimura’s newest works in the U.S., including his first feature-length video piece, Ego Symposion, in which he embodies twelve master artists known for their self-portraits, and Nippon Cha-cha-cha, a theatrical installation developed from his cinematic performance featuring Morimura as key figures of twentieth-century history and pop culture. Nippon Chacha-cha will be performed during the exhibition’s opening week.

“Since he participated in international art exhibitions in the 1980s, Morimura has been a leading figure in bringing contemporary Japanese art to a global platform. Not only does his work offer a deeper understanding of Japanese identity within a Western context, it also inspires important dialogues between cultures in an age where self-reflection and identity are constantly examined,” said Kamiya.

In his preface to Ego Symposion, Morimura addresses viewers directly with a statement about the complexities of artistic identity and truth that backgrounds his oeuvre: “In the end, what is history? And what is historical truth? These are questions that do not have ready answers. Various truths are concealed in many paintings. On the other hand, a painting can be seen as a fake, something caked with falsehoods and misunderstandings. A painter’s testimony is at once a confession of a hidden truth and an attempt to overwrite their life with a false statement.”

Morimura’s conceptual portraits present a range of interpretations of the self, including expressive takes on self-portraits by van Gogh, Frida Kahlo, and Andy Warhol, as well as transformations into Old Masters such as Leonardo da Vinci, Rembrandt van Rijn, Albrecht Dürer, Caravaggio, and Charles Le Brun. Simultaneously critiquing and paying homage to art history by conflating his own body with icons of Western culture, Morimura’s work examines the concept of “I” and the cultural construction of individual identity. As an Asian male artist who takes on the role of renowned personages in art history and pop culture, including women such as Frida Kahlo and Vermeer’s Girl With a Pearl Earring, Morimura’s masterful shapeshifting challenges traditional conceptions of gender, culture, and sexuality by subverting the power dynamics of the gaze and returning the subject’s gaze within his portraits.

On a more global scale, Morimura’s appropriation of Western images and historical figures questions how Japanese art and artists are defined through their relationship to postwar history within an increasingly diffused and international cultural landscape.

Yasumasa Morimura (b. 1951, Osaka, Japan) is internationally active artist whose practice spans more than three decades, having made his international debut at Venice Biennale, Aperto, in 1988. He is best known as one of the most important figures producing “staged photography.” Creating the sets, costumes, and make-up for his works, he transforms himself into subjects from Western art and pop culture as an examination of the cultural canon. Through his idiosyncratic reinterpretations of historic figures, he questions gender and racial constructs, challenges historically entrenched power dynamics of the gaze, and offers a commentary on the obscurity of identity. He has had solo exhibitions at the Pushkin Museum, Moscow (2017), National Museum of Art, Osaka (2016), and the Andy Warhol Museum, Pittsburgh (2014). Morimura was the Artistic Director of the Yokohama Triennale in 2014.

Since 1971, Japan Society Gallery continues to be the premier institution in the United States for the display and interpretation of Japanese art and culture. Through groundbreaking exhibitions and related programs, the Gallery cultivates a broader understanding and appreciation of Japan’s contributions to global artistic heritage; explores the artistic interconnections Japan shares with its Asian neighbors, the U.S., Latin America, and Europe; and celebrates the diversity of Japanese visual expression from prehistoric times to the present day.