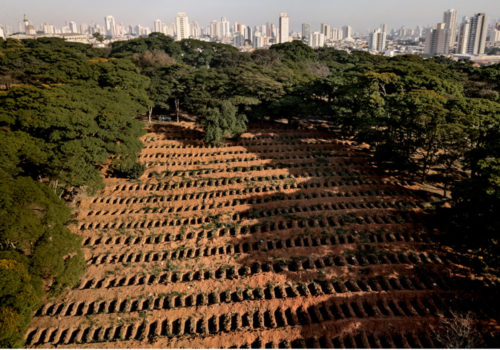 A total of 74,470 photos had been submitted to the 2021-edition of World Press Photo, the world’s most prestigious photo competition. The final winner was the Danish photographer Mads Nissen. The triumph was the second in his career. The winning photo was taken in a covid-ravaged Brazil and mixes a long line of emotions. The Eye of Photography has talked to Mads Nissen about insisting on getting the good photo, about the photographer’s own ethics and about the importance of getting really close.

“I am usually sent on a photographic mission after I have made a pitch to my editor at Politiken (a Danish daily, ed.). I don’t just tell my editor: ‘Please give me 7,000 euro, so that I can go to Brazil’. My mission and travel proposal is very detailed, reasoned and thorough, and even before I leave, I have made a number of agreements. From the moment I land at the airport, I know exactly what I’ll be doing”. – Mads Nissen

Mads, what can you tell me about your wining photo?

The photo was taken in the summer of 2020 at a nursing home in a covid-ravaged Brazil. It shows the 85-year-old Rosa Luzia Lunardi who is embraced by the nurse Adriana Silva da Costa Souza through a transparent plastic curtain.

Why did you decide to go to Brazil?

Well, at the time things were starting to get complicated in Brazil, mainly due to the poor handling of the pandemic.

How was it possible to take this photo?

Before leaving for Brazil, I had made agreements with two nursing homes. At the first place, I could immediately see that the conditions for taking photos were poor. The place was too messy and the light was really bad. So we immediately moved on to the next one. And here we luckily found a completely different situation. The light was perfect, and I immediately noticed that it would be possible to make good shots. The hug that Rosa Lunardi gets through that plastic curtain was her first hug in five months.

When describing this photo you have spoken about love and emotions. Is there something more to it?

Hmm, well actually yes. I would like this photo to be looked upon with mixed emotions. There is also a strong aspect of criticism towards the Brazilian president Jair Bolsanaro, who has not taken the covid problem seriously, simply because he and his elite are better protected than the general population.

You took a larger series of photos in Brazil to document how covid-19 has an iron grip on the country. Why do you think that the hug became the winning photo?

I had taken many photos in Brazil. In a cemetery where the covid victims were buried in long rows, in various favelas, in an ambulance and in a hospital. But the winning photos, I guess, is full of emotions, and everyone can relate to it.

How do you actually take such a photo? How much is preparation and luck? And how much is talent?

It’s a mix of a lot of things. Research is important, I’d say very important. Only through research you’ll know where the opportunity for the good photo lies. But also intuition is important. It sort of suggests you where to go and look for the good story. Another important keyword is insistence. When your intuition tells you that in a certain place there is a good photo opportunity, then you should insist on getting the good shot. And then you have to be patient.

From Russia with love

Well, in these times I often happen to think that political communication can get really tiresome. The political solutions seem to be based on a simple world. Unfortunately the world is not a simple place, as we know.

So photos explain the world in a better way?

I perceive my photos as a dialogue with those who view my photos. What I like the most is when people at my exhibitions disagree on the message of a photo. My photos are an invitation to reflect on what the world looks like. I supply the photos, and then the viewer must decide for himself what he or she wants to think. But all in all I’m very much aware of the fact that some photos contain an extremely powerful language which is able to go far beyond the one of the words. This said, of course, with all due respect for who works with the written word.

Last time you won the WPP was in 2015 with a photo from Russia. At the time why was Russia interesting?

At the time I went to St. Petersburg, homosexuals were facing great discrimination in Russia. But unfortunately also today, I guess. I was attending a demonstration and at one point a man came up to a guy standing next to me. ‘Are you gay’, he asked him. ‘Yes, I’m’, he replied, after which the man smashed a fist in the guy’s face. I was completely chocked.

Your winner photo seems to be quite an intimate situation. How did that photo come about?

By chance I had gotten to know Jon and Alex, the young Russian gay-couple. I was invited to their home. When we arrived at their place I asked if I could photograph them, and they accepted. I told them just to pretend I was not there. And so they did while I shot some frames.

When I look at your photos – both your the winner photos – but also the ones on your home site, it’s quite clear you like to get up close. I automatically think of the Hungarian photographer Robert Capa’s famous phrase ‘If your photos are not good, it’s because you are not close enough’. Is this also your philosophy?

Yes, definitely. The type of photos I make I need to be close. You could say that in a way, photography is a very relentless discipline. If you stay at a distance, your images will stink of it. The name of the game is presence, and that presence is crucial to my photos. Once in Libya in the middle of an armed conflict, where I was given the opportunity to cover up some pretty risky war action, I had to ask myself. ‘If you are not going to go all the way to the edge where the soldiers are unloading their machine guns, then what are you really going to do here?’ So of course I took of.

You mention war situations yourself. Have you ever had the feeling that your life was in danger?

Yes, several times. Everything from earthquakes to armed conflicts, dangerous areas in cities, e.g. slums but also now in hospitals with corona. But then… if you go for the good stories, then there will always be risks. That’s just how it is.

When I look at your photos and hear you speak, I have a feeling that you as a photographer are driven by an inner ethic, by your own values. Is it correct?

Let me put it this way: I don’t look for projects to promote my career. I’m looking for projects that communicate a strong message. I must have a feeling that I am needed somewhere. I need to feel that I’m making a difference in some way through my photography. In fact, I believe that a new generation of young photographers is on their way, driven by a strong political vocation. Take a topic like Black Lives Matter. Or the climate discussion. Or my own project in Russia in the LGTBQ community. These are interesting topics to many young photographers. So… yes, I am very much driven by my own morality and ethics. I very much have to feel that I’m doing something.

After winning the WPP for the second time, do you have a feeling of ‘mission accomplished’?

Oh no, not at all. I’m happy about the price,but this is not an end result. It’s just another passage along the road. You know, I haven’t been able to delete nor homophobia neither social injustice. Being blessed with a talent also means having responsibility, and then it obliges you to do something where it is possible. And I’ll keep doing that.

Mads Nissen is 41-years-old and lives in Copenhagen. He has graduated from the Danish School of Journalism and has been a staff photographer for Politiken since 2014.

In Denmark, he has been elected as “Photographer of the Year” three times, and twice he has won the Danish “Press Photo of the Year”.

It is the third time he has been nominated for “Photo of the Year” in World Press Photo which he has won twice, first in 2015 with a photo of two Russian homosexuals and most recently in 2021 with a photo from a nursing home in Brazil.