Willy Ronis series: his photographs of Belleville and Ménilmontant 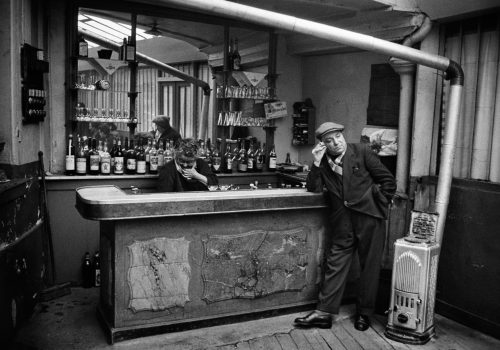 From 1985 Willy Ronis immerses himself in his photographic collection and selects what he considers the essential of his work. He made six albums including 590 photos that represent for him his photographic testament. These are the matrix of this exhibition. The Eye of photography underscores the importance of this great photographer who left us almost ten years ago by publishing each day one of the nine components of this exceptional exhibition, today: his photographs of Belleville and Ménilmontant.

At a young age, Willy Ronis began photographing Paris and the neighborhoods where he passed his time, and he never stopped. It was only in 1947, on the invitation of Daniel Pipard, a painter friend of Ronis’s wife Marie-Anne, a true child of the rue Ménilmontant, that the photographer discovered Belleville and Ménilmontant. The area was then a village contained within Paris, yet utterly unknown to Parisians who, due to its bad reputation, were too afraid to venture there. “It was a bandits’ neighborhood, one just didn’t go there,” recalled Willy Ronis.

For him, however, it was a revelation: he fell in love with the neighborhood where time seemed to stand still. He strived to portray a way of life that was simple and modest, yet marked by an exemplary sense of solidarity. He visited bistros and workshops to meet unpretentious yet deeply human individuals. He crisscrossed bowers, alleys, passageways, and backyards where he found the same happiness among craftsmen, archers, boules players, and amateur gardeners who perpetuated the décor of greenery lining the circular railway of La Petite Ceinture. Willy Ronis thus built an unparalleled testimony of bygone Paris, suffused with the gentleness of a modest and, despite the ubiquitous poverty, carefree life. “Belleville Ménilmontant was a great adventure. This was not about the accomplishment of a clearly formulated desire in my mind. This was a love at first sight…”

These photographs sensitive to the everyday life of a neighborhood and full of sympathy for people Willy Ronis crossed paths with would give rise in 1954 to his first book, Belleville Ménilmontant (with texts by Pierre Mac Orlan). The volume met with only a relative success, but it has since become a cult publication, reprinted three times, and, in 1992, was accompanied by a new essay by Didier Daeninckx.

In the 1960s, Willy Ronis kept returning to the neighborhood, to the locations of his early shots. In 1990, the Bar Floréal collective organized a tour “in the footsteps of Willy Ronis through Belleville Ménilmontant.” His photographs were posted precisely where they were first taken, pasted on billboards in shop windows and at the town hall of the 20th arrondissement. “I experienced in Belleville moments of personal happiness and of photographic happiness, which for me is one and the same, that is, happiness, period.”

Exhibition co-produced by the Mairie of the 20th arrondissement of Paris and theMédiathèque de l’architecture et du patrimoine, in partnership with the Union of National Museums – Grand Palais, curated by Gérard Uféras and Jean-Claude Gautrand.

Tuesday to Saturday from 11h to 18h Free admission