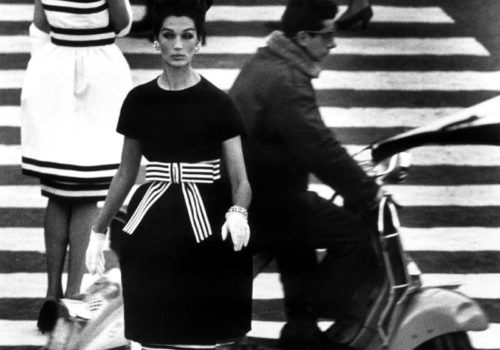 William Klein is good times, breathtaking imagery, energies swept across the universe, captured on film then printed on paper with ink. It’s a long way from the original, that moment when and where it went down, yet Klein’s photographs are always fresh, that intensity always happening anew. His photographs hit instantly, insistently, demanding our full attention, captivating us so that we focus and enjoy all that Klein encountered in his travels on earth.

Who better then to edit a collection of his oeuvre? Klein has personally selected and designed the photographs for the charming opus William Klein: ABC (Abrams Books). It is fitting that it should be a tall and slim volume that opens easily into double page spreads. Full bleed. Cinematic. No frame. It’s just one shot after the next as you turn the page. All the world is a stage and at the eye of the storm we find Klein with his camera, showing us the world as it spins.

His vision is stunning in its vibrancy, its ability to create, to captivate, to completely change our heart rate with the single image frozen like this. We are always forever now, and now is always happening so long as we gaze upon the photograph. Klein travels and finds style, character, and story wherever he goes. To consider the edit and organization of his photographs is to consider how he sees the world in which he walks.

The book is organized by city, each city infused with a grandeur and grittiness that benefits by collected effect, as he has edited seminal bodies of work into exquisitely succinct chapters in the book. ABC indeed, Klein takes us through his alphabet of urbane sophistication as lived by those who inhabit these city streets: New York, Moscow, Rome, Tokyo, and Paris. The book would not be complete without a chapter on his films, which combines photographs, advertising campaigns, and contact sheets marked with paint pens. Graphic, engaging, and inspiring, William Klein: ABC also includes an introduction by David Campany, a filmography, chronology, and bibliography. It is brilliantly conceived and executed, a treasure and a pleasure to behold.

Complementing the energy of Klein is Daido Moriyama (Tate Publishing). The small format paperback book is at once intimate and enchanting, spellbinding in its collection of still moments transfixed in the lush black and gray palette of the artist’s prints.

The book’s introduction quotes Edward Weston as stating, “The camera should be used for a recording of life, for rendering the very substance and quintessence of the thing itself…” And so it is with Moriyama one leaves the thing itself for the energy it creates. No longer are we merely looking but feeling a flash of light, a gust of wind. Air, presence, spirits, there is an ethereal feeling to these photographs, which, when placed together become a silent film as we float, flutter, and stumble through Moriyama’s world.

As Minoru Shimizu notes in the introduction, “[Moriyama] was uncomfortable with the fact that his photography was viewed as documentary and so he therefore took the photographs out of their context (a context that could be understood through the titles of the series as published in magazines), and showed them as mere pictures in an apparently random fashion. Fragments of images, from which all concrete meaning has been stripped away, appear side by side.”

The result is a semiotics of photography, a new way of looking, of seeing, of speaking through visual iconography. For Moriyama, the motif becomes metaphor, not just for the way we live today but for photography itself. Billboards, TV screens, photographs, ready-made images, and perhaps most importantly light itself become a pictorial vocabulary for our very ideas of existence.

When looking at a Moriyama photograph we are struck by how much we feel, not so much as in relationship to the content or context of the image but in the way in which light, darks and greats trigger a visceral response, a feeling and emotion of being overwhelmed, anxious, lost, found, semi-unconscious, in a dreamlike state that whispers words we cannot hear from our dreams and nightmares. It is nearly eerie to have such an intense feeling when looking at an image that is not about the thing itself but about a deeper discomfort that exists in the space between the self and the other.

Moriyama’s gift is that he allows us to dip into the darkest corners of the soul at will, to be lost at sea amidst a wreck and know that this is just one layer to our understanding of the world. We can take his images as they are, moody black and whites of modern life, or we can go deeper in the dark with Moriyama as our guide. What we find in here, we may never be able to translate, but we know it as we know ourselves, in all that extends beyond the rational world.