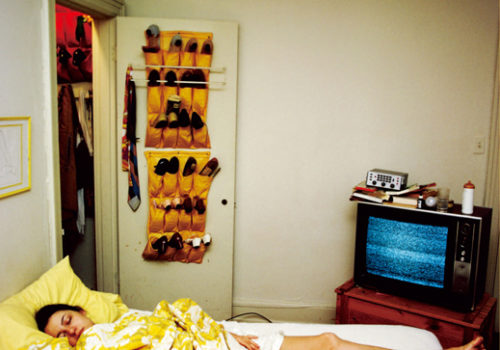 William Eggleston’s images conjure up a rarified look into the past with the artists family and friends. Thousands of words have been written about Eggleston’s mastery of color, his innovative and unconventional approach to composition, his insight into the everyday life. I wouldn’t consider trying to properly review his work with so many highly acclaimed curator’s critiques already out there, as well as William Eggleston in his own words.

‘I think of them as parts of a novel I’m doing.’ These were the first words William Eggleston uttered when asked what he felt he was accomplishing with his photographs by the late Walter Hopps, American Museum Director of the Corcoran Gallery of Art, the Menil Collection and gonzo curator of contemporary art. Another photographer from the South, William Christenberry, had brought Eggleston to meet Hopps at the Corcoran Gallery around 1970. “The three of us looked through a box of Eggleston’s 8 × 10 chromogenic coupler prints in silence. By the time I went through the prints a second time, I believed them to be the finest work in color photography I’d seen. Eggleston’s color is always naturalistic. If the color print seems lurid, that’s the way the subject was found. Calm, subtle, uncolorful subjects are photographed in just this way. Nonetheless, the subjects would mean far less if they were presented in black and white.”

Twin Palms Publishers newly released monograph, William Eggleston: For Now, is the result of film-maker Michael Almereyda’s year-long search through the Eggleston archives, a remarkable collection of heretofore unseen images spanning four decades of work. Unusual in its concentration on family and friends, the book highlights an air of offhand intimacy, typical of Eggleston and typically surprising. Eggleston remarked “the book comes close to being a family album.”

Michael Almereyda made five trips to Memphis, going through roughly 35,000 digital scans archived by the Eggleston Artistic Trust. He explains he wanted to survey “unseen, unpublished images – the B-sides, bootlegs, unreleased tracks. An air of offhand intimacy figures as something of a binding agent, in these and other images. The emotional temperature is at once tender and aloof, extending to pictures of strangers in parking lots and suburban yards, and this can seem aligned with Eggleston’s enduring fascination with frayed commercial spaces, cars, signs, cracked pavement, light bulbs, bricks, clouds; with rural porches, phone poles, pegboard, broken fences, spilled trash, ditches, puddles, architectural gaps and divides–with the spaces between spaces, the mundane, the makeshift, all the fragmentary raw proofs of civilization as a perishable human construction that, nevertheless, provides subject matter for vivid and vibrant photographs.”

“I’ve never understood why people describe my work as romantic, because I don’t romanticize the world. If you could turn back time and look at a place as it was when I photographed it, I think the picture and the place would look pretty much the same. I’ve never felt the need to enhance the world in my pictures, because the world is spectacular enough as it is.” –from Kristine McKenna’s “In Conversation with William Eggleston”
Elizabeth Avedon