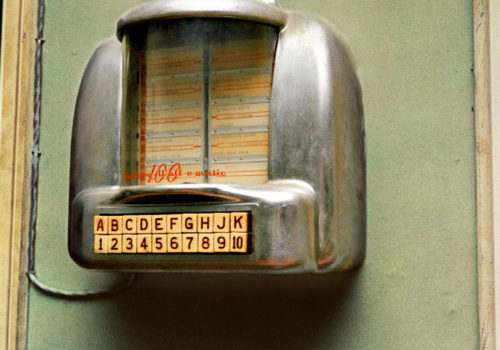 “I think of my photographs as elements in a novel I am in the process of writing.”

Deep in the heart of the ordinary—that’s where the novel sequence William Eggleston has been writing for over 50 years takes place. It is a personal, fictional story whose documentary basis can occasionally be glimpsed, despite the author’s efforts to cover his tracks. Eggleston, who has always claimed to be, “at war with the obvious,” practices “democratic” experimentation, varying his points of view, taking on the perspective of a dog (from below) a fly (from above), or even a car. This is a world seen from the inside. Eggleston photographs what he sees, notwithstanding the banal and declining appearance of the southern region of the United States he calls home.

In this, his work is in keeping with the American art scene of the 1960s, which saw the advent of Pop Art, Andy Warhol’s Factory and, for artists, a growing interest in photography, as when Robert Rauschenberg declared: “There is no such thing as a poor subject.” A critique of the emerging consumer society is the subject of many works, and the viewer witnesses a gradual disappearance of a hierarchy among the objects, a trend the painter Edward Hopper had initiated some twenty years earlier.

The exhibition William Eggleston: From Black and White to Color, revisits the birth of the photographer’s creative process, taking the viewer back to the dawn of the 1960s, when Eggleston, realizing that the time was right to subvert a number of conventions, set out to trivialize his photographs, to make them “snapshot-like” as he gradually transitioned to color.

I was somewhat surprised to see so clearly the influence of Henri Cartier-Bresson on Eggleston. The former had reinvented photography in the 1930s, and the publication of Images à la Sauvette was an important model for many photographers. “It was the first time I had seen photographs that weren’t entirely frontal,” Eggleston said in 1994. “He framed like Degas and Toulouse-Lautrec, one photo after the other. I thought I had understood Evans, but my true discovery was Cartier-Bresson.”