Whitewall, in the den of a modern factory 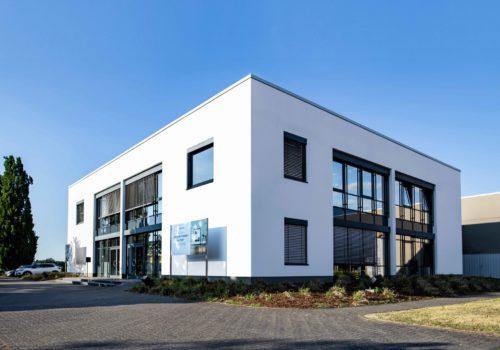 In 2022, the German photographic laboratory Whitewall revealed at Paris Photo the largest print ever shown at a photographic fair. A pioneer in its field, the company occasionally opens the doors of a modern, functional factory.

Pushing open the doors of a factory is always a source of wonder. With literature as a reference, one expects to discover a new Germinal. One imagines swarming through the corridors, passing through the vapors, finding a pipe that would connect the beating heart of the activity to ten other nerve centers. In the case of printing, one would like to find a few large rotary presses that would produce, as in the case of the written press, photographs in a chain. In itself, we know nothing about modern photographic printing, and even less about our factories, unless we know a little about them. The workers have not disappeared, but as Joseph Ponthus reminded us with Feuilles d’usines (2018) or François Bon in Sortie d’usine forty years earlier, the factory no longer interests many people (wrongly).

Created in 2007 by Alexander Nieswandt, the German firm Whitewall is located in the suburb of Cologne in Frechen. Several times elected best photographic laboratory by the Technical Image Press Association, it is, along with Picto, the reference in large-scale photographic printing and collaborates with numerous artists, museums and foundations, galleries or private individuals. In moving to the Rhineland, the company is also following a historical tradition of German chemistry and printing that dates back to the 19th century.

Its factory is a model of parsimony and fluidity, reminiscent of Fayol’s model, applied in organizational theory. Opposed to Fordism, which advocates an infinite division of time and a distribution of tasks allowing for frenetic production, the engineer Fayol, with the Meunier company as a case study, advocated an integralist model integrating the know-how and technical skills of his engineers and workers into the company and its production chain.

If the rationalization of tasks is indeed at work at Whitewall – productivity obliges -, the trust given to the trades prevails. The company shows little turnover in its key positions and seems to be able to work with the same men and women in the laboratories, laser printing, cutting and framing. It will soon enter a training cycle for these same jobs by offering long apprenticeships, similar to the French model, in order to train and keep qualified technicians and engineers under its wing.

Whitewall responds to the Fayol model in the freedom given to its employees. A slight breakdown can occur on a cutting machine and the knowledge of the technicians allows to fix it in about fifteen minutes, by cleaning the silos or by opening the cover, with light or medium repairs without the intervention of an external firm. Whether they are dedicated to paper, books, newspapers or works, printing plants are frequently characterized by this trust given to technicians. They maintain a dependence on their know-how, their feeling, the fluidity of their gestures and one can see there, romanticism apart, a form of interdependence.

The factory itself responds to a model of fragmentary organization. It is divided into several blocks which correspond, in a rather logical way, to the production line of a photograph. Whitewall does not respond, like some factories, to fixed models. It accepts all types of square and rectangular formats, up to the famous Masterprint which distinguished it at Paris Photo. Responding to this diversity of formats requires an extremely well-oiled organization, both in the layout of its spaces and in the follow-up of the prints.

After the reception of the files from the customer and the computerized treatment of the images, the printing begins in the laboratory. The choice of black and white or color printing, and then the choice of support – high quality paper, Canson, Epson or Hahnemühle, flexible supports (advertising canvas) or rigid supports (metal print, aluminum, etc.) – influence the printing in the laboratory. Whitewall has several laboratories which, divided into several cells, are illustrated here and there by more or less gigantic printers, of Italian or German brands. After printing, the photographs are dried or laminated on aluminium Dibon.

The prints are then sent, for some of them, to be put under glass or Plexiglas. The cuts are also made to the appropriate size, without any standardization other than the limit of the machine, before the whole is sent for framing. Whitewall has its own cutting workshop, its own framing workshop and its own mailing cell, all three representing a factory staff of about ten employees. The rationalization of its supply chain is materialized in a simple barcode allowing the follow-up of the printing at each of these stages, a logical process, but improved to the extreme by the company.

In this factory, everything seems horizontal and functional. The factory is compact, it is fluidity at work, elusive and at the same time fascinating when observing the technics, which gradually, brings out the image.