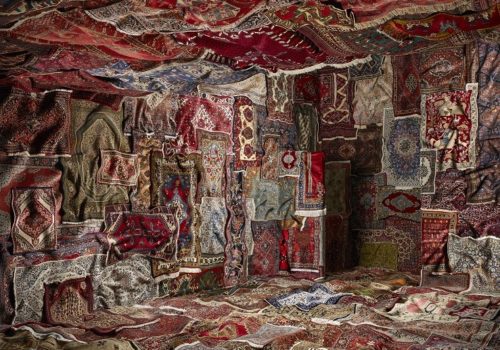 The 2021 edition of Paris Photo witnessed a small but impressive event, that is as much a technological prowess as of a fascination for an oeuvre.

Artist Mona Schulzek and photographic printer Whitewall presented the largest print ever shown at the Paris fair. A “Masterprint” measuring 320 x 240 cm. The Eye of Photography met Mona Schulzek and Alexander Nieswandter, founder and director of Whitewall. These “Masterprints” can be even larger, up to 500 x 240 cm. A size that does not detract from the quality of the print.

Arthur Dayras (A.D.): Mona, what was the idea behind the series “Ottomane”?

Mona Schulzek (M.S.): The idea was to transform a room in its sculptural aspects, to deal and see a room like a sculpture, as if it was a piece of wood or piece of stone. It was constructed in a hall with Persian carpets. When you’re standing far away from the picture, you see a collage of colors. And when you’re nearer, you see Persian carpets, different Persian carpets. And slowly you discover the room. The image is based on the sculptural aspect. You’re looking at the picture the same way you’d be exploring a sculpture.

A. D.: It’s mostly a play on sculpture, on space and on collage.

A. D.: Cosmos has been a key element in your work, especially with one of your recent series, “Outer Space Transmitter”.

M. S.: The “Outer Space Transmitter“series is conceived as an antenna, where messages can be sent into outer space. These messages are mostly art images, like text-images, which differ from verbal communication that were sent previously in outer space. The process starts with a message you could write. I transform this message into an extraterrestrial alphabet I designed by myself and then I build an image.

A. D.: How did you create the alphabet?

A. D.: It reminds me of Galaxia Wang, an artist who also created his own alphabet and language, called Colossia, and most widely, invented a whole cosmogony. In his case, Colossia allows him to apprehend and express his synesthetic perception of the world by combining colors, smells, feelings or even faces into his own codification.

M. S.: Communicating with a different language that couldn’t just be spoken was the key idea in this photograph. It was about expressing the smell of the room, of tapestries, or the very own language of ornaments. I believe they are hidden stories in these objects.

A. D.: The picture can also be viewed through the prism of space. The ceiling for instance is somehow quite difficult to apprehend because of the superposition of carpets.

M. S.: Yes, I consider this picture as being in weightlessness. Where’s the ceiling? Where’s the ground? There’s a funny story in a museum where I presented this picture. The curator put the piece upside down, I was like “oh yeah, it looks great, but it’s the other way around”. But my professor at the ecosign academy always told me “a good picture is a picture you can works on every side”. Whenever, however you turn it, it will remain a good picture.

A.D.: What were your references when you first thought about this picture? Were there any conceptual artists you’ve look at, referred to?

M. S.: I was more inspired by scientific research, mostly from NASA. The images from the Hubble Space Telescope show deep insights into the past of the cosmos.

A.D.:How did this research led you to a conceptual approach of space and how do you connect outer space with traditional elements like persian carpets?

M.S.: The carpets represent the image of a traditional Persian garden. It is embellished by flowers represents the four parts of the world, which surround a centre with a pond and a fountain. So the garden is a carpet where the entire world archieves its symbolic perfection, and the rug is a sort of garden that can be moved through space. That was said by Michel Foucault and what was really inspiring to me, was the idea that the garden is the smallest plot of land in the world and then, it is the entirety of the world.

Whitewall was founded in 2007 by Alexander Wieswandter. The printing house immediately specialised in high quality prints. The company and its workshops are located in Frechen, Germany, before opening shops in Düsseldorf, Hambourg, Munich, Berlin or Paris. Today, Whitewall has 180 employees and collaborates with photographers, museums and galleries all over the world. The company has been awarded 4 times best photographic laboratory by the Technical Image Press Association (TIPA).

What Whitewall calls “Masterprint” is based on photographic printing on acrylic glass. The printer developed by Nieswandt and his engineers remains a unique machine in the world, the only one capable of making a print of impeccable quality in such large formats.

A.D. Tell us the story of The WhiteWall Masterprint.

Alexander Nieswandt (A. N.): For galleries and artists, we saw a great potential for very large art prints. It was impossible to print a very large photo without having a collage, a composition of different images, in high quality, which we called “C-Print”. A very large image printed with laser on photographic paper, with the right chemicals, just didn’t exist. For this reason, we decided to create it and developed a new printing system. We hired several technicians and engineers to whom we said: “We need a big printer, much bigger than the current standard. It took us three years to achieve the goal. But the effort was worth it. Now we present a technological revolution with a unique production method. Our Masterprint perfects the production of photographs in previously unimaginable sizes of up to 500 cm x 240 cm, seamlessly printed and laminated under gallery acrylic glass. It is the world’s first and only pigment ink-based fine art printer capable of printing up to 240 cm wide. The result is a high-resolution fine art print that delivers amazing detail with genuine Epson pigment inks. We have created an absolute revolution in the photographic industry.

A.D.: The project you did with Mona Schulzek was a commission from Whitewall to the artist, correct?

A.N.: Yes, we are very happy about the collaboration with Mona. Her work from the ‘Ottomane’ series is predestined for our master print. Mona sent us her image data and our Professional Art Service took care of everything. With such a work of art, many arrangements, quality controls and some test prints are necessary. She also visited us in Frechen and got an idea of our lab. And in the end, this great print came out. That is a real satisfaction.

A.D.: Are you affected by the current paper crisis?

A.N.: If the manufacturers can no longer supply paper, we are of course also affected. Now, paper is in short supply for everyone. For this reason, we have taken precautions and have already ordered paper for two years.