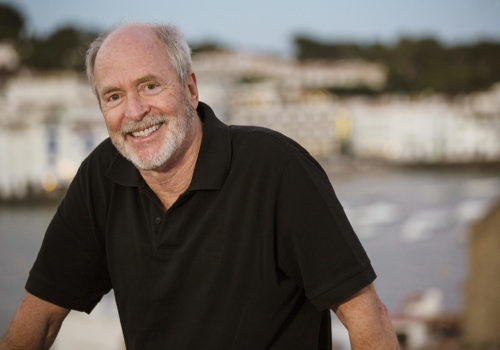 Famed for his stunning and iconic images, Greg Gorman is a legend. Not only because he has been moving and shaking the Hollywood portraiture industry for more than 50 years, but also because he is one of the three photographers whose works have shaped the Hollywood myth.

In 2013, I had the great pleasure of meeting him during his first exhibition at the Helmut Newton Foundation in Berlin, and have been working with him on a regular basis ever since.

After the successful release in summer 2020 of his monographic book, It’s Not About Me, he recently opened his new solo show at the Munich-based IMMAGIS ART PHOTOGRAPHY gallery, curated from that book. The show comprises stunning photographs shot between 1970 and 2020, giving great insight into Gorman’s distinctive and impressive body of portrait photography. Many of these images have not been shown until now, and bear very special insights and stories. This was the impetus for us getting together last week and talking about “what’s new?”

Nadine Dinter: You just opened a new exhibition, called It’s Not About Me, at your Munich-based gallery, IMMAGIS. Tell us a little bit about the content of the show.

Greg Gorman: When I began this project, the focus was putting together a career retrospective from the celebrity side of my journey rather than the fine art figure studies. I had more than 160 boxes of transparencies and contact sheets to sort through in addition to terabytes of digital files. The process of the initial edit took over a year, working diligently every day for many hours. I realized after that endeavor, I needed to step back for a while and let everything sink in. Six months later (once it had settled in), I began making a finer-tuned edit. That resulted in just over a thousand images, of which roughly 350+ made the final cut.

Browsing your images in the rooms of the gallery, one discovers a very early photograph of Jack Nicholson, flipping his tongue. Was spontaneous momentum the best way to catch him for this very special image, rather than setting up a backdrop during a scheduled session?

GG: I had just finished film school at USC [University of Southern California], and was actually covering a party for the premiere of the book, The Love Machine, by the late Jaqueline Susann, and was overwhelmed with the number of A-list celebrities attending, as you can imagine. I saw Jack sitting there, appearing to be rolling a joint. Not really sure, I just grabbed this snap. It was in his early days around the time of Easy Rider and Five Easy Pieces. My five minutes as a paparazzi!

Another portrait that caught my eye was your recent photograph of the scandal-ridden Heidi Fleiss. The image reveals a mysterious depth in her eyes; that’s what makes it so special, even though we don’t see much of the rest of her. When did you both meet and how?

GG: I met Heidi right before she began her three-year incarceration for the oldest profession in the world (although they claimed income tax evasion). I was photographing her for the 20 Questions column in Playboy magazine and absolutely fell in love with her as a person. She was very real and vulnerable. We wrote each other during her time away and reconnected once she was free. You often hear people being described as difficult or problematic but usually these are the least complicated and most accessible people, because there is no bullshit attached. My reputation of being friends with so many “outsiders” stems from this philosophy, because they are basically honest people that don’t need to hide behind the facade of an alter ego. On the occasion of this image, Heidi was joining me for a small dinner in my home during Covid, and when I opened the front door, I knew I had to capture this image. I told her to go directly up the flight of stairs into my studio before introducing her to my guests! Thus, this photograph was born.

The show is called It’s Not About Me. Is this your personal take on how you see yourself as a photographer? After all, you are a star yourself, and one of the three photographers whose works have shaped the official image and glamour of Hollywood.

GG: No actually, it was my creative director and good friend, Gary Johns, who came up with the title. However, it more often refers to the fact that I always put the talent front and center and make them the focus of the final image. I let my style and lighting speak for me, most often relying on very little propping or artifice to create my portraits. Minimal backgrounds and tight crops express the soul of the person in front of my lens.

When entering the rooms, you are welcomed by an overwhelming enlarged photo album, consisting of selfies of you and the celebrities you have portrayed. There are early ones of you with David Bowie, Kirk Douglas, Traci Lords, Ru Paul, and Michelle Pfeiffer, as well as many more. Do you ever embark on a trip down memory lane and flip through all those memories, or do you prefer to plan ahead and make plans for the future?

GG: No. I just thought it was fun to revisit the snaps as sort of a time stamp representing my 50 years in the business. Few are really selfies – something I rather tend to avoid for the most part. I never asked Brando, De Niro, or Pacino for a photo, even though it might have been nice. I guess I felt that was a bit out of place asking such a question, especially since we were creating art as peers and that might have seemed strange!

Besides your Hollywood portraits, you are famed for your exquisite nude photography –from the iconic images you shot of Tony Ward and Brigitte Nielsen, to your many brilliant works for the German Playboy, among others, such as of Sonia Kirchberger, Arabella Kiesbauer, and Uschi Obermaier. What is the difference in approaching and preparing a clothed versus a nude session, and what technical challenges are there to overcome or master in both genres?

GG: Obviously the most important element in both portraiture and figure study is a strong level of comfort and trust between the subject and the photographer. Building up one’s confidence, as well, is key to creating a successful image – whether it is a portrait or a nude. Very little other differences exist. I have as few people as possible on set for either image, as in almost every case they are distracting and take too much energy from the subject.

Besides shooting on commission, you started teaching photography and giving workshops all over the world. Have you noticed any cultural differences in the perception of photography? For example between how German a photo aficionado works compared to Norwegian participants or Americans?

GG: The only strong cultural difference I always notice in every aspect of life is that Americans are more hypocritical and less open, in comparison to their European counterparts. Teaching in Europe, I find that people are more willing and open to taking chances and failing, as opposed to taking the safe and guarded route. That route rarely leads to growth and creativity. Those willing to push their limits almost always improve their skills as artists, which goes without saying.

For the past months, you have been working on a new, quite different series, which evolved from the time when we all had to stay at home due to Covid-19. Would you like to tell us a little bit about that new subject matter?

GG: At the beginning of this year, I gave myself a self-imposed assignment. I once vowed I would never shoot anything that couldn’t talk back to me. With the onset of Covid and the lack of human interaction, I decided to photograph my collection of African tribal art. Working with the latest technology, with Rotolight’s LEDs – The Titan X1 – and my newest camera system – Fuji’s GFX 100 & 100S cameras – I went about creating over 160 unique images with the involvement of my creative director, Gary Johns. Our joint collaboration has produced what has been a most enjoyable experience, and some interesting but quite different fine art. A book is in the works, with Nadine Barth and Hatje Cantz publishers in Berlin.

What are your next projects and shows coming up?

GG: My debut show for It’s Not About Me at Fahey Klein in Los Angeles has just recently closed, but I currently have a show at IMMAGIS Fine Art Photography in Munich, running through December as well as a show opening this week in Dusseldorf at the Photo Gallery Paffrath. My curator, Anke Degenhard, is currently scheduling the balance of the tour for next years, which will be announced forthcoming. My current project, as I mentioned, is African Case Studies, which is in production.

What’s your advice for young photographers starting out in the business of photography?

GG: Find another gig, LOL! Everyone today considers themselves to be a photographer, with their cell phone and a version of Photoshop or the equivalent to improve their already automated pseudo skills. It’s a tough gig these days! I do not envy those with a passion for photography in this current world! But on a serious note, for those that do, I would say: Follow your heart and try to find your own voice and style as an artist. Be true to yourself and never settle for less. Own your vision.