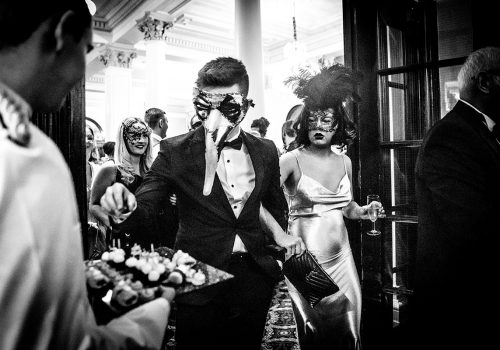 Benita Suchodrev’s bio reads like an international whirlwind, and yet couldn’t make more sense once you’ve met her. Born in Russia, moving to the US at the age of 15, and then starting a life in Berlin in 2008, Suchodrev holds a bachelor’s degree in Liberal Arts with a focus on Art History, a Master of Arts in English Literature, and a degree from the Neue Schule of Photography, Berlin. Drawn to the poetic and the bizarre, the bold and the vulnerable, her work is known among photo connoisseurs – at the latest since her book 48 Hours Blackpool, for which she was just awarded with the Publikumspreis at the Wiesbadener Fototage photography festival. Now she’s back for more and recently released her new blockbuster book “Of Lions and Lambs”, also published by Kehrer. So before you get a chance to meet her at Paris Photo for the planned book signing from 7–11 November, discover what’s new with Benita Suchodrev.

Nadine Dinter: You grew up in Russia and moved to the US at the age of 15. Since 2008 you have been based in Berlin. How do you handle and live with those 3 quite different cultures? Is one more dominant than the other in terms of how you see the world?

Benita Suchodrev: I feel like an amalgam. I see myself and the world from multiple perspectives simultaneously. Depending on circumstances, certain perspectives predominate. I am used to complexity and I have learned to alternate between my different ‘identities’. But if I had to simplify, I would say that my emotional and intellectual traits are closely related to my Russian roots whereas the more resolute and down-to-earth aspects of my personality were probably “made in the USA” ;). With regards to German culture – I live in Berlin, which is very cosmopolitan and therefore quite complementary to my disposition and multi-cultural background.

ND: Your last book “48 Hours Blackpool” has received rave reviews from the media and great attention from the photography scene. How did you come up with this location and the idea to photograph there? Had you been there in the past or did you “land” there by accident?

BS: My first visit to Blackpool was based on a conscious decision, so I wouldn’t call it an accident. How I came to this decision is another story. I traveled to Blackpool with the intention to photograph a colleague. And I did, but as it turned out there was a bigger plan in store. In the few days that I spent in that town, I was so taken by the atmosphere and the people that I found myself caught in a trance of sorts. I ended up shooting morning to night and returning to Berlin to discover that I have enough material to fill a book.

ND: In this series, you reportedly worked and shot fast, as you also do when documenting the Berlin nightlife. Have you ever worked on preparing a photography project over months down to the last detail, or is “point and shoot” more your thing?

BS: Both are my thing, but from each I derive a different kind of satisfaction. Projects like Puppet Masters or Woman in Heat, for instance, did not result from the kind of “point and shoot” approach you could attribute to 48 Hours Blackpool. The images in these projects were created following much conceptual and visual preparation; there were interviews involved, an extensive selection process of models, costumes and props. But I do like to work spontaneously and fast, so I rarely prepare months in advance, mostly I plan as I go. Ultimately, whether I shoot in the studio or on the street, I always work intuitively, only that on the street my intuition runs wild whereas in the studio it is sometimes ‘bridled’ by analysis.

ND: Do you feel that such a portrait of society would be possible in your native Russia or in the US?

BS: Each society has its own face. Maybe certain aspects of what you see in 48 Hours Blackpool could be found in Russia, if you look closely enough and in the right regions, but I would guess that the chances to produce a portrait of society similar to what you see in Blackpool would be higher in the US.

ND: In your recent series “Puppet Masters” you quoted Kleist and devoted the exhibition to the history of theater art, with the transformation and the unseen fusion of the living master and the dead puppet, sharing one soul and mind. What was your inspiration? Did you take a more philosophical approach or were you also a big doll admirer as a kid?

BS: As a child I had always felt attracted to the performing arts and to costumes and enjoyed exploring notions of personal identity through various projects drawing on drama and narrative. As I matured, my work became more and more infused with philosophical undercurrents. When Puppet Masters came about, I was compelled to think about the art of puppetry in a contemporary context and approach it conceptually as something greater than what it seems to be at first glance. In the process I realized that the art of Puppetry is as abstract as it is concrete, as mysterious as it is apparent. That it is an intimate and tacit communication process that is made public. To this extent, one could say that we live in an era where intimate and public spheres have crossed, where communication boundaries have blurred and the notion of ‘identity’ and self-image, fake or real, attractive or repelling, exceptional or ordinary took center stage. The ways in which images are crafted, performed and publically displayed today often seem as a riddle and often as a grotesque joke when by ‘costuming’, ‘masking’ and creating fictitious ‘narratives’ the person becomes the punch line. Today perhaps more than ever an image is not just an image. It is a performative, ubiquitous act, at once grand and meager but always big, presented on a big stage to an even bigger audience.

ND: Your new book “Of Lions and Lambs” will be released this month by Kehrer Publishers. In it, you revisit the city of Blackpool, entering the inner circles and locations frequented by the “lost souls” you photographed outside on the streets for “48 Hours Blackpool”. What made you go back? Did you make friends there? Did you feel that your mission wasn’t quite fully accomplished?

BS: My decision to return to Blackpool came unexpectedly. In fact, in my TV interview about 48 Hours Blackpool I was asked if I was planning to go back, and I remember shaking my head; I thought I was done. Then one winter day I receive an email from someone who found an old newspaper article about Blackpool and thought I might like to read it. When I did, I realized that my work was not finished. My second trip to Blackpool in February 2019 resulted in this book of 368 pages that reveals another, perhaps most critical aspect of this historic coastal town. If 48 Hours Blackpol penetrated the surface, then the sequel Of Lions and Lambs dives beneath it. It offers a look behind the famous ‘amusement mile’ by focusing on local characters rather than on tourists rushing along the promenade, contributing to a somewhat quieter pace and a more contemplative mood throughout.

ND: What is your day-to-day life as a photographer like? Where do you find your inspiration? In the visual or performing arts, cinema, events?

BS: My day to day life is a synthesis of two selves, the private and the professional. Being a photographer, an artist, means you are ‘working’ a 24-7 job. Mentally you never truly disconnect from your work, not only because you are constantly busy thinking about efforts and results but also because images and ideas are always present inside you and outside. Every idea that leads to a new project is just another single piece in an ever-changing puzzle.

For inspiration I can turn to literature and to painting, but cinema is definitely at the top of my list because it unites the visual and the verbal; I dedicated a good portion of my college years to writing about film. It is a bottomless source of inspiration. And the search for inspiration is an endless one.

ND: Does Berlin still inspire you? Or have you already started thinking about your next destination?

BS: I like Berlin. Some days it inspires me more and some days less. I hardly know what it’s like to live a life not thinking about my next destination.

ND: What are your plans for exhibiting “Of Lions and Lambs”?

BS: The book is just coming out, so my planning is in progress. Like 48 Hours Blackpool, which was exhibited at the Willy-Brandt Haus, I’d like my new project Of Lions and Lambs to be presented in a great space and in a suitable context, this time outside of Berlin. I am open for invitations!

ND: What is your advice for the new generation of photographers?

BS: Unless you are a commercial photographer, don’t try to create work ‘for the market’ by trying to guess what the market wants. Create work for yourself, answer to what you want. And then, if the market wants you, consider yourself lucky. So much out there is out of our hands anyway. Being true to yourself is the best shot you’ve got.

Thanks so much, Benita, for taking the time to share your latest thoughts and news with our readers!