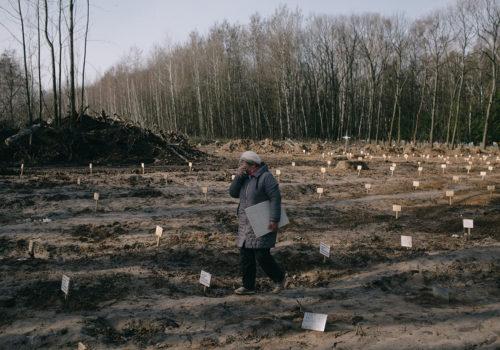 The W. Eugene Smith Memorial Fund announced the list of finalists in the 43rd annual W. Eugene Smith Grant for Humanistic Photography. Finalists have also been named in the 5th annual Smith Fund’s Student category and 26th annual Howard Chapnick Grant, which is awarded to encourage leadership in any field ancillary to photojournalism, such as picture editing, research, education, and management. The Smith Fund also announced that it will return to its longtime tradition of awarding one individual photographer with a $40,000 grant.

The Phillip and Edith Leonian Foundation, a longtime supporter of the Eugene Smith Fund, extended their contribution to The Fund, allowing its Fellowship grant to increase from $5,000 to $10,000, and its two Finalist grants from $2,500 to $5,000, beginning this year. “We are beyond grateful to the Leonian Foundation, and this year’s fellow and finalists will immediately benefit from The Phillip and Edith Leonian Foundation’s expanded support and contribution,” noted Scott Thode, president of the W. Eugene Smith Memorial Fund.

Since the Smith Fund’s inception in 1979, it has awarded more than $1.3 million to photographers whose past work and proposed projects follow in the tradition of W. Eugene Smith’s career as a photographic essayist. Despite economic headwinds and continued challenges surrounding the pandemic, the Smith Fund grants received several hundred entries from 72 countries this year with the Student grant and Chapnick grant each receiving the most entries ever. Grant recipients will be announced in October, however the Smith Fund Board of Trustees confirmed that a formal, in-person award presentation is not planned for this year.

“The quality of entries for all three grants seems to get better every year and this year was certainly no exception,” said Scott Thode. “I know the judges had some very difficult decisions to make and want to thank them for their time, expertise, and passion. I hope they enjoyed the process.”

The following is a list of finalists for the 2022 W. Eugene Smith, Howard Chapnick, and Smith Fund Student grants.

“It was a tremendous privilege and responsibility to review several hundred applications submitted for the W. Eugene Smith Memorial Fund Grant and discuss the many timely and worthy projects with my fellow jurors Eli Reed and Naveen Kishore,” explained Michelle Dunn Marsh, Chair of this year’s Smith Grant jury committee and a Smith Fund board member. “In fact, the quality of entries was so good that the judges needed to review entries over and over to finally reach a consensus as to which projects would be deemed as finalists.”

“It is a great honor for us to be named a finalist of the W. Eugene Smith Fund Memorial Grant,” said Amit Madheshiya who, along with collaborator Shirley Abraham. “The honor comes with a massive responsibility to pursue photography resonant with humanistic tradition. This support would enable us to create the work that shines the light, where injustices have been thriving in the dark,” he added.

“As adjudicators, we wanted to look at the Howard Chapnick grant not only as a grant for great proposals, but to evaluate how these proposals reflect career commitments,” John Fleetwood, Chair of the Howard Chapnick Grant jury explained. “Those people who make photography happen and without whom we would not see the kind of work coming from many areas. Many of the great proposals submitted varied in scope and purpose; from research, education, project-based, participatory, online, festival, community, socio-political action, etc. This is so important as it speaks to photography’s wide and diverse practices,” he concluded.

“I’m grateful for any opportunity to amplify the work and voices of visual storytellers from Asia, and I hope that this acknowledgement from the Howard Chapnick Grant will help further my efforts as I continue my work,” said Jessica Lim, a Chapnick grant finalist based in Cambodia. “I also want to deeply thank the team behind the grant and the W. Eugene Smith Memorial Fund for their invaluable and continued dedication to supporting photographers through such initiatives, and I hope they will be able to continue do so well into the future.”

“There was a great range of approaches and meaningful commitments to social justice issues in the applications,” Noelle Flores Théard, chair of the jury, said. “All the finalists were incredibly thoughtful about how their photographic work impacted the individuals they photographed. Overall, we as the jury were heartened to see creative approaches to documentary storytelling and are very excited to see how these projects develop.”

“Being named a finalist in the W. Eugene Smith Grant is undoubtedly very prestigious,” commented Sumi Anjuman, a student finalist from Bangladesh. “At the same time, I believe this acknowledgement will motivate me immensely in my future endeavors.”