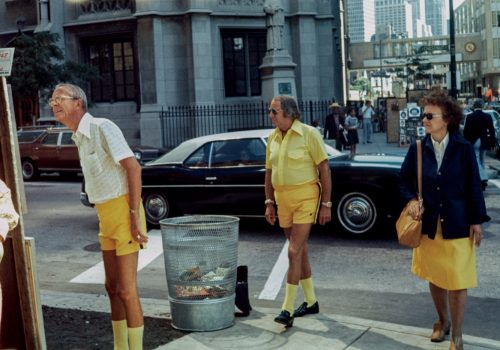 The color work of street photographer Vivian Maier is the subject of a new exhibition at Howard Greenberg Gallery through March 2, 2019. Many of the photographs are on view for the first time, deepening the understanding of Maier’s oeuvre and her keenness to record and present her interpretation of the world around her. Dating from the 1950s to the 1980s, Vivian Maier: The Color Work captures the street life of Chicago and New York, and includes a number of her enigmatic self-portraits.

The exhibition coincides with the publicaton of Vivian Maier: The Color Work originally published by Lothar Schirmer and in USA byHarper Design | HarperCollins, the first book devoted to her color images. With a foreword by renowned photographer Joel Meyerowitz and text by Colin Westerbeck, a former curator of photography at the Art Institute of Chicago, the book was created in partnership with Howard Greenberg Gallery.

“Maier was an early poet of color photography,” writes Joel Meyerowitz in the foreword to the book. “You can see in her photographs that she was a quick study of human behavior, of the unfolding moment, the flash of a gesture, or the mood of a facial expression—brief events that turned the quotidian life of the street into a revelation for her.”

Since 2010, Maier’s photographs have been exhibited in museums and galleries worldwide. The 2013 documentary film, Finding Vivian Maier, co-directed by historian John Maloof (who discovered her work at an auction in Chicago in 2007), was nominated for an Academy Award.

Vivian Maier (1926–2009) was born in New York City, spent much of her youth in France, worked for 40 years as a nanny mostly in Chicago, and photographed consistently over five decades. When she died, Maier left behind more than 150,000 photographic images—prints, negatives, transparencies, and rolls of undeveloped film—though few had ever heard about or seen her work. Maier’s color work was made during her last 30 years. After retiring her signature Rolleiflex, she began working with a 35-millimeter camera and produced roughly 40,000 Ektachrome color slides.

“Maier was a self-invented polymath of a photographer,” writes Colin Westerbeck in the book. “The one advantage Maier gained from keeping her photography to herself was an exemption from contradiction and condescension. She didn’t have to worry about either the orthodoxy or the approval of her peers.”