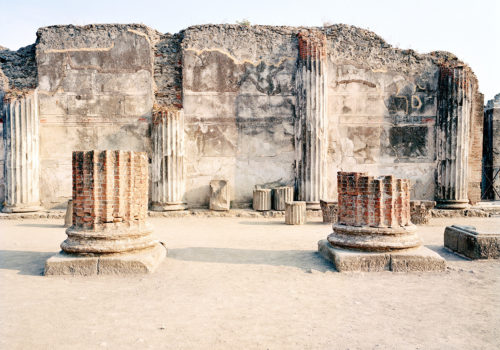 In his “Voyage en Orient”, Gustave Flaubert devoted several pages to his visit to Pompeii which he made in 1851. The events which are devoted to him today are the occasion to exhibit  work by the Italian photographer Claudio Sabatino who has for several years already carried out work on this mythical heritage; and thus establish a dialogue between two visions of the same place, more than a century and a half apart.

Flaubert’s text reveals an approach that is essentially that of a curious visitor, wishing to keep track of everything he discovers as he travels through the site. Without dramatizing the subject by evoking the eruption of Vesuvius, nor adopting the posture of an archaeologist, he delivers a collection of notes on what it is then possible to see of the city, questioning as a cultivated man. and learning informations on certain buildings.

In Claudio Sabatino’s project, an approach emerges that could be compared to that of Gustave Flaubert. The photographer walks the site in complete freedom, with no other mission than the one he has set for himself: to shape a personal perspective and respond to an artistic requirement. He does not aim for documentary exhaustiveness but favors the visual unity of his images, both in terms of colors and lights.

The exhibition brings together some fifty works by Claudio Sabatino which recount his journey through the city of Pompeii; the whole being completed by several photographs taken in the region and which testify to the presence of Roman ruins in the middle of the urban landscape. A room in the abbey’s lodge devotes a selection of excerpts from Flaubert’s “Voyage en Orient” on places as they were photographed by Sabatino. And this confrontation of texts and images is enriched by some old photographs of Pompeii taken by Giorgio Sommer ten years after the passage of the writer.

This dialogue between Pompeii from the Flaubertian century and this site as it is today echoes, on the thematic register of the ruins, the majestic presence of the Abbey of Jumièges.