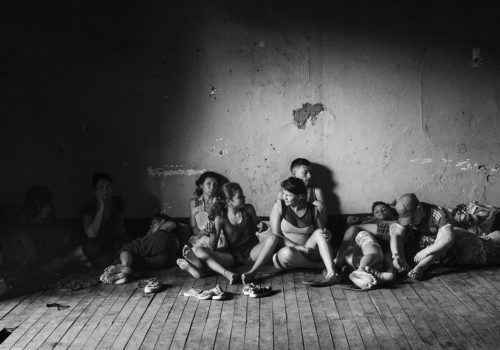 Due to the pandemic, the ANI has decided for its 17th edition to exhibit the three awards ANI-PIXTRAKK from the last three years 2019, 2020, and 2021.
The six other winners will be screened at the opening on March 16, 2022, at the École des Gobelins in Paris.
These three photographers have been selected among the favorites of VISA POUR L’IMAGE-PERPIGNAN. The ANI Visas are the result of a collaboration, which began more than 20 years ago, between VISA POUR L’IMAGE-PERPIGNAN (International Photojournalism Festival) and the National Association of Iconographers.
During the professional week of the festival, the ANI organizes in this context, readings of portfolios and meeting on this occasion beginner and / or confirmed photographers. The winners received the ANI-PIXTRAKK prize, worth €5,000, during the screening evening in September, in Perpignan.

Nicoló Filippo Rosso (Italy) : « Exodus »
In 2016, a political and socio-economic crisis forced many Venezuelans to leave their country. The reasons given are violence, lack of food, medicine, lack of essential services, and the loss of wages linked to the political situation. According to the UNHCR, in October 2019 around 4.9 million Venezuelans left their country, including 1.6 million to Colombia. Others crossed Colombia, and settled in neighboring countries. Venezuela has closed its borders with Colombia which led, in February 2020, to the presence (or emergence) of 300 clandestine points, currently still active to cross the border.

More than half of Venezuelan migrants in Colombia have no regular status, no health coverage, no access to education, or to the world of work. Charities or NGOs provide medical care and food. Many people end up living in makeshift camps or on the streets.

At the beginning of 2020, the Colombian government created two new residence permits which gave more than 100,000 Venezuelans permission to work. Parents whose children were born in Colombia can acquire the nationality, but many migrants remain destitute and without status.

Born in 1985, Nicoló Filippo Rosso is an Italian photographer based in Colombia. With a literary diploma from the University of Turin in Italy.
In 2011, he became interested in photography while living in an indigenous community in the region of Putumayo, in the Amazon.
He works on long-term projects and also on editorial assignments for clients such as Bloomberg News, The Washington Post, BusinessWeeknd, Le Point, Der Spiegel, Sette Corriere, Vice, Internazionale, Il Reportage and for international NGOs such as Americares, and Catholic Relief. Services (CRS).
Since 2016, Nicoló has been observing the impact of mining operations and the inhabitants of the La Guajira peninsula in Colombia. A work exhibited throughout the world and published in the international press.