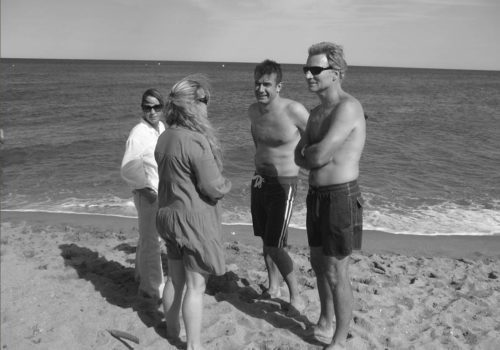 In 2012, Chris Laffaille wrote about the traditional Paris Match lunch during the festival.

Paris Match organizes an annual lunch on a beach near perpignan. Roger Thérond, the director of Paris-Match, welcomed his friends and collaborators.

Since his passing in 2001, this place has become a place of pilgrimage to pay homage and greet the one who knew best, “the match spirit”. And to honor the man who for half a century brought French photojournalism to its summit.

Everyone loves “the beach of Match”.

This is a must for the “people of the photo” who rushed to Perpignan every year for Visa pour l’Image.

It is true that over the years, this “rendez-vous” a little intimate and family oriented in this solitary and hidden place of the Roussillon coast has become a small phenomenon in itself.

For some, to be invited is a consecration, even if the invitation cards do not exist … Others force the door a little, as sometimes requires our job.

And it’s good war. Because it’s finally the place – it seems – where you have to be.

The only difficulty is to get there …

But the spirit of this wonderful annual meeting in this corner out of time is above all to gather in an afternoon the staff of Match with their friends and important players in this business present in Perpignan. Those behind the lenses of course, but also those behind the desks.

It is a place of professional relaxation where one forgets everything, and where we find ourselves a bit contemplative on this magic beach and isolated with the background (blue) of the Mediterranean.

What is especially fabulous is that the unique atmosphere that emanates from this improbable cottage is none other than the expression of this wonderful fraternity and camaraderie so special that exists in the people who do our job.

One can be fighting the other in the field, or even in newsrooms, but one never fires shots at a comrade, and one does not let anyone down. This is inappropriate. It’s innate to our profession.

On the contrary, we like to meet, to talk, to congratulate ourselves, to encourage each other because when it comes to friendship there is so much to spread around …

At the beginning, “Le Chiringuito” – the precise name of the restaurant at the beach of Torreilles – was the anchor point of the big “Match” family, as its director and creator of Visa, Roger Thérond, meant.

Far from Paris, from the pressure of the news and the deadline of a magazine finally so difficult to do, Roger liked to gather with “his boys” like a commander of Marines before the assault. Some kind of communion with his troops to give all courage.

Roger also insisted that the editorial staff and journalists rub shoulders with the people of the administration and advertising that he brought every year. They fought as much as we did for the paper, he said, but were more discreet.

Each year, the “boss” was accompanied by his wife and three daughters, as out of respect and friendship for those devoted and available men and women who surrounded him at the newspaper. This rather solemn meal brought everyone together in the middle of this wild landscape of dunes bathed in this unique autumn light reflected by the sea.

Roger found serenity, and tranquility, and felt good there.

This beach brought together all that he loved most in the world: his family, his region, his job and the Mediterranean he revered, and of which he had collected the first pictures of the 19th century.

Chris Laffaille, is one of the former directors of information of Paris Match, it was he who had found the restaurant where is held every year the lunch party of the magazine.