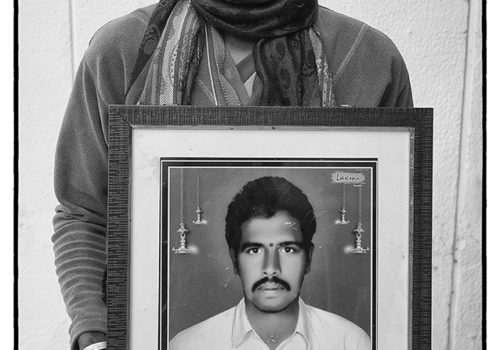 Produced by award winning photographer and filmmaker Vijay S. Jodha, the exhibition focuses on India’s on-going agrarian crisis in which 300,000 debt-stressed farmers have committed suicide since 1995. The photographic portrait project has been produced in collaboration with some of their family members, largely widows. Chennai Photo Biennale is India’s premier photography event. The 2019 edition features over 60 artists and art collectives with events and exhibitions in 20 venues over a monthlong period. The festival is curated by well-known artist N. Pushpamala.

THE FIRST WITNESSES project has been exhibited earlier as two solo shows and one group show to a good response from the public and the critics. India’s biggest newspaper The Times of India said, “The stark black-and-white portraits…are proof of the greatest despair of our country right now — agrarian crisis.” The Hindustan Times said, “The recent events make Jodha’s work even more relevant and necessary.” India’s leading green publication Down To Earth said that, “these works have attempted to change the narrative of the agrarian distress.”

India is the among the highest producers of almost every agricultural commodity in the world such as tea, coffee, rice, wheat, corn, beans, spices and milk. Although this indicates a robust farming sector, things have never been worse for many of India’s farmers. Due to financial distress, over 300,000 of them have committed suicide since 1995. The survivors, predominantly widows, are both victims and the first witnesses in this on-going tragedy.

This photography project is produced in collaboration with a few such witnesses. It puts faces to some of the grim facts with the intent of humanizing this on-going tragedy rather than keep it distant and abstract; especially in cities where all policies affecting farmers get framed. The large-sized presentation makes the people and the issue loom over the viewer. The image scale also subverts visual culture in India where such large hoardings are a monopoly of the famous and the powerful.

Accompanying almost every image here are names and relationship of the living with the departed, the size and location of their farmland, the quantum of unpaid loan on the day that farmer chose to end his life – details that restore some immediacy, individuality and a measure of dignity to the people appearing in the photo frame. In doing so, this project seeks to contribute towards ensuring that eventually no farmer is left without means or dignity. In that sense this project is driven by hope rather than despair.

Vijay S. Jodha is a writer, photographer and filmmaker based in Gurgaon, India. He studied filmmaking at New York University. He has produced five books and his projects have received over seventy honors in 24 countries including 17 best film/director awards. His films have been broadcast in over 200 countries on 75 channels including BBC, CNN and Discovery. Two of his books and three of his films have been selected for archiving in the U.S. Library of Congress. Parallel to paid work, he has produced over 30 films on pro bono basis, and has helped raise over 16 million rupees for various grassroots organizations.