Versailles : Willy Ronis in the GDR, Life above all 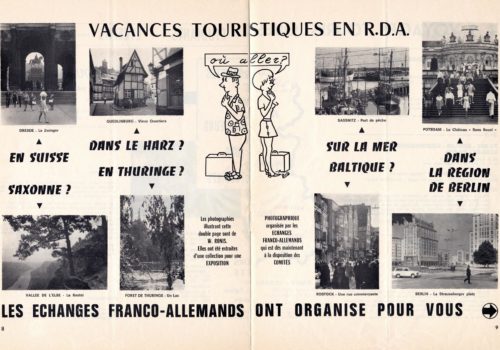 When we love, we do not count, as the saying goes. It’s true that we loved Willy Ronis’s catalog of his images from the GDR. So, as the Versailles exhibition has just opened: here are some new images!

The announcement of the exhibition Willy Ronis in the GDR, Life above all completes that of the book posted on May 5, 2021 on The Eye of Photography.

Presented in Versailles, the exhibition Willy Ronis in the GDR, Life above all highlights a little-known report by Willy Ronis (1910-2009), produced in 1967 in the German Democratic Republic at the request of the cultural association Échanges franco- German (EFA). Communist sympathizer, the subject interests him. Willy Ronis was 57 years old and his eyes were fully mature. After two trips, in summer and then one in autumn, and 4,300 km driven, he brought back more than 2,500 images and the material to design the 160-print exhibition commissioned by the EFA.

The country is almost twenty years old and was still not recognized by France at the time. The ambitioned exhibition must circulate and make the French discover this other Germany … and, in its margin, collect petitions. The objective is the presentation not of the regime but of the country: its heritage and its landscapes, the strength of its industry, the reconstruction of cities still marked by war, the education system, workers in cooperatives, the wealth of the cultural world, and this full and joyful life that he perceived – one cannot believe that it is the one presented to him. Such a tone can surprise – and seduce – even if we know the reality of this democratic Republic. Basically apolitical, the reportage that he produced is by no means a flattering portrait of a dictatorship. Willy Ronis is the witness of a balanced society; the images published by the EFA invite the French to go on a trip.

Ronis is committed to the cause of “the progress of socialism”. His political opinions led him to accept commissions and conferences in the countries of the Eastern bloc: Warsaw in 1950, East Berlin in 1960, Prague in 1966 and Moscow in 1968. The GDR in 1967 is his major reportage. abroad ; he is one of the few western photographers authorized to travel the country. Because it was not exhibited in Paris – few official places then exhibited the photograph and the events in Prague in 1968 did not encourage them to do so – Willy Ronis remembered it as a failure. It was not so: the association EFA presented it in more than 80 cities between 1968 and 1974 and it fully played its role of discovery, political and militant.

Today the GDR has been reunited with West Germany for over thirty years. The new exhibition presented at the Espace Richaud is intended to be a link with Germany, yesterday and today: the City of Versailles, twinned with Potsdam, aims to present it there; the bilingual catalog is published in France by Parenthèses and in Germany by Wasmuth & Zohlen. The exhibition re-examines this forgotten work by Willy Ronis, the context of travel and the Commission approached through numerous archives and vintage prints. 120 modern prints – including 7 in color – develop Willy Ronis’ unique outlook on this vanished country. Whatever the context or the time, his style is above all about humanism, the sensitive desire to photograph men and what connects them, a certain idea of ​​brotherhood.