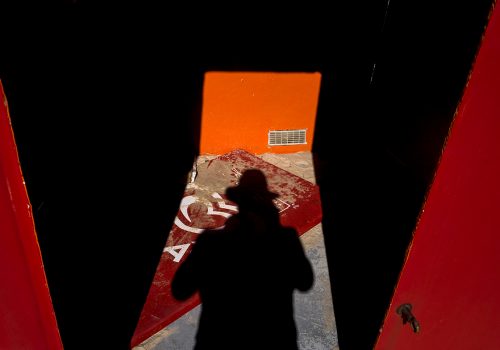 For about 3 years (2016-2019) Vasco Trancoso photographed the town of Caldas da Rainha and Óbidos almost daily – in public places (streets, beaches, museums, etc.). Book “99” is the final step of this work featuring a selection of 99 photographs.

The work have the contribution of two internationally renowned photographers:David Gibson (co-founder, in 2000, of the In-Public collective – 1st Street Photography blog – and author of several books on photography – of renowned prestige) who wrote the Essay at the end of the book and by Paulo Abrantes – Portuguese photographer appreciated and distinguished on worldwide platforms where he has been awarded and where he works as a Curator – who wrote the Afterword.

Born in Lisbon but since 1983 Vasco Trancoso lives in the city of Caldas da Rainha – Portugal. A gastroenterologist who, after retirement, resumed an old passion: Photography. After a first moment with contemplative images of landscapes he decided, at the end of 2014, to begin making photography in public places. A deliberate and decisive moment. An intentional and planned choice, a new way of life.

Fascinated by the unpredictability he follows an almost daily routine where he photographs only for his own pleasure. A healthy and life-saving obsession that leads him to discover daily miracles that appear as fragments of a parallel dimension. During 2015/2016, his photographic “voice” has changed and his work has been “in colors”.

Since then, he has been fascinated to discover the magic of light in the urban kaleidoscope mainly when fragments of colors emerge between dark silhouettes and deep shadows. A way of seeing through the primacy of aesthetic choices, geometries and the elaboration of contrasts. The plastic approach, the chromatic composition, the emotions and the graphic impact are decisive.

So, the photographs that appear in this book were made, as a Project, mainly – in his hometown – in the city of Caldas da Rainha (about 30 thousand inhabitants), on the streets of the castle of Óbidos and on the beach of Foz do Arelho – both about 7 km away from Caldas. It is the first time that this region has been photographed in this way.

Out of 99 images, only 5 were made in Lisbon and 1 in Quarteira (in the south of Portugal), which may eventually make the transition to a future project on other places.

But shooting on the streets of a small town is a real challenge. Extraordinary situations are rarer than in large cities.

Caldas da Rainha and Óbidos do not escape the rule. We find people only in the urban center (some squares and just over a dozen streets), an open-air market and a beautiful park. There are also churches, monuments, the beach, the largest lagoon in the country and the castle.

The city does not have saturated colors walls like Cuba or Morocco and people dressing conventionally make it difficult to find fantastic personages like in London or New York.

Therefore it necessitated a constant observation of the places, the colors and the adequate light at the right time – walking dozens of times to the same places and the same hours hoping to find the right actors for the right scene as well.

The decision to edit this book is also a consequence of the notion that photographs only reach their final stage when printed – felt with our hands in the texture of the paper – and not only appreciated in an ephemeral way through backlit screens. The books encourage a slower and more concentrated engagement of the viewer.

Those interested can order the book via email: vasco.trancoso@gmail.com