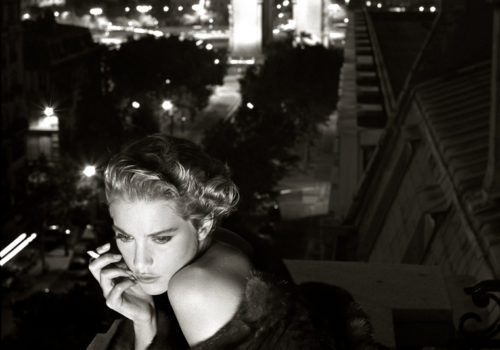 UFO (Unified Fashion Objectives) is a 40-year retrospective book of Albert Watson’s best work for designers like Chanel or Prada. It contains portraits of rock stars, actors and other celebrities, including his iconic image of Kate Moss. Watson has photographed over 100 covers of Vogue magazine, Vibe, Rolling Stone and Interview.

Albert Watson has made his mark as one of the world¹s most successful fashion and commercial photographers during the last four decades, while creating his own art along the way. Over the years, his striking images have appeared on more than 100 covers of Vogue around the world and been featured in countless other publications, from Rolling Stone to Time to Vibe. Many of the photographs are iconic portraits of rock stars, rappers, actors and other celebrities. (Albert Watson was the official Royal Photographer for Prince Andrew’s wedding to Sarah Ferguson).

He also has created the photography for hundreds of successful ad campaigns for major companies, such as Prada, the Gap, IBM, Levi¹s, Revlon and Chanel, and he has directed more than 200 TV commercials and shot dozens of posters for major Hollywood movies. All the while, Albert Watson has spent much of his time working on personal projects, creating stunning images from his travels and interests, from Marrakech to Las Vegas to the Orkneys. Much of this work, along with his well-known portraits and fashion photographs, has been featured in museum and gallery shows worldwide. The photo industry bible, Photo District News, named him one of the 20 most influential photographers of all time.

Born and raised in Edinburgh, Scotland, Albert Watson studied graphic design at the Duncan of Jordanstone College of Art and Design in Dundee, and film and television at the Royal College of Art in London. Though blind in one eye since birth, he studied photography as part of his curriculum. In 1970, he moved to the United States with his wife, Elizabeth, who got a job as an elementary school teacher in Los Angeles, where Albert Watson began shooting photos, mostly as a hobby.

Later that year, he was introduced to an art director at Max Factor, who offered him his first test session, from which the company bought two shots. Albert Watsons distinctive style eventually caught the attention of American and European fashion magazines such as Mademoiselle, GQ and Harper’s Bazaar, and he began commuting between Los Angeles and New York. In 1975, he won a Grammy Award for the photography on the cover of the Mason Profitt album Come and Gone,² and in 1976, he landed his first job for Vogue. With his move to New York that same year, his career took off.

Albert Watson has always been a workaholic. The archives at his studio in Manhattan are filled with tens of thousands of images and negatives, on which world-famous magazines and companies can be read. His studio, also used as a personal gallery, is filled with extraordinarily large-format photographs taken in Las Vegas.

UFO: 408 pages with 364 color and black-and-white photographs and foreword by photo historian and curator Gail Buckland and Albert Watson. The book is published by PQ Blackwell. In hardcover with an acetate slipcase for $135.00.

A second book by Albert Watson is going to be published. “Strip Search”, five years in the making, is Watson’s spectacular personal portrait of Las Vegas as seen through the lens of a legendary photographic artist.

UFO and Strip Search can be bought in Paris at :