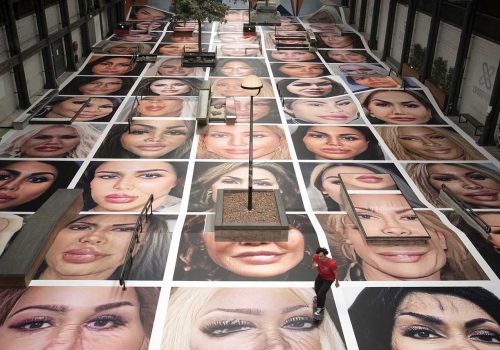 Yesterday we mentioned that BredaPhoto offered 54 projects – but in a matter of fact one project was scrapped within a week from it’s opening. What happened?

From the start BredaPhoto profiled itself as a critical & ethical arts festival: each edition reflects the issues that confronts us. The lure of technology was translated in ‘To Infinity and Beyond’ (2018), self-centeredness in ‘You’ (2016), authenticity & new romanticism in ‘Song from the Heart’ (2014), opposed to the Homo Economicus they proposed the ‘Homo empathicus’ (2012), the economic turmoil was analyzed in ‘Tilt’ (2010) and ‘Heimat Hotel’ (2008) confronted our views on ‘the other’ and migration.

Erik Kessels (1966) is a Dutch professional active in advertising & communication, but also a collector and publisher of found images, artist & curator. Perhaps you would remember his installation “24hrs in pictures”, a space filled mountain of images, referring to the 1 million images that were uploaded every 24 hours in 2011 on Flickr, Facebook & Google. (Should we say that some sources cautiously estimate the number of shared images today at about 1.8 billion per day every day), Censored where he showed two projects on censorship (Small change and No more teenage Lust) or finally the installation in UNSEEN 2017 of a bouncy castle where adults were invited to jump up & down a face with orange complexion.

For BredaPhoto 2020, Erik Kessels starts from the conclusion that we are no longer satisfied with our appearance at all (sometimes from a very tender age) or that we cannot accept our physical decline.. He took 800 images (men and women) who underwent plastic surgery, and using an algorithm, he generated 60 faces in 4x4m images and glued them to the floor of a skate hall. Each of the images showed the madness of plastic surgery, the interaction of the skaters with the floor covering eventually started to wear away the avatars.

But one day after the opening, an anonymous petition titled ‘We are not a Playground’ appears online questioning the work of art. The text (deliberately?) drafted in English was quickly picked up by international digital media. There the content was quickly reduced to a caricature: it read “artist calls to destroy women’s faces”, the artist was dismissed as “white misogynic male”. Thanks to this distortion, the protest is swelling by the support of e.g. female skaters in the US…

The Skatepark fears losing their international financial support, apologizes and decides to remove the work of Kessels. BredaPhoto repeatedly asks in vain to enter into a public debate, but the anonymous pressure group retorts that they don’t condone to “unpaid labour in an organization where internal relations are distorted”. This latter telltale passage is now deleted from the pamphlet, a clear case of self-censorship.

A determined Erik Kessels states that his work has a social message & he apologizes to people he may have hurt unintentionally. But he unambiguously still supports his work of art, affirming “it may be removed, but my creativity is unaffected”.

You have to admit that most images seem feminine, because of the greater number of women who undergo surgery – but they remain avatars. Ultimately, the bottom line is not the work itself, but the consequences of the social action. It should make us think about freedom of speech, the power of social media, the increasing threat of (self) censorship, and the impact of cancel culture that reached culture. BredaPhoto is an important (photo) festival and an anonymous coalition of “artists, photographers, designers & creatives” not only succeeded in causing an upheaval but forces BredaPhoto to amputate an installation.

The freedom of the artist and the right of initiative of festivals are seriously threatened. Art should rub you up the wrong way. Perhaps one should remind the petitionists of Voltaire: ‘Je ne suis pas d’accord avec ce que vous dites, you mais me battrai jusqu’à la mort pour que vous ayez le droit de le dire’ – ‘I disagree with what you say, but I will fight to the death so that you have the right to say it ‘

This is certainly an important matter, but we must not forget that the festival offers 53 more interesting projects – about those you can find out everything in the 5 following contributions in the next few days.