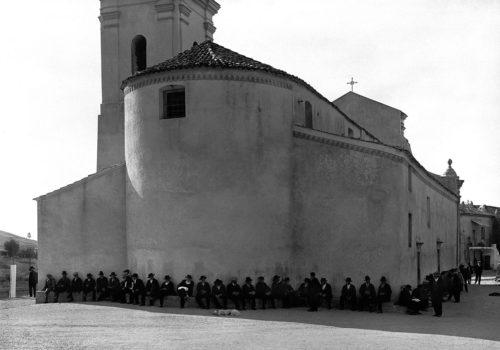 A peaceful and sharp look at Corsica

Men in black sitting on the wall of the church of Piana; at the edge of the shadow, a white dog asleep at their feet. Vision could not be more normal for the island inhabitant. Except for the photographer who witnessed the scene! This photograph is surely the best known of the reportage that André Kertész made in Corsica in 1933 for the magazine Art et Médecine.

He landed on the island in May, and followed a route that starts from Ajaccio, goes up the west coast towards Piana, Porto, Calvi, Ile-Rousse, passes through Corte to reach Porto-Vecchio, Sartene and Bonifacio by an inland road to then return to the continent via Ajaccio.

This is the first time that André Kertész has come to Corsica (a few years before the Hungarian photographer Emeric Feher). Despite a short stay to which must be added the difficulties of travel on the island at that time, André Kertész benefited from contacts on the spot – according to his photo book – which helped him to organize his reportage (as is still done today in this field). Equipped with several black and white film photographic formats films, sometimes traveling by car, sometimes in coaches from the PLM company on roads that were not always very passable, André Kertész photographed Corsica between the wars: a rather rural island still very remote from a certain continental modernity. The reportage he produced was rich in landscapes, scenes of daily life and human activities but included few posed portraits like the one done in Bonifacio on the terrace of a café.

When the issue of the magazine appeared in December 1933, 13 photographs were published while the reportage had more than a hundred. This type of commission gave him the opportunity to reconnect with landscape photography. For the most part unpublished, the photographs we have chosen here reveal a series far removed from any touristic vision and inform us about the aesthetic and documentary approach that André Kertész had on the world around him.

While at this time the famous Corsican photographer and art publisher Ange Tomasi draws up a formidable photographic inventory of Corsica – nothing escaped him and there were few villages he did not know -, for his part André Kertész adopts, during his short stay, a fair distance from the characters and situations he encountered, a discreet witness of the scene: Ajaccio notables in the middle of a conversation on the Place des Palmiers, a saleswoman dressed in black on a market, or even playing  boules at Ile-Rousse… The photographer’s point of view then becomes that of the spectator. It’s about seeing without being intrusive. The foregrounds in the landscapes soften the frontality that emerges and exalt the depth of field, allowing the eye to take the time to see and scrutinize the smallest detail; the picture of the oratory on the route des Sanguinaires, among other images in the series, is a particularly interesting example. In addition, when he photographs Bonaparte’s birthplace in Ajaccio, he plays on the photographic effect of the bird’s eye view as for certain views of Paris. The composition of his images invites the viewer to discover and travel. The foregrounds with figures in the shadows often install a peaceful atmosphere which also gives a notion of scale specific to 19th century landscape photography. But not only because when André Kertész photographs a sea cave in Bonifacio, there emerges a spirit of adventure specific to the extraordinary travel stories of Jules Verne. However, the Corsican roads of this period hold many surprises in store: André Kertész encountered there that challenged him, such as the woman on the back of a donkey with her parasol, the haughty and proud mouflon, the shepherd and his herd or even the man escorted by two gendarmes on horseback, which adds a romantic side to the series. And then there are more comical aspects illustrated by the coach stuck on the road because of a rockslide (which still sometimes happens today in mountain villages).

Here, the Mediterranean light floods the landscape to sometimes sublimate it in the Gulf of Porto or the Sanguinaires Islands with a contrast that the black and white magnifies. The granite landscapes, which seem to preserve a secret for the initiated, rub shoulders with the human and pastoral activity of Corsica in the thirties. Always at a good distance, neither too close nor too far, André Kertész knows how to be discreet and present us with beautiful encounters, especially in Piana with these three men smiling mischievously sitting on the low wall of the church of Santa Maria Assunta.

Thus, the scenes of daily life follow each other and punctuate the whole reportage with tenderness, alternating with landscapes: fishermen repairing their nets, children playing in the streets, procession of fellows, peasants on horseback, or even this discreet woman leaning on the corner of a building in Sartène, seeming to wait for the photographer while observing his gestures.

Thus, as his Corsican wanderings progressed, André Kertész realized with his sharp gaze, a reportage on a time in Corsica now gone that we are pleased to discover in this book.

Director of the Mediterranean Center of Photography

1 Emeric Féher (Hungary 1904 – France 1966) photographed Corsica in 1935 and 1939 on a tourist trip and in 1965 for an commission on tourism. He collaborated with journals and pharmaceutical industries. The Museu di a Corsica in Corti devoted an exhibition to him in 1995.

An exhibition pays tribute to him:
from February 15 to March 22, 2023 at the Bastia Museum
Place du donjon La Citadelle 20200 Bastia.
https://musee.bastia.corsica/infos-pratiques/