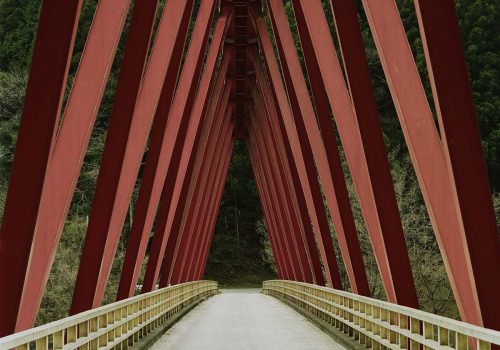 Laurence Miller Gallery presents Toshio Shibata: Five Decades, the first American retrospective of this prolific Japanese artist, globally recognized for his photographs of infrastructure within the landscape. The show will encompass his student work in painting and printmaking from the early 1970’s; his first forays into photography, exploring isolated structures at night; his pivot into highly abstract black and white photographs of the man-altered landscape; and his transition into color photography, which he continues to pursue to this day. His early student work and recent landscape work have never before been exhibited in the U.S.

Shibata’s earliest influences are apparent in his student work, especially Jasper Johns’ Map paintings. His early photographs, taken at night in the mid-1980’s, echo the dispassionate point of view articulated by the New Topographic photographers exploring the American West. By 1990, Shibata had found his true subject – the natural landscape, whose contours and boundaries were re-shaped by man. Reflecting Japanese values, where man functions in harmony with nature, he used a strong sense of abstraction to capture the flow of water over a dam and the rhythms of concrete placed throughout hillsides to prevent erosion or collapse. Commissioned by the Museum of Contemporary Art in Chicago in 1996, Shibata travelled across the U.S., and made some of his most powerful works at the Grand Coulee Dam in Douglas County, Washington.

Since 2006, his landscape work has been exclusively in color. It highlights his acute eye for abstraction, coupled with a palette of warm grays, soft greens and jolts of bright red. And it offers great diversity – the serenity of a string of buoys on the reflective surface of the water; the force of tumultuous waterfall; the bold and dynamic engineering of bridges and dams; or the abstract rendering of elements of the landscape. Perhaps the most iconic color image is Shibata’s 2007 photograph of a red bridge in Okawa Village, Kochi Prefecture, Japan.

FIVE DECADES will be Laurence Miller Gallery’s ninth exhibition of Shibata’s photographs, including two-person shows with the painter Toeko Tatsuno and the photographer Yoko Ikeda. There will be a reception for the artist on Wednesday, June 12th, from 6 to 8pm.