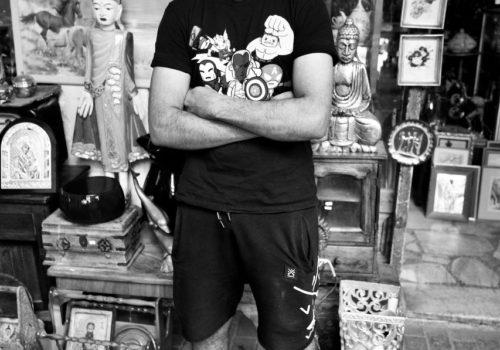 The project: two months on the streets every day, shooting full-length portraits ‘in situ’ of an unexpected Greece – foreigners who’ve migrated here, coping with relocation and a strange language, sending their kids to Greek schools; along with Greeks who don’t conform to traditional visions of what the society should be.

The focus is on younger Athenians transforming the capital – beyond the financial crisis, Covid, and flood of refugees. The change is dramatic: a spirit of rejuvenation is lifting rundown areas out of malaise with new bars full of grunge, neon and disregard for convention. And always the graffiti, often tongue-in-cheek: ‘Berlin is the new Athens…’

What makes a ‘new Athenian’ in 2022? In a word, diversity. In the backstreets you’ll see Indian and Middle Eastern stores, many started by refugees, while Chinese unbundle huge cartons of imported clothes – bound not only for Greece but all of Europe – and street vendors from Nigeria and Somalia and Pakistan and Sri Lanka sell everything from shoes to watermelons to kids’ balloons. You’ll hear them speaking not only Greek but Mandarin, Hindi, Tamil and Arabic. Humanity on full display. There’s always something if you keep your radar on…

Athens isn’t a pretty city. Sidewalks are broken, buildings are half-finished (the money ran out) or need total renovation, pedestrians and cars compete lethally. But it remains an amazing, sprawling metropolis of three-million, the classical past at every turn and side-streets filled with exotic flavours and new arrivals. People make a city, and Athens is alive with humanity. What more could a photographer ask for?

Now begins the task of editing the work – 150 portraits – down to exhibition/book dimensions, finding a publisher and a gallery. It’s been an illuminating journey, meeting people with so many backgrounds and stories to tell. To all who were happy to pose, and to Athens itself, my thanks. Ancient or this century, it’s still one of the great cities of the world…

Tony Maniaty is an award-winning Greek-Australian author and photojournalist based in Paris and Sydney. He has been the European Correspondent for Australia’s SBS Television, Executive Producer of the Australian Broadcasting Corporation’s ‘7.30’ current affairs program, and Associate Professor of Creative Practice at the University of Technology, Sydney.