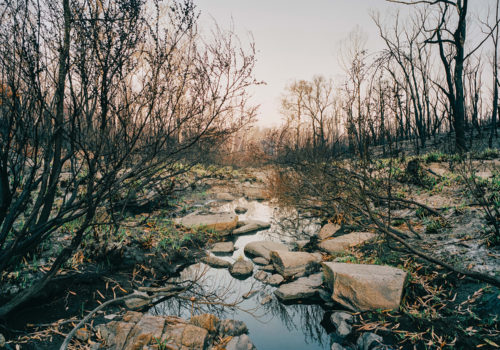 In the Australian summer of 2019/2020, vast swathes of the country were ravaged by bushfires. This island continent is no stranger to the perils of fire, but the ferocity of that summer was next level. The catastrophic impact of the fires on so many communities seemed to awaken the Australian public. For the first time there was widespread linking of the fires and climate change. For several weeks Australia became the face of the climate crisis, our federal government’s appalling lack of action laid bare for all to see. The topic dominated global and local news headlines before it was kicked to the kerb by a new threat. In no time the Coronavirus had pushed the climate crisis from the news agenda as the planet grappled with a disaster that, as it turned out, is also related to how humans interact with the natural world.

In 2021, as Australia assumes a ‘Covid-normal” existence having largely controlled the spread of the virus, attention is once again turning to what is, in this author’s eyes, the greatest threat to our existence, the climate crisis. Telling visual stories of climate change is challenging, a balancing act between engaging audiences and boring them with stereotypical images. As various academics have noted, the mainstream media in general relies on well-worn tropes to depict climate change: melting ice caps, starving polar bears, drought-ravaged landscapes and smokestacks are a few of the media’s go-to images.

Challenging stereotypical norms has long been the province of art. Australian photographer Tom Goldner’s new book, Do Brumbies Dream in Red? offers a different way of approaching the climate change discussion. The title itself is a proposition. “I feel strongly that we need to come at the environmental conversation from a different perspective,” says Goldner. “Horses only see in blue and green. Asking if they see in red is an invitation to think about climate change in new ways.”

The project that became Do Brumbies Dream in Red? began as an exploration into the environmental impact of coal mining. Spurred on by the national protests against the Adani Carmichael super-mine, in August 2019 Goldner and videographer Angus Scott travelled thousands of kilometres from Melbourne to central Queensland. Internationally renowned as the home to the Great Barrier Reef, one of the natural wonders of the world, Queensland is also a major producer of coal. The Adani super-mine posed a new threat that would obliterate Indigenous lands, pollute waterways, threaten the Great Barrier Reef and contribute 4.6 billion tonnes of carbon into the atmosphere over its 60-year lifespan. In short, if this mine goes ahead it will be a monumental disaster for us all.

Goldner and Scott worked around the region threatened by the Adani venture with the aim of creating a visual language that would capture the sustained impact of coal mining on the environment. Goldner photographed massive trucks hauling coal and waterways that had been polluted by mining.

As he worked, Goldner began thinking about how what he was seeing and documenting related more broadly to the way humans interact with the natural world. The relationship between humans and nature became central to Goldner’s investigation. He returned to Melbourne with a collection of photographs which he felt told part of a much bigger story. As he pondered what might be the next step for the project, the country literally caught fire.

“I began to think about how the bushfires related to the environmental project I was doing in Queensland,” says Goldner. As the correlation between the fires and climate change became central to media and public debates, Goldner’s next step was decided.

In early 2020, and again later in June, Goldner and Scott travelled into the high country of New South Wales. There they planned to document the impact of two enormous wildfires that had decimated vast tracts of the majestic Kosciuszko National Park, destroying eco-systems, wildlife, heritage sites, farms and homes. It was devastation on an epic scale, the ravages on the landscape profound.

Kosciuszko is written into Australia’s colonial folklore. The 1890 poem by Banjo Patterson, The Man from Snowy River, presented the Alpine high country as a place of legends, a land inhabited by intrepid settlers who brought with them horses to traverse the steep mountain terrain, and cattle to feed on lush pastures. It is a romanticised landscape of rolling green hills and misty mornings where wild horses roam…and that’s where the fantasy collides with reality. These wild horses, the Brumbies, are not wild. They were introduced by settlers. These are feral creatures that cause untold environmental damage as they decimate grasslands and waterways and threaten native species.

On the first day in the high country Goldner came across a dead Brumby mare. Lying on its side in a landscape traumatised by fire, its belly bloated, its mouth drawn taught across protruding teeth in a macabre grin of death, the animal fascinated Goldner.

“I shot a roll of film on this Brumby. Later that day we found the mare’s mob on a flat plain and I photographed these horses also. The light that summer had this crazy red orange glow because of the fires and the sight of these horses in that landscape felt surreal.”

At the time Goldner says he wasn’t sure why photographing these wild horses seemed so important to him. “Brumbies were not even on my radar.” Yet they became pivotal to how he would tell his story of our relationship with the natural world.

In the Brumbies, Goldner saw the lasting legacy that human actions can have. Those who brought these horses to Australia would not have thought about their impact on the land, that one day they would become a feral pest, multiply in the thousands and come to threaten the environment.

What to do about these horses is a contentious issue in Australia. Some want to see them culled, which sparks protests of cruelty to animals or cries to save our cultural heritage. Brumbies are also a drawcard for visitors to the high country.

Goldner says the arguments over these horses that were introduced to Australia and have become both a problem and a national icon, are representative of the “inability for humans to take meaningful action on climate change because there are so many vested interests. This is a very human problem. These horses are not native, and if culling is the best thing for the environment, and we can’t learn a lesson from this because we are unable to separate ourselves from the symbolism of the Brumbies, then that’s a double tragedy.”

It would be incorrect to presume given the title that this is a book about Brumbies. Rather, these wild horses are an entry point to a complex narrative. Through Goldner’s pictures of fire ravaged landscapes, of homes now charred and twisted, the metal sheets piled high like autumn leaves, and in the hope that signs of renewal bring Do Brumbies Dream in Red? weaves history, myth, economics and politics to ask: what might we do differently? How might we see in new ways? What do we want for the future?

Goldner invites us “to lean into the ambiguity” of his pictures and engage beyond a superficial reading. He hopes that viewers will suspend judgement and allow the photographs to reveal their stories; an act that requires the same careful contemplation which informed their creation.

“I think of these photographs as being a reflection of ourselves, of showing us the world we have created, a view that is usually on the periphery,” says Goldner. “We put a human value on everything and that’s why we are in the situation we are with climate change. We need to rethink the way we relate to nature if things are going to be different. I know it is a big ask, but my hope for this work is that it will start new conversations.”

It seems fitting to end this article with a quote from Timothy Morton author of Dark Ecology, a book that inspired Goldner while he was creating this work: “If we want thought different from the present – if we want to change the present – then thought must be aware of this kind of future…Art is thought from the future.”

Do Brumbies Dream in Red?