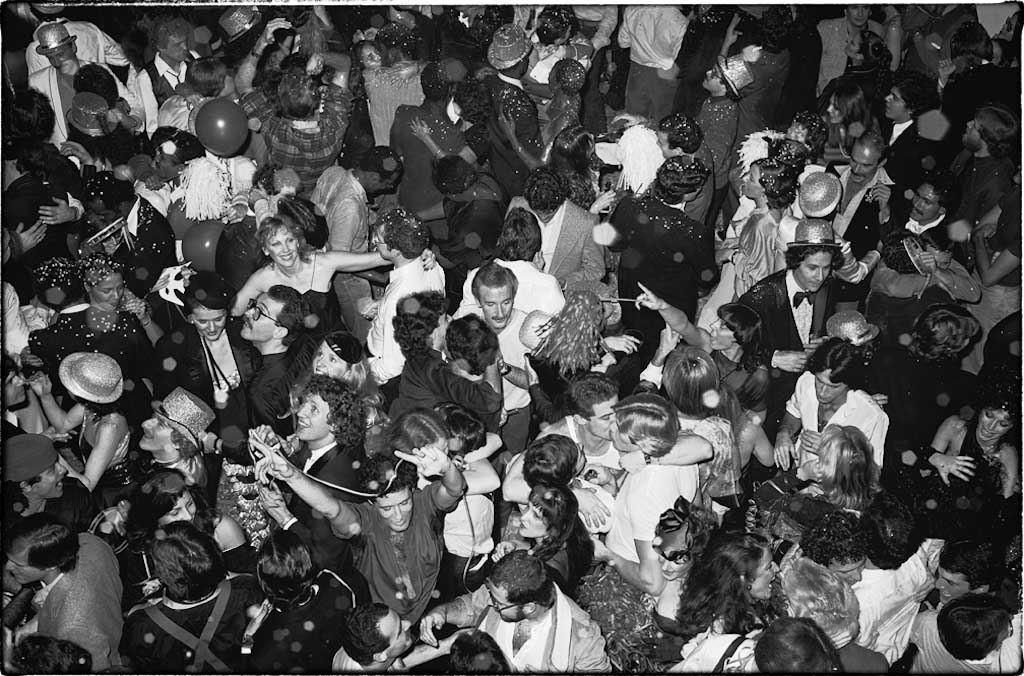 This month, Galerie Thomas Zander presents its first exhibition of works by Tod Papageorge. On view is a series of seventy black and white photographs from the legendary New York nightclub Studio 54 that was frequented by the likes of Andy Warhol, Liza Minnelli, Mick Jagger and Grace Jones. “Papageorge always had his camera at hand and between 1978 and 1980 he celebrated with the rich and beautiful, the artists and starlets; even today viewers can witness the eccentric and hedonistic party nights in his photographs. They revive the feeling of the disco era and express a profoundly urban spirit of directness, which condensed in New York at that time.”

Tod Papageorge (b. 1940) is an American photographer whose career began in the New York City street photography movement of the 1960s. He started taking photographs in 1962 as an English literature major at the University of New Hampshire. He is the recipient of two Guggenheim fellowships and two NEA Visual Artists Fellowships. Papageorge is also known by many as Garry Winogrand’s intimate friend, protégé, and sometime editor, writing of his early years with Winogrand in the SFMOMA 2013 exhibition catalog. He curated Winogrand’s 1977 exhibition “Public Relations” at the Museum of Modern Art. His own photographs have been exhibited and published widely, including “Passing Through Eden” (Steidl, 2007), “American Sports, 1970: Or How We Spent the War in Vietnam” (Aperture, 2007), “OPERA Città” (Punctum Editions, Rome 2010) and “Core Curriculum: Writings on Photography” (Aperture, 2011). Recently retired as The Walker Evans Professor of Photography and Director of Graduate Studies in Photography at the Yale School of Art after 30 years, Papageorge’s students have included Philip-Lorca diCorcia, Gregory Crewdson, and Anna Gaskell.

To my great fortune Tod Papageorge was my first formal instructor in Photography, opening up the worlds of Walker Evans, Robert Frank, Kertész, Brassaï, Atget and Cartier-Bresson, the merits of black and white photography, the mysteries of developing and printing and a passion for street shooting. I spoke with him about where he’s been and where he’s headed.

Elizabeth Avedon: What age were you first interested in Photography?

Tod Papageorge: I was 21, and for some reason decided I wanted to take a basic photography class during my last semester as an English major at the University of New Hampshire. It turned out that I loved it, just as I loved music—I played drums in a jazz group and tympani in the school orchestra—and also loved poetry, which I was fitfully trying to write at the time. So photography became another nearly-passionate interest I had then—until I ran across a photograph of Cartier-Bresson’s in an art magazine. It was of a boy in a smock reaching up against a battered wall somewhere in Spain, an ecstatic dreamer created out of the moment the photographer had caught him in. I was knocked out by it, my passion now fully engaged, and then and there decided I was going to be a photographer. At the end of that semester, I won the poetry prize that the English department awarded to an undergraduate writer, and, with my $15 of prize money, went to the school bookstore and ordered an out-of-print copy of “The Decisive Moment.” It cost $12.50.

EA: What took you into the world of Studio 54?

TP: This was in the late 70s, when I was living with a woman who had access to Studio 54. She was a celebrity photographer, and knew the owners of the club and so was able to get me in whenever I wanted. My memory, however, is that I didn’t go all that often: although I enjoyed photographing there, I was preoccupied with the work I was doing in Central Park at the time. Studio 54 was kind of an aside for me, exciting, yes, but not a subject I was desperate to visit and revisit.

EA: Your photographs capture the exact look and feel of 54s’ crowd. A mix of great looking wealthy Europeans, Upper-East-Siders, trust-fund kids, celebrities and a great deal of drugs. What was it like?

TP: I had started using a 6 x 9 cm. camera about that time, the format that Brassai had employed with such great success in the 1930s. It was a big machine, especially compared to the Leica’s I had been using for a decade and a half by then, and was made even heavier by the flash I had to add to it. And it only allowed eight exposures before the film had to be changed. All by way of saying that, while I sensed the swelling, pulsating world of Studio 54 roiling about me–and being everything from enchanting to brittle as it roiled–my reason for being there was to make pictures, a reason that, given the camera I was using as well as the dense, physical circumstances of the place, was difficult to do, at least with any degree of power or poetry. Given these limitations, the process required an almost-desperate level of concentration, at least as I had to practice it. No drugs allowed.

EA: Any question you would like to pose about this work?

TP: Yes: Why did it take 35 years for me to “find” these pictures and print them? Let me know if you have a possible answer.

TP: I’m looking forward to being a full-time photographer again, free of the language of instruction….