Third Biennial of the Photographers of the Arab World : Hassan Hajjaj 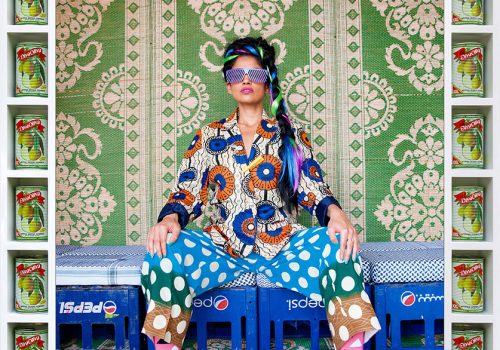 The MEP presents the first retrospective in France of the Anglo-Moroccan artist Hassan Hajjaj, giving him carte blanche to invest all of its spaces.

It underlines the main topics that lie at the heart of Hassan Hajjaj’s work: his interest in the world of fashion and clothing and its contradictions; his critical and uninhibited point of view on the consumer society; the questions of tradition and identity, including his unique view of the wearing of the veil, or even the daily lives of people he meets, friends or strangers crossed on the street in Morocco or elsewhere.

Born in 1961 in Larache, Morocco and a Londoner since 1973, Hassan Hajjaj has been living and working since then between the two countries. He is as much influenced by London’s cultural and musical scenes as by his North African heritage. His artistic universe thus reflects his ability to create bridges between these two cultures, making cross styles, universes and icons.

On the occasion of the exhibition, Hassan Hajjaj himself offers carte blanche to two Moroccan artists whom he successively invites to present their work in the Studio of the MEP: Zahrin Kahlo (11.09-13.10) and Lamia Naji (18.10 -17.11).

The educational spaces in the basement of the MEP also house a studio where visitors can take their picture in front of a wall of wallpaper, a symbolic and usual setting for Hassan Hajjaj’s shots. Finally, the new bookshop of the MEP presents a range of clothing and decorative objects made by the artist. Self-taught, Hassan Hajjaj does not freeze in any genre or form.

PARTNERS OF THE EXHIBITION

Partner of the MEP, the RATP accompanies the exhibition of Hassan Hajjaj by presenting an unprecedented project in a dozen stations of its network, from mid-September to mid-December 2019.

A book, published by RGB, accompanies the exhibition.

After the European House of Photography, the exhibition will be presented at Fotografiska in Stockholm, New York, Tallinn and London.