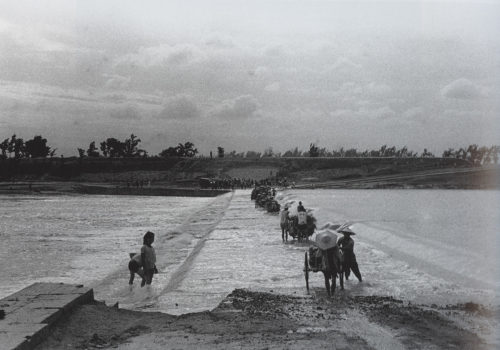 Three Western women discovered, looked at and photographed China at historic times through which the country and its capital, Beijing, passed – a country then cut off from the world. Three looks, three points of view and many constants in a time of profound upheaval. Daily life, the public space of the street resisting and ancestral gestures persisting. Some will find in the footsteps of the other a country with multiple appointments with History and which nevertheless goes about its business of the day.

On October 1, 1949, Mao Zedong proclaimed the establishment of the People’s Republic of China. Eva Siao, a German married to a Chinese close to Mao Zedong, documents the building of a new power and became attached to life as it went.

In 1957, Mao Zedong set up the Hundred Flowers Campaign to restore the authority of the Communist Party. Dominique Darbois takes advantage of a brief opening of the country to foreigners to criss-cross China’s cities and countryside in full reorganization.

In 1966, Mao Zedong launched the Cultural Revolution. The young Solange Brand works at the French Embassy in Beijing. She photographed in color and with complete freedom the daily life of a people carried away by the upheavals that take place in the tumults of History.

Photographer, Eva Sandberg left Germany in 1930 and joined her brother, a music conductor in Stockholm. In 1934, during a trip to the USSR, she met and then married the Chinese poet Emi Siao, a childhood friend of Mao Zedong. She settled in Moscow and took the Soviet nationality. In 1939, Emi was called by Mao Zedong, withdrawn in the caves of Yenan. She joined him in August 1940 with her son and gave birth to a second son. In 1943, she returned alone to the USSR with her children and settled in Kazhakstan where she survived thanks to her activity as a photographer.

In 1949, she learned of the presence in Moscow of her husband who was leading a Chinese delegation and left with him for Beijing. They frequented the first circle of power. She worked for the official Xinhua news agency while collaborating with the Soviet and East German news agencies. She also photographed the street and everyday life. After the Sino-Soviet split, she had to embrace  the Chinese nationality.

In 1967, during the Cultural Revolution, Eva Siao was arrested shortly after her husband. They will be released from prison seven years later. Rehabilitated in 1979, she resumed her work, exhibited in Stockholm, Germany and published her autobiography. She died in 2001 after bequeathing her work to the Ludwig Museum in Cologne.

At 16, Dominique Darbois joined the resistance in 1941. Jewish, she was interned in the Drancy camp from 1942 to 1944. At the Liberation, she joined the army, served in Indochina and Tonkin.

Back in Paris in 1946, Pierre Jahan introduced her to photography. After a trip to the Amazon, she published several books on Indian life. From 1952 to 1978, she traveled the world and devoted herself to the publication of a collection of 20 books “Children of the world” for which she produced images and texts.

His trip to China in 1957 shortly preceded the Great Leap Forward, a period of forced industrialization. She documented the work in regions undergoing transformation, but also daily life in the city, in the countryside and in a re-education camp.

During the Algerian war, one of her works was banned. In 1963, a member of the Jeanson network, sentenced to ten years in prison, she hid until the amnesty. From 1966 to 1969, she worked for the Algerian Ministry of Information and directed the photographic coverage of the first Pan-African Festival in Algiers.

From 1981 to 1986, she worked to expand women’s rights with Minister Yvette Roudy. In 2004, she published two books on African women and a final one on children as the ultimate salutation to life.

Fresh out of her Parisian high school, at the age of 19, Solange Brand joined a post at the French Embassy in Beijing in November 1965. She stayed there for three years. New to photography, but wanting to keep track of what she discoversed she acquired a Pentax camera in Hong Kong where she also obtained and had her rolls of Agfacolor slides processed. Color films were unavailable in China at the time, except for press and propaganda.

The Cultural Revolution broke out six months after her arrival. On foot, then with a light motorbike, Solange Brand roamed the boiling capital. She photographed the simple life of the Pekingese, the great demonstrations of the Red Guards and the solitary “long marches” stretching along the roads. She received permission to visit a few cities and then photographed where she wanted.

She returned to France in December 1968, put away her photographs, worked for the newspaper Le Monde in 1969, joining the editorial staff of the daily in 1971 and then that of Le Monde diplomatique in 1980.

The arrival of digital techniques opened up new perspectives. The transition from slides to the computer screen allows her to revisit her images and better share them. There followed various publications and exhibitions in France, China, Japan and various countries. (http://solange-brand.com)