The State Hermitage Museum : Beauty and Style. The History of Fashion Photography from the Collection of the Still Art Foundation 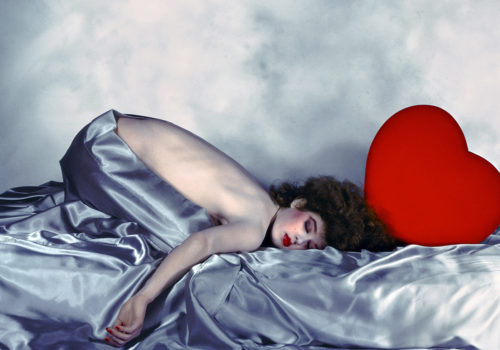 The State Hermitage Museum presents the exhibition “Beauty and Style. The History of Fashion Photography from the Collection of the Still Art Foundation” which opened last December 12th in the frame of the Hermitage Days, held each year in honor of Saint Catherine, the patron of the museum. The exhibition has been organized by the State Hermitage Museum in conjunction with the Still Art Foundation.

The display tells the story of fashion photography from the second half of the 20th century onwards and acquaints the viewer with the main motifs in the contemporary presentation of fashion through the example of works from the collection of the Still Art Foundation. The display features original prints from Erwin Blumenfeld, Horst P. Horst, Richard Avedon, Irving Penn, Helmut Newton and Guy Bourdin that have already become classics.

As Mikhail Borisovich Piotrovsky, General Director of the State Hermitage Museum observes: “The Hermitage concerns itself a lot with the history of costume (that is to say, fashion) and likes to hold photography exhibitions. Today those tendencies have come together with the aid of a splendid collection and a very meticulous selection of iconic images.”

“I am very grateful to the Hermitage for this collaboration which has provided the opportunity to show in my home city and in its main museum cult works from the collection of the Foundation (which today manages the largest archives in Russia of Western fashion photography of the 20th and 21st centuries). I am glad that the guests of the exhibition will see original works by acknowledged world-ranking photographers, and I hope that this exhibition project, which is important for the Foundation and for me personally, will arouse genuine interest in the museum’s visitors and give a fresh impulse to the study and evolution of fashion photography in Russia,” Yelena Nikolayevna Karisalova, the founder of the Still Life Foundation, commented.

“It was only quite recently that photography found its way inside museum walls. Perceived as ‘generally accessible art’, it seemed somehow less than serious, ephemeral. In the late 20th century, museums recognized its importance for culture and set about creating spaces for photographic collections. In the Hermitage there are some historical photographs that have come to be acknowledged as material in their own right within the span of our own experience. In recent years, the museum has held exhibitions of Cecil Beaton, Candida Höfer, Steve McCurry and the Henkin Brothers. Some of the pictures have come into the museum’s collection,” Dmitry Yuryevich Ozerkov, head of the State Hermitage’s Department of Contemporary Art, stresses.

In the late 20th and early 21st centuries, the fashion industry has reached a greater scale, and the phenomenon of fashion and the fashion image is undergoing a rapid ascent and becoming a topic for deep philosophical and cultural reflection. Contemporary fashion is work on other people’s desires, opinions, preconceptions and ambitions, while fashion photography is the laboratory within which that work takes place. Critics acknowledge that in the 20th century fashion and fashion photography became practically inseparable, forming a single common sphere: visually spectacular projects are developed across the spreads of glossy magazines, the grand fantasy of the ‘fashion world’ tempts and seduces us in the pages of the press, the formula for the fashion idiom gets refined in shoots and photo projects.

The earliest work featured in the exhibition is a classic original print from 1939 of the Mainbocher Corset by Horst P. Horst – a vivid symbol of Europe between the world wars. It becomes a sort of reference point marking the start of the history of the fashion industry: the war changed fashion fundamentally and spurred on the unification and standardization of this new industry. At the same time, as the globalization of the market and the development of the mass media advanced, high fashion increasingly came to apprehend itself as a realm of fantasy and ambition. Together with photography, it created desirable images in which the universal nature of the language combined with the inaccessibility of the dream.

In the 20th century, fashion photography on the one hand expanded into the realm of high art, while on the other gaining ground in the sphere of popular culture. The works that Erwin Blumenfeld and Irving Penn produced for the covers of Vogue in the 1950’s changed conceptions about the commercial function of the fashion shot: they appear to be not so much clothing advertisements in the manner customary at the time as works of art in their own right. Gradually, with increasing prosperity and the flow of capital into the industry, fashion shoots became grander and more expensive affairs, and the photographers’ flights of imagination ever more extravagant. The ambitions and thrust of fashion photography in that decade came to be symbolized by the series that Richard Avedon shot in exotic corners of the world. From the 1970s, fashion photography began to take on the gloomy, and at times oppositional, energy of subcultures – motifs of voyeurism and eroticism expressed themselves particularly vividly in pictures taken by Helmut Newton. By the late 1980s, the phenomenon of the “supermodel” emerged in mass culture: the heroines from magazine covers accumulated an immense stock of public recognition and were admired on a par with film stars. The 1989 photograph of five supermodels by Herb Ritts reflects the new status of models as celebrities. In the 1990s, young photographers countered the dogmatic idiom of the traditional glossies with naturalness, post- modernist humour, directness and boldness of intonation.

Today the fashion industry does not merely play with tendencies, producing attention-grabbing symbols, it is constantly rethinking its visual lexicon, ethical and aesthetic rules.

An illustrated catalogue has been produced for the exhibition with texts by Dmitry Ozerkov, Natalia Grigorieva-Litvinskaya, Daria Panayotti and Nathalie Herschdorfer.

The curator of the Still Art Foundation’s collection is Natalia Eduardovna Grigorieva- Litvinskaya, the founder of the Lumiere Gallery in Moscow.

Beauty and Style. The History of Fashion Photography from the Collection of the Still Art Foundation