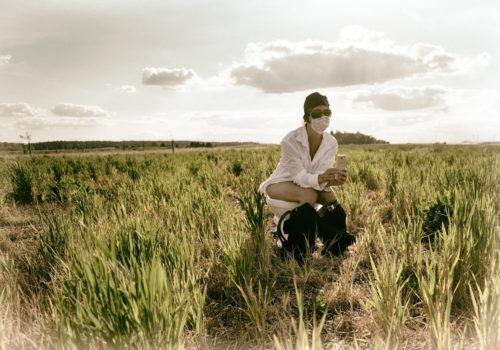 The world of Katia Gehrung captured with its different phases is made of humor and seriousness. Intelligence is always at the rendezvous in what would appear to be exercises in imbecility. And it is no coincidence that Venus comes out of the water or crashes in the middle of roads or fields and other places at her own risk. Nevertheless, onlookers run the same danger where the artist forges his own symbolism and his struggle. She is both all women and the swimmer of a single fight where the world only knows the feminine and her silent memories that the designer revives.

This quest remains a struggle. Narrations and their actors imprint the impulse where the self of the artist tracks another “me” it is for a germinative becoming within proposals which become insurrections. Katia Gehrung evokes the woman without making a sermon. And she multiplies the untimely appearances to bring out of the silence those who served as a rag or for the rest for the warrior. The feminine advances where the abyss of being turns into a house of myths and imprints as archaic as they are utopian. The artist dares a form of “incompossible”, the passage to consciousness and desire that smooths down to the hollow of the belly where the saliva of a plastic tongue returned to the mouth gets tired.

There is neither hatred nor bitterness in such stagings. Just the power of surreal poetry as an alternative to all the status quo. The feminine prints waves of which Katia Gehrung prolongs the waves and the foam far from any impressionist or expressionist character. The artist does not create “about” the women, it is they who seem to create the image even if the celebrant is indeed in charge. This is why the realistic representation – losing ground – advances towards what would be an enigma but can modify the lessons of history written so far by males, it is a way of reinventing the West.