The Selects Gallery : The Rhythm of Jacques Olivar 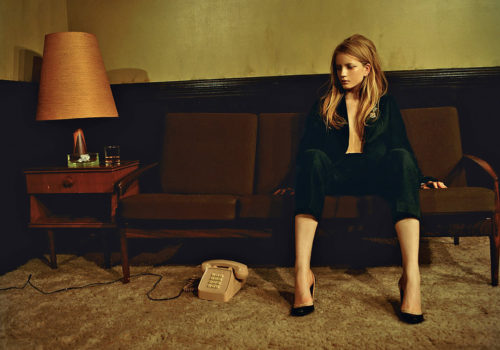 What do a junkyard, a gas station, a diner, and a black and white portrait have in common? They are each envisioned as a treasure by Jacques Olivar. The photographer has defined his career by imbuing his images with a rare energetic rhythm that has long been ascribed exclusively to filmmakers and musicians.

Born in Casablanca, Olivar trained as a pilot before earnestly beginning his photographic career. As he watched the world move beneath him from a plane soaring above, it seems he longed to make the world move in his images. After receiving First Prize from the Art Director’s Club and transitioning to Fashion Photography in 1987– which would land him on the pages of Vogue and Marie-Claire internationally, among others– Olivar has continued to inspire movement and rhythm within his images for decades.

Part of what makes Olivar’s images so palpable is his love of all forms of media and his ability to infuse that love within his work. A self-professed lover of Hitchcock films, one can easily see Janet Leigh, Grace Kelly, and Tippi Hedren in the spirit of his photographs, as many are centered upon a strong female lead. The models in Olivar’s works seem to look at you as if you were a Hitchcockian mystery that they have already solved– you follow their trail of clues and find resolution in their knowledge.

Olivar further summons iconic film tradition by placing many of his heroines in motion or on the run. Think back to Janet Leigh’s “Marion” in Psycho (1960), who spends the first third of the film anxiously traveling to her beloved after committing a crime. Or, picture Thelma and Louise, a film deeply ingrained within the ideals of womanhood, freedom, and Americana.

In Another Day in Paradise, Olivar captures Alexandra Tomlinson as she fixes the strap on her shoe, leaning ever so slightly against a car whose stark blue contrasts her red and purple dress. It is unclear whether she has just stepped out or is about to step in, creating movement both towards and away from the viewer and uncertainty and disorientation. Olivar noted that Tomlinson’s voice recalls “Janis Joplin, a drugstore truck driving man, and Tom Waits,” each a staple of Americana. These elements combined with the Hitchcock twist and drama create an image that exudes rhythm and movement from every angle. 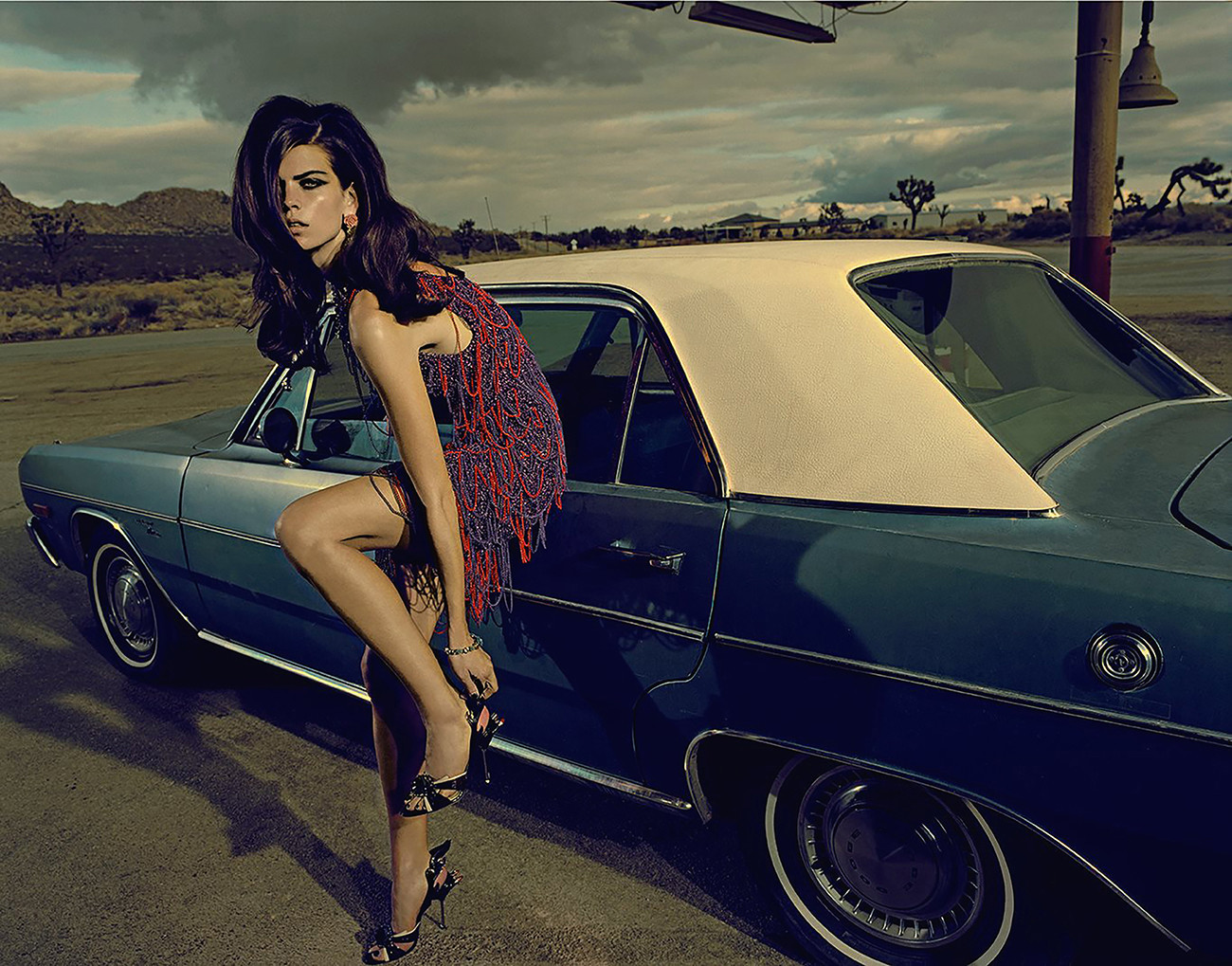 Jacques Olivar, Another Day in Paradise, (2015)

Even an image such as Fanny and the Motel Room– a black and white photo centered upon a young, languishing, and exhausted woman– is filled with movement despite its appearance of stillness. It implies a story: who is she waiting for? What has she done? What is she running away from? According to Olivar, “love sometimes flies away in those dusty motel rooms.” It appears as if we have caught the subject in a moment where she watches love drain from the room, just as Olivar has aptly drained the color from the image. Movement is suspended, but we, as viewers, feel that we are suspended along with it. Like Hitchcock, Olivar becomes a master of suspense. Just as we hold our breath before the main action in a film, we revel in this moment of stillness, waiting for what is to come. 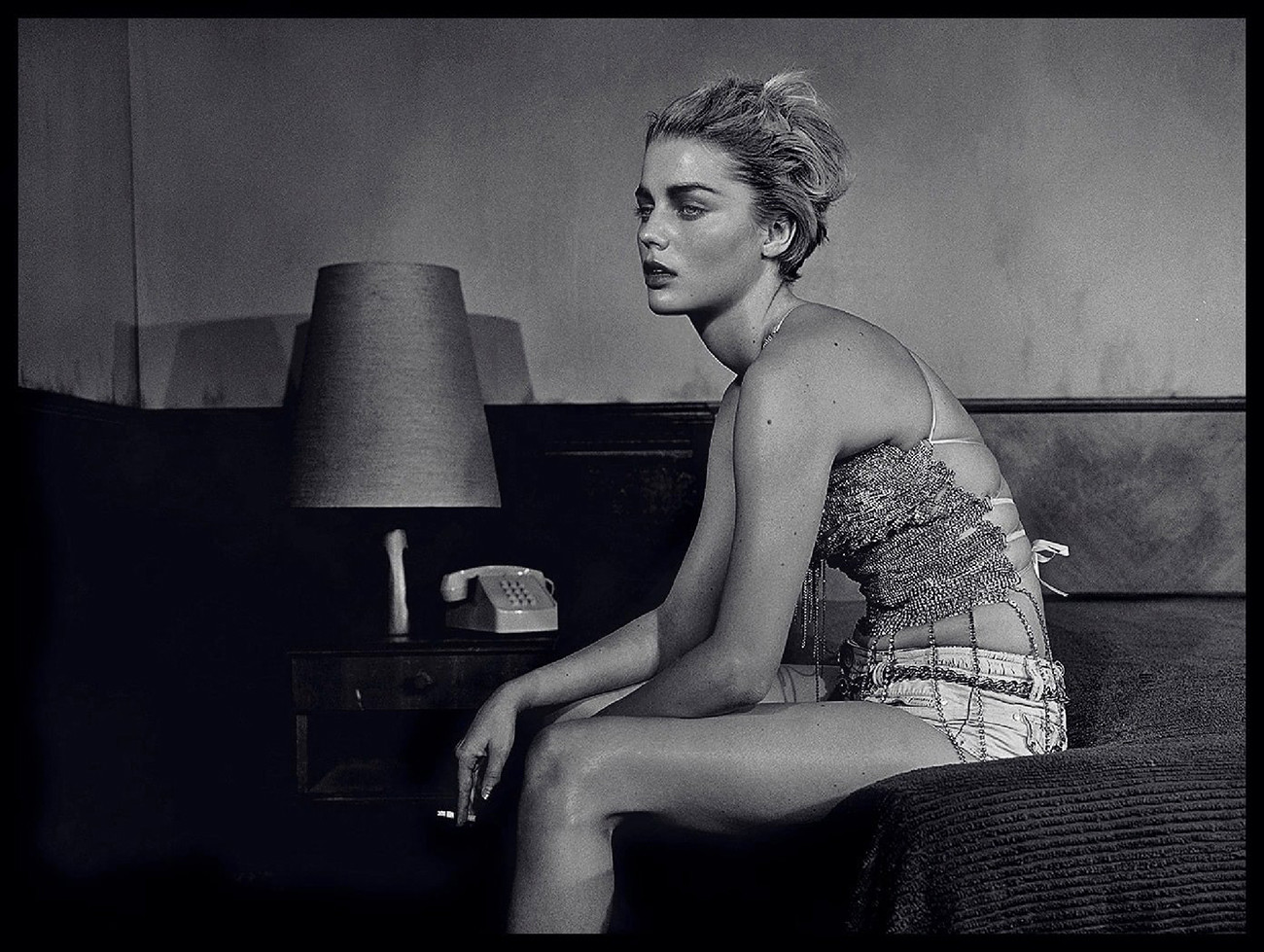 Even after being published, Olivar continues to apply his love of rhythm and movement to his photographs. Take, for instance, his website, where music plays as you scroll through his images. Before long, you forget that you have turned the music on at all; it seems as though the photos naturally produce the sound themselves. “Bye, Bye, Blackbird” plays softly and cascades through each image, uniting an estranged yet honest woman in a run-down diner to a reclined model in a glamorous blue Cadillac. Both images are loaded with symbolism and make music of their own, from the dusty desert plains of Nevada to the saturated seaside of the Balearic Islands. Olivar is a musician in his own right, mastering the guitar and several other instruments. Undoubtedly, his love of music is not relegated to his instruments, as his rhythm permeates into his images.

Like a dedicated director of a film, Olivar takes pains to acknowledge every individual involved in his photographic process, creating credits that underscore each image rather than fleetingly roll away on the big screen.

Jacques Olivar’s images enthrall, delight, and captivate by providing their very own soundtrack, backstory, and dialogue. As he continues to capture the spirit of transience and movement within his work, one cannot help but sway to the rhythm.