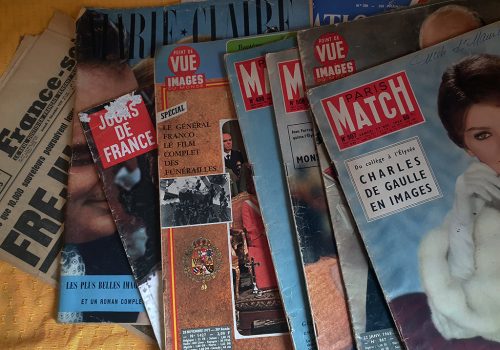 #5 – From Royal Courts to the Commercial Court

Lova de Vaysse was fluent in four languages, French, English, German, and Russian.When I heard  him say “Güten tag fräulein Paupitz” and I knew he was calling Stern magazine.

In Belgium our representative was Ben Vandoorne, a tall jovial fellow who frequently came to Paris. In Germany our correspondent in Stuttgart was the Pandis agency.

For large events or princely weddings we often moved a whole team on site. We rented a well-equipped lab. The photos were thus processed, edited and distributed throughout the event.

This was the case, on July 2, 1959, for the marriage of Prince Albert of Liège with Paola Ruffo di Calabria. The agency then worked in pool with the Dalmas agency and that of Raymond Darolle, Europress. The reportage was , edited and distributed from Belgium.

The agency had already covered, in October 1956, the betrothal of the Count of Clermont, Henri of Orleans, with Marie-Thérèse of Wurtemberg at the castle of Altshausen in Baden-Württemberg (Germany). Later in May 1962, the Associated Reporters also covered the marriage of Sophie of Greece with Juan Carlos of Spain in Athens… Princely events are always a recipe for success.

The fame of the agency was acquired in 1965. All the major events were covered and came from young photographers full of energy and eager to succeed and make a name for themselves in the photographic press.

We thus see a great Turk passing by, his name is Göksin Sipahioglu! The first time I met him he was coming back from Thailand with a report on transvestites. It’s pretty raw and I’m a little embarrassed to look at his photos. I did not suspect that we would start a great career together later.

A new team of reporters is being set up, in addition to Jean Desaunois who became a partner and future boss of the Imapress agency, Gérard de Villier worked from time to time. He was not yet the author of the SAS spy novels.

One day for a job requested by Desaunois and which was not conclusive, they had words, words which end in a rush and almost in punches! “You are leaving this house!” You are fired. “Said Jean Desaunois, and Gérard de Villiers answered” I do not need this house to work, I will soon have more money than you and you will hear about me! ” No comment !

Another character, Hubert Le Campion. He told about his meeting with Lova de Vaysse for a book “Souvenirs de reportages”, never published.

“I was in Paris, I had been waiting for a big story for weeks. The story is about the barricades in Algiers, I left at my expense. I had  a one-way ticket on a Breguet Deux-Ponts by night, the cheapest possible. I had 200 francs left in my pocket. In Orly, a Caravelle arrived from Algiers. I approached a passenger who was getting off the plane. He looked at me with suspicion. I’ll learn later that he had negatives in his socks! ”

“He agreed to have a drink at the airport bar. Introducing himself, Lova de Vaysse, director of the agency Reporters Associés. He dissuaded me from leaving, but in front of my determined attitude, he gave me 200 francs note ( 447 €). I doubled my capital. He told me to take the room he kept at the Geneva hotel in Algiers and  to send him my photos. He left me his card which I carefully kept in my wallet. I read it over and over again on the plane to memorize it. I felt it was my chance. I worked like a frenzy for 15 days … ”

There was also Jean-Pierre Thévenin who lived in Nice and covered events on the Côte d´Azur, a Breton from Lannion Jean-Yves Marrec who covered the Breton independence movement. Baudouin Wehuizen, son of the director of the Flemish magazine De Post, did a two-year internship at the agency.

Pierre Menochet, future partner of Jean Desaunois in the Imapresse agency, met Lova de Vaysse in Algiers and replaced Jacqueline de Vaysse in the editorial office. Monique Koutnetzoff made her entry as secretary in February 1962.

Charles Bébert a resident of Nice who covered the south of France. Gilbert Regazzi entered the lab part-time with Gérard Lamade, a Basque who  came from Naval Aviation like me.

There are many memories between 1955 and 1969 … Reportages also: the Algerian War, the Suez Canal, the Prague Spring, the return of De Gaulle, his election, his press conferences. And then, The evenings of the Lido, the extinction of an oil well, my various events …

In May 68, Jacques Florent photographs the demonstrations. He came in the agency covered with blood. What happened to you ? “I wanted to hold the motorcycle of a gendarme to help him, he clubbed me believing that I wanted to steal his motorcycle.”

In the year 68 two young guys asked to come in the lab, to learn how to take photos: Michel Giniès and Jean-Gabriel Barthélémy, 17 and 18 years old. They messed up a bit by bathing in the concrete photo wash tanks, but they quickly became gifted.

The news too. I remember the Fourquet affair in Cestas in 1969, a scoop of Gérard Leroux who disappeared from the agency a year later.

In the summer of 1969, Lova de Vaysse organized a large picnic in his country house in Blaru. The whole agency and many friends were invited. But many photographers had already left Reporters Associés to join Hubert Henrotte and the Gamma agency. At this rural meeting is Jean Desaunois who left the Associated Reporters to found “The House of Iran” on the Champs Elysées … Lova de Vaysse as great prince organized in 1965, the wedding of his daughter Catherine on the Champs- Elysées at the Ledoyen restaurant.

But the contract with Stern has not been renewed!

After a trip to Morocco with her husband, Jacqueline de Vaysse caught a virus from which she never recovered well. I remained one of the last faithful, Lova de Vaysse told me that he would associate with Jacana! Absurd!

He had lots of ideas in his head, but I no longer believed in the future of Associate Reporters. In July as a great lord I resigned … Two months later it was bankruptcy, and I would also have lost my unemployment rights.

As a good Breton I have no regrets…

This article first appeared on the A L’OEIL – Journalism & Photography website : http://www.a-l-oeil.info/blog/