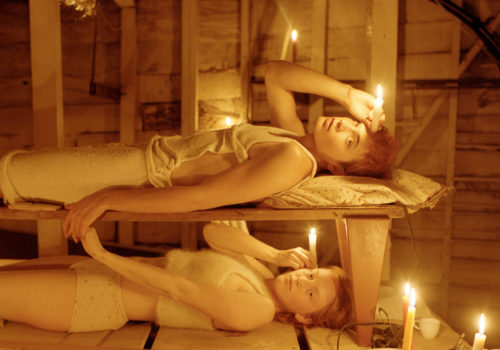 The Ravestijn Gallery is proud to announce A Glint in The Kindling, the inaugural European exhibition of American artist Michael Bailey-Gates. A Glint in The Kindling will bring together photographs from artist’s growing oeuvre to introduce a new audience to their belief in a world where gender, identity and sexuality are boundless conditions.

Michael Bailey-Gates uses photography to dissolve the binary world and affirm new ways of being that are in perpetual motion. In their intimate, often theatrical photographs of themselves and their friends, the definitions we’ve been conditioned to use become futile. Man and woman; masculine and feminine; straight and gay; all ebb into irrelevance. Even gender itself seems somehow immaterial.

How, for example, is one meant to talk about Birthday, in which Bailey-Gates sits on the floor against a blank backdrop, naked and cradling a baby on the verge of tears. The makeup Bailey-Gates is wearing is striking but flawless, their head adorned with hair that cascades down to their shoulders. Describing Birthday in literal terms is simple enough, but to try and talk about it any further isn’t. Most would describe Bailey-Gates’ hair as feminine, their serene face too. Yet most would then describe their physique as masculine, before describing the act of cradling as maternal. The more we see-saw between rigid definitions, however, the more we realise it’s those very definitions that restrict our perception of who Bailey- Gates is in the photograph. The words we usually rely on feel superficial, inadequate to express the human in front of us.

In turn, looking at Birthday evokes more questions about how we’ve been taught to look at others than about Bailey-Gates themselves.

Attempts to categorise Bailey-Gates’ photography too seem unconvincing. Some would say their photography feels neoclassical, some resoundingly of the present and some would say both. Others would look to the canon of photography and say that there are glimpses of Robert Mapplethorpe and Nan Goldin. But those descriptions soon come up short as well — accurate, but not entirely. Each bid to describe Bailey-Gates and the photographs in A Glint in the Kindling is taken, teased apart and gracefully tossed aside.

Instead, what Bailey-Gates invites us to do through A Glint in the Kindling is look without reaching for the terms we know. They invite us to simply look, unfettered by expectations or tradition. They invite us to look at bodies that joyfully drift between definitions, that find agency and poise where others find ambiguity and that are attuned to each individual and each moment. Objects, postures, relationships, clothes and actions we have been told are exclusive to a few are here reclaimed by anyone.

In almost all of the photographs in A Glint in the Kindling, Bailey-Gates or their friends look towards the camera. We are met with self-assured gazes — direct, deliberate. Yet they are never biting. It’s this lack of hostility, furthered by the liberated bodies seen throughout the exhibition, that makes Bailey-Gates’ photographs so disarming. Even though they confront, transgress and dismantle, each time we look we’re warmly acknowledged by their gaze and invited to step into their worlds. At the same time, it is these same self-assured gazes that make it clear Bailey-Gates and their friends are unwavering in the face of cynicism and spite. They exist only for themselves and they are not trying to convince. For them, these worlds are already real. Importantly, however, these worlds are not removed from ours. They are one and the same, just seen differently.

Michael Bailey-Gates : A Glint in the Kindling