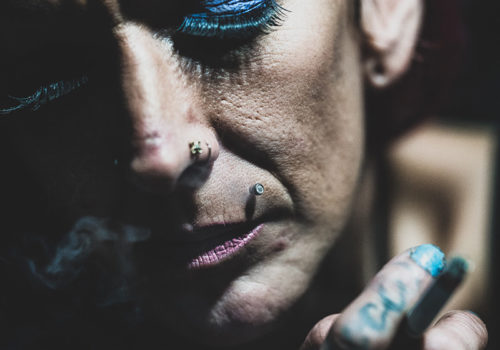 Suzanne Stein is an artist who devotes herself mainly to street photography. Her images are poignant and her work is often very close to documentary.

She studied at the University of Pennsylvania, the Pennsylvania Academy of Fine Arts and the Art Students ‘League in New York. Currently published in Southern California, she is particularly interested in Los Angeles and Skid Row. She is always on the lookout for characters and stories that captivate her, presenting visual and contextual narratives using her dual approach as a street photographer and a writer.

Her images highlight the dark side of our society and tell of her encounters with these unique lives, mainly those of people she meets on her travels and living on the margins of our cities. One of the latest stories is that of Ginette, an elderly lady who has lived in the same dingy little East Village apartment for 46 years. Time seems suspended there. She lives there surrounded by her treasures: a collection of small everyday objects

Suzanne’s approach is never intrusive and her gaze is always benevolent.

Suzanne Stein : The first time I felt that a photograph I made was taken by a real photographer was one that I did in Downtown Los Angeles. It was on Skid Row. It was a black and white image of Jerry, who was panhandling on the street. Jerry had suffered a disfigurement from a gunshot wound and was very intimidating initially but a gentleman once you started talking with him. Although it’s an incredibly simple image on the surface, its complex underneath and it’s when I just knew….I’m a photographer. So that’s my first real click, when I became Real….like the story about the Velveteen Rabbit, a stuffed animal who became Real once he was loved by a child.

Suzanne Stein : I love Saul Leiter, Alexandra Boulat. I don’t spend much time studying other people’s work…but I think that work by Henri Huet and W.Eugene Smith, and Helen Levitt, maybe Martin Parr—images I saw when I was younger of WWII and Vietnam generally—have created an invisible foundation in my mind. I feel the most conscious inspiration from looking at paintings for some reason…Norman Rockwell and Vermeer among many….all very very different but hugely inspiring.

Suzanne Stein : There are a lot of images I would have liked to have made! I think about them all day long, the ones I missed. Simple stuff, not just the massive photographic fantasy images we all hunger to witness. In Williamsburg, Brooklyn recently there was a Hasidic man carrying his beautiful little daughter just before sunset on Shabbos, big giant snowflakes were dropping and the sight of her little white hand with a red knit mitten hanging from her wrist, his hands clasped about her….it was a painting! And …I missed it because to grab the image would have meant that I’d have to have been very aggressive in a quiet moment, and it would have been a hugely inappropriate intrusion. I’ve been thinking about this loss for days now….

Suzanne Stein : I have a few pictures that were very emotional for me…there’s a portrait I did of India in a doorway on Skid Row, her eye blackened from an abusive punch. There’s a picture of Ginette on her bed, in terrible pain, another of Doreen and Gary in an embrace on Skid Row. 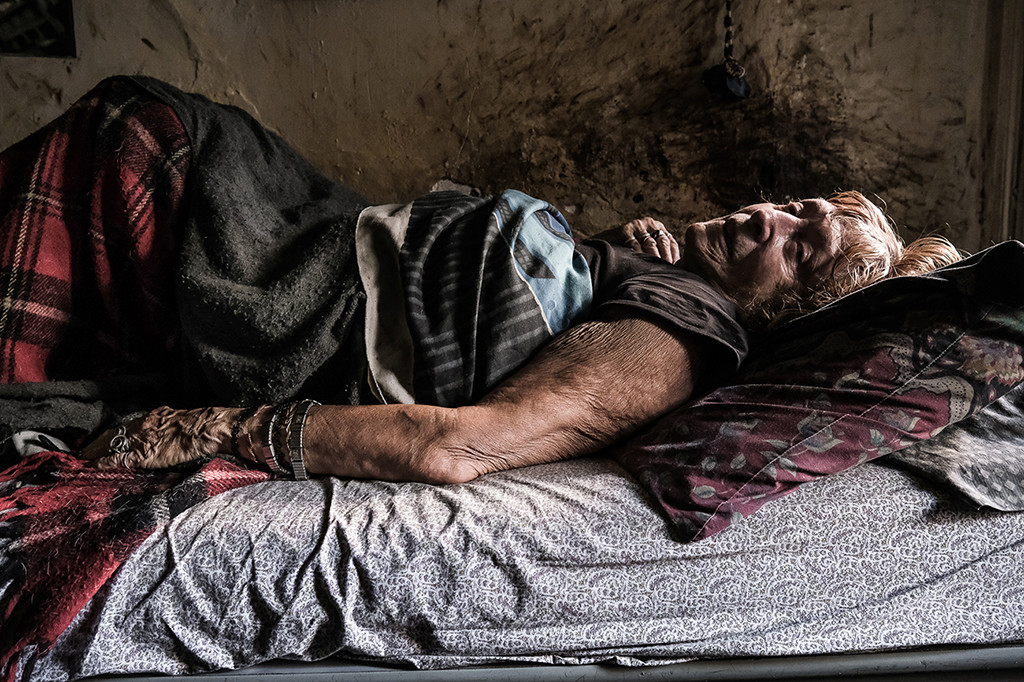 December 2019. Ginette in bed, immobilized by means of arthritis and degenerative spinal disorders. Added to this is chronic pancreatitis, diagnosed very late by an arrogant and distant medical profession. That morning, she had to give up attending the East Village Parade, not being able to get up. Suzanne Stein

Suzanne Stein : The picture of India I did in a doorway on Skid Row in downtown Los Angeles makes me very angry. She was beautiful and very delicate and vulnerable, and a constant target for all kinds of abuse. Her black eye in the image, coupled with the many distrustful, demeaning looks I witnessed her receiving as I photographed her is infuriating. She has since been reported missing by her family.

Suzanne Stein : Qualities! The first and most important is intense devotion, followed closely by originality, stamina and persistence…and a willingness to forget about what other people think of you. The ability to approach a situation with a perspective that is not influenced by prevailing opinion or tastes. Having a thick skin, becoming impervious to rejection of one’s work. Because if you allow rejection to sink into your psychology as a photographer it can and will wreck you.

Suzanne Stein : This secret…I’m in constant pursuit of! The secret to making the perfect image is to believe in your instincts…and not allow self criticism to interfere in your process. Just following impulses, listening to them unerringly. And understanding that there are no really perfect images…knowing that great work can be flawed…imperfections can be captivating.

The one you use currently ?

Suzanne Stein : Main camera is the Sony A7riv. I also sometimes use my A7riii and the Fujifilm X100V and the XT4.

Suzanne Stein :  No drugs of any kind ever for many years… Now photography is my binge, along with ice cream. But when I did use drugs a long time ago, it was codeine that I was most likely to abuse.

Suzanne Stein : I don’t have many! I am forgiving and persistent.

Suzanne Stein : Of mine? A picture I did on 6th Avenue of cousins, all under six years of age and drinking sodas. Banknotes are a bore…so why not use a contemporary image of life, insert a little humor and realism simultaneously. 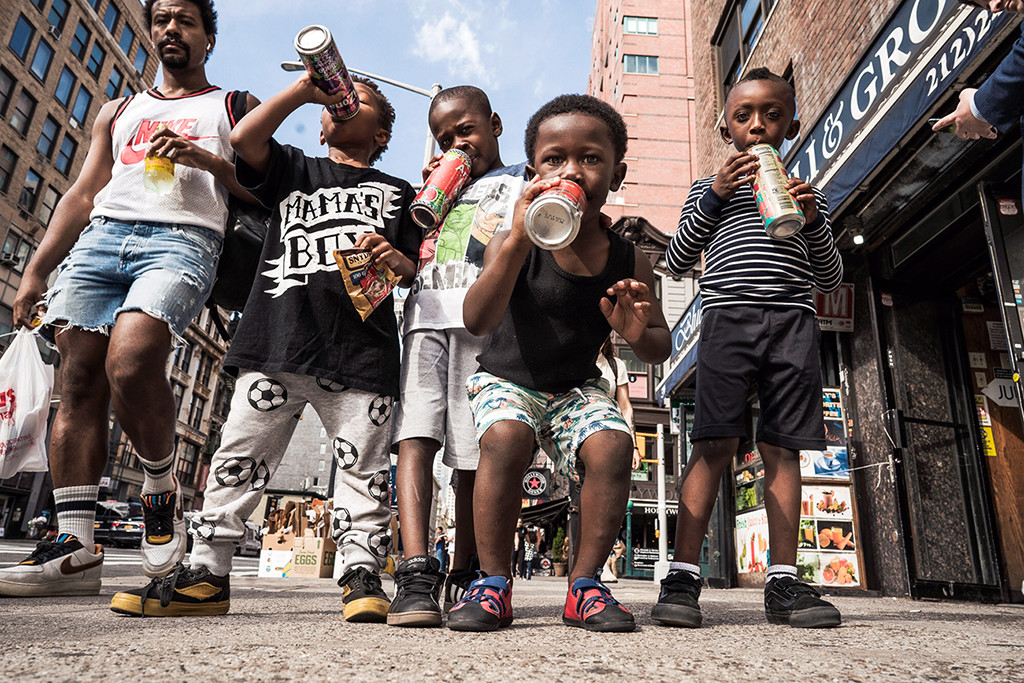 The job that you never could do ?

Suzanne Stein : I would have difficulty with a job that required me to present a rigid viewpoint, one already established by the client, one that obscures or leaves out essential and truthful elements of a story or situation. I am not a cheerleader and unfortunately that doesn’t always work in my favor!

Suzanne Stein : I am not generally extravagant….but I bought an incredibly expensive and now beloved 135 mm lens last summer. And followed that up with a 90 mm! And I like artisanal ice cream…and will spend whatever it takes to indulge. I love desserts and excellent lenses for my cameras….

Suzanne Stein : I regret spending far too much time in my life tolerating abusive behavior. That was time wasted, never to be retrieved. One act I deeply regret is giving away my beloved Yorkshire Terrier when my son was a baby. I am haunted by that now and can hardly think about the loss of her company.

Suzanne Stein : Is god a Him? If there’s a creative force in the universe,  I doubt that it’s in the form of a human. I think god is either everywhere or nowhere. But if we assume that god is in a physical, photographable form I would photograph God in the same way I photograph anyone else on the street. Brutal realism is definitely called for.

Suzanne Stein : I don’t know that I or anyone else has one image that could represent the current state of the entire experience of the world. I think of “The World” as one of many billions of experiences of an individual life, whether that life is human or insect or whatever. Not just various facets of reality or differences in cultural expression. A mosaic, a kaleidoscope, a constant alteration. Much of the world is suspended in grief while others are out in cafés, brunching madly on a Saturday afternoon. It’s so clearly stated, everywhere I look in New York City, that’s for sure. I have one that I took in midtown that says something about life in the USA. A woman is napping, lying on the sidewalk next to a huge pile of garbage. Behind her a city bus passes, advertising a wealthy lifestyle, the word “Billions” emblazoned in gold lettering. Very ironic picture. My favorite picture ever is W. Eugene Smith’s Tomoko Uemura in Her Bath and it says everything. So much subtext and story, love and loss, injustice and grief, endurance, perseverance, monstrous and stunningly beautiful. I vote for that image. 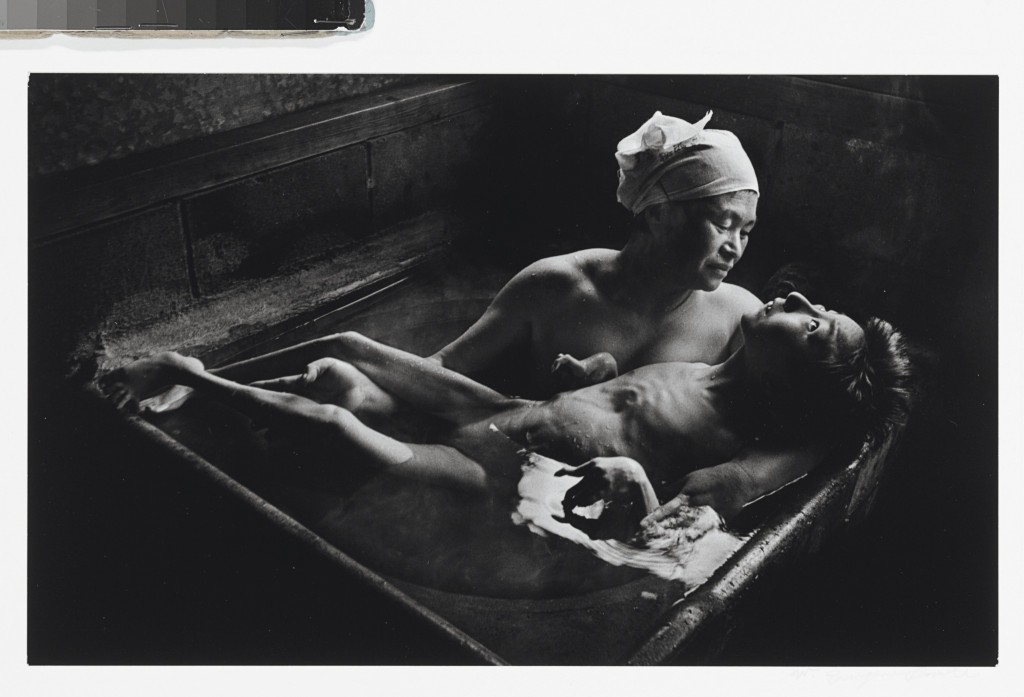