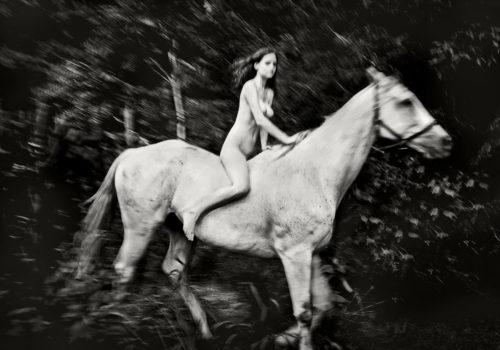 A former American lawyer specializing in civil rights and constitutional litigation, Renée Jacobs is now well known for her nude photographs of women – her favorite subject – and is thus fulfilling a childhood dream. Atypical in her approach, her reconversion quickly earned her the International Photography Award (IPA) in 2008. While working as a photojournalist for The New York Times and the Philadelphia Inquirer, her photographs were added to the collections of the John F. Kennedy Presidential Library and Museum. Her vision of women is very personal. Fantasy, imagination and a bit of voyeurism, here is a tasty mix of images that could invite you to some guilty pleasures…

Several books pay tribute to her work. And for her last book POLAROIDS, she has again received the Book/Fine Art Award, 2022. For, she has been exhibited and published all over the world.

In addition to POLAROIDS, her solo monographs include “Werkdruck”, “Renée Jacobs’ PARIS” and “Rêves de Femmes” (Photo-eye Book of the Year 2014).

Her work frequently appears in Taschen anthologies and has been featured in magazines such as Elle Italia, Vanity Fair France, Lui, Playboy Germany, the British Journal of Photography, AnOther Magazine and i-D in Japan, Italy, France and the UK.

Now settled in the beautiful mountains west of Montpellier, where she lives with her wife, Renee continues to exhibit and publish worldwide.

Your first photographic trigger ?
Renée Jacobs : Pulling the first 35mm b&w negatives I developed off the metal reels in a darkroom in high school. I was transfixed.

The man or woman of image who inspires you?
Renée Jacobs : I’m transported by those early images from Paris and of women—Lartigue, Cartier-Bresson, Man Ray, Brassai, Kertesz, Marianne Breslauer. Of photographers working now, I’m so inspired by the fearlessness of Donna Ferrato.

The image you would have liked to make?
Renée Jacobs : Either the Marianne Breslauer self portrait or this Stieglitz of O’keeffe

The one that moved you the most?
Renée Jacobs : Edouard Boubat’s Lella—Perhaps my favorite photo of a woman ever. It has everything—gorgeous light, composition, mystery, longing, emotional intelligence.

And the one that made you angry?
Renée Jacobs : The hideous faux lesbian photos of Melania Trump.

A key image in your personal pantheon?
Renée Jacobs : Tiana’s Hair In the Wind—The first photo of a woman where I felt I was successfully translating my feelings into a photograph—the idea that so much of what happens in our desires is just a blur, something we may not fully understand or see clearly

A photographic memory from your childhood?
Renée Jacobs : The horrors of bad childhood outfits that make up our family photo albums. In America, they had something called Garanimals (I think they still exist) where your parents could match your clothes by animal or something like that. My sunglasses were always on point but those clothes—I think that might explain my aversion to color film.

With no budget limit, what would be the work you would dream of acquiring?
Renée Jacobs : Probably the Mona Lisa or Botticelli’s Birth of Venus or Primavera.

According to you, what is the necessary quality to be a good photographer?
Renée Jacobs : Compassion and the desire to hear and understand the longing in everyone you photograph.

The secret of the perfect image, if it exists?
Renée Jacobs : Light, composition and luck.

The person you would like to photograph?
Renée Jacobs : Monica Bellucci. And since we’ll be going back to Italy, I need to learn more about Italian women .

The camera of your childhood?
Renée Jacobs : I can’t remember the one I had in high school, but my earliest photojournalism was shot with a Nikon FM.

The one you use actually?
Renée Jacobs : A digital camera I don’t like very much so I’m on the hunt for something else. I would love a new batch of Polaroid Type 55 film so I can shoot with my Polaroid 110 again but alas it’s like a unicorn.

The best way to disconnect for you?
Renée Jacobs : Walking in the mountains around our home in southwest France. Just a magical area.

What is your relationship with the image?
Renée Jacobs : Photography is an excuse to hear about the endless, infinite spectrum of what women desire. It helped me understand my own. In the introduction to my book, “POLAROIDS”, French painter Gregory Forstner wrote that “desire needs context.” And I think that’s why I take photographs. To give context to my desires and the women I photograph.

Your greatest quality?
Renée Jacobs : My passion for life and understanding the fact that we’re here for but a blink of an eye.

Your latest folly?
Renée Jacobs : Driving, Apparently, I am not as good as I think that I am, as my wife well knows.

An image to illustrate a new banknote?
Renée Jacobs : Josephine Baker. What a remarkable woman.

The job you would not have liked to do?
Renée Jacobs : Anything with math and/or a desk.

Your greatest professional extravagance?
Renée Jacobs : Travel. As an American, I’ve been obsessed with photographing in Europe for a long time. It will be time to hit the road soon again to finish working on my ITALY book.

What do you think are the bridges between photography and design?
Renée Jacobs : I see both in a sense as being very binary in the reactions they elicit—It’s either “wow!” or “why?”

The city, the country or the culture you dream of discovering?
Renée Jacobs : France, toujours France. Moving to the southwest of France has been perhaps the biggest gift I’ve given myself.

The place you never get tired of?
Renée Jacobs : Driving back to our house from Montpellier, you come across these vistas—mountains, gorges and rivers—that rival anything in the American southwest. Very close to our house, there’s a portion that just takes my breath away every time. We’re extremely lucky to live in France.

Your biggest regret?
Renée Jacobs : Not becoming absolutely fluent in French before we moved here. But working on that.

In terms of social networks, are you more into Instagram, Facebook, Tik Tok or Snapchat and why?
Renée Jacobs : Instagram because it’s a dream for seeing what’s happening in the photo world @reneejacobsphoto. The censorship on all of them is ridiculous—facebook perhaps being the worst. Haven’t used tiktok or snapchat.

Daylight or artificial light?
Renée Jacobs : Daylight especially the golden hour. I don’t miss much about Los Angeles but I do miss that end of the day light.

Which city do you think is the most photogenic?
Renée Jacobs : Paris

If God existed would you ask him to pose for you, or would you opt for a selfie with him?
Renée Jacobs : Neither, I’d be too busy screaming and begging for answers to the age old questions—Why war? Why cancer? Why hatred? Why suffering? Why do your “followers” inflict so much harm in your name?

If I could organize your ideal dinner party, who would be at the table?
Renée Jacobs : Well, Gertrude Stein and Alice Toklas were doing that in Paris in the 1920s and 1930s. I’d love to crash one of their salons with Romaine Brooks, Renée Vivien, Djuna Barnes, Matisse, Picasso and bring along da Vinci and François I, Obama, Bowie and for my wife, Einstein.

The image that represents for you the current state of the world?
Renée Jacobs : Delacroix’s “Liberty Leading the People.” We can do this. We can take it back. America’s slowly walking back from the precipice. Hopefully, the rest of the world will as well.

What is missing in today’s world?
Renée Jacobs : As Elvis Costello would say, “Peace, love, and understanding.” Inclusion. Diversity.

If you had to start all over again?
Renée Jacobs : Move to France at an earlier age!

A last word ?
Renée Jacobs : Infuse the art world with a new breed of gatekeeper—women, queers, BIPOC, young people. The fossilized ideas around imagery by women and of women need to be replaced. Along those lines, personally, I would love to see the terms “male gaze” and “female gaze” replaced by “empowering gaze” and “disempowering gaze.” I think all photographers are capable of both. We need to empower the empowering gaze. Women need not be desexualized, but it should always be our choice.