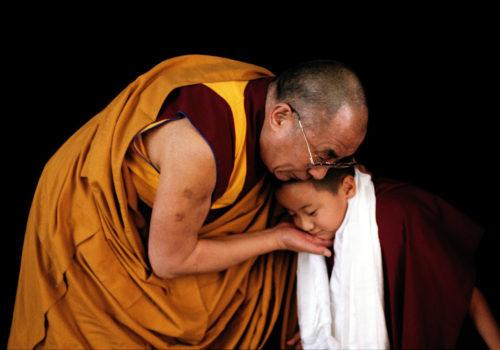 Matthieu Ricard : Photography as a source of hope

His passion for photography goes back to his childhood, he started to capture the world around him at the age of twelve.

He was not a city kid and always felt better in the country side. During his adolescence, Matthieu Ricard was guided by André Fatras, one of the pioneers of wildlife photography in France. He also had the good fortune to meet Henri Cartier-Bresson at the age of 18 and later became his friend. Later, he continued to learn in the field. After settling in the Himalayas in 1972, he photographed his spiritual masters and the world they lived in. His goal was to share the splendor, strength and depth of their world.

As a Buddhist monk, Matthieu Ricard shares through his art, all forms of beauty, whether spiritual, human, altruistic, or emanating from the wild side of the world.

His new exhibition “Hymn to Beauty” has been on display since April 13, on the roof of the Grande Arche de La Défense! More than 150 photos that will allow you to discover the artist’s universe, between encounters and life experiences, testimony of his simple love for the wonders that surround us. An opportunity to submit him to our questionnaire.

NB: All of his royalties (conferences and photographs) are dedicated to the humanitarian association he co-created twenty years ago, Karuna-Shechen (www.karuna-shechen.org) which helps more than 400,000 people each year in Nepal, India and Tibet in the field of education, health and social services. New actions will soon be undertaken in France.

Your first photographic trigger?
Matthieu Ricard: Reflections in a puddle, at the age of 13, with a Foca Sport.

The man of images who inspires you?
Matthieu Ricard: Henri Cartier-Bresson.

The image you would have liked to make?
Matthieu Ricard: Portraits of Tibetan spiritual masters who lived before the invention of photography.

The one that moved you the most?
Matthieu Ricard: The one of a dead young migrant child, washed up on a beach in Turkey.

And the one that made you angry?
Matthieu Ricard: I don’t approve of anger, but certain images of war and famine generate indignation and the desire to act to relieve suffering.

If you had to choose only one image among yours, what would it be?
Matthieu Ricard: A portrait of my spiritual master Dilgo Khyentse Rinpoche, looking out a window (MR346).

A key image in your personal pantheon?
Matthieu Ricard: MR 585. The flying monks of the Roof of the World in front of the Atlantic Ocean, during a European tour of Tibetan sacred dances by the monks of our monastery of Shechen in Nepal. Contrary to what one might think, this is by no means a photographic montage but a single shot (a slide, and I only took one shot, I had a manual FM2 without a motor) of seven monks jumping at the same time, luckily perfectly synchronized. 1997.

What is the necessary quality to be a good photographer?
Matthieu Ricard: Wonder.

The secret of the perfect image, if it exists?
Matthieu Ricard: Beauty is in the eye of the beholder. For each person, a different perfection.

The person you would like to photograph?
Matthieu Ricard: Shakyamuni Buddha.

The camera of your beginnings?
Matthieu Ricard: Nikon FM2.

Which one do you use today?
Matthieu Ricard: Canon R5.

Your favorite drug?
Matthieu Ricard: The inner freedom that frees you from all forms of drugs.

The best way to disconnect for you?
Matthieu Ricard: To feel the interdependence that connects us to all beings and to the whole world.

An image to illustrate a new banknote?
Matthieu Ricard: An outstretched hand with the motto: “What is not given is lost.”

The job you would not have liked to do?
Matthieu Ricard: Dictator.

Your greatest extravagance as a photographer?
Matthieu Ricard: Extravagance, I don’t relate well to that word, so if it’s okay with you, I can answer the question: “Your most unusual image in your life as a photographer? “One day in Kolkata, India, in the 1970’s, I saw a man walking by pulling a Tanga (a cart that carries up to 5-6 passengers, normally pulled by a hapless horse, which was still a common means of transportation in the cities of India at that time), then a rope, then the horse following, for once quiet. I still have this image in my head and it is the best picture I have ever taken. These horses have a hard life, are overexploited and often injured by cars in traffic.

What do you want to share through your images?
Matthieu Ricard: The beauty of human beings, the beauty of the wilderness of the world.

What city, country or culture would you like to discover?
Matthieu Ricard: Certain places in Tibet where I have not yet been after twenty-one trips to the Roof of the World.

The place you never get tired of?
Matthieu Ricard: The Himalayas.

Your biggest regret?
Matthieu Ricard: I have been very fortunate to live the life I have lived and would die without regret.

Facebook, Instagram, Tik Tok or Snapchat?
Matthieu Ricard: Nothing… I don’t use these media (my friends from the humanitarian association Karuna-Shechen do it on my behalf, but I don’t subscribe).

Color or B&W?
Matthieu Ricard: Color (but also the “color without color” of some almost monochrome images).

Daylight or artificial light?
Matthieu Ricard: Daylight and night light. I always work in natural light and do not use flash.

If God existed, would you ask him to pose for you, or would you opt for a selfie with him?
Matthieu Ricard: Ask him what he thinks the next time you see him.

Which image do you think represents the current state of the world?
Matthieu Ricard: The melting of the glaciers.

What is missing in today’s world?
Matthieu Ricard: Kindness. There is no lack of it, but it should be multiplied.

And if everything had to be redone?
Matthieu Ricard: There is still so much to do before we do it again… We are the result of the past and the architect of the future.