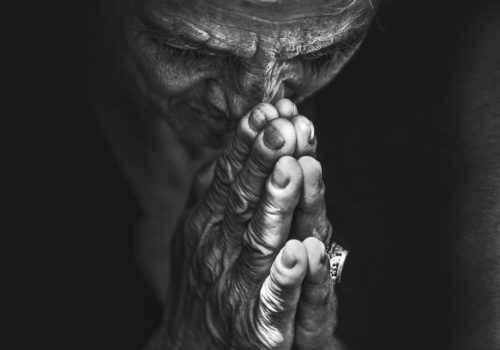 He often says of himself that he is still an amateur photographer, but Lee Jeffries‘ images largely prove the contrary. They are intense, serious, authentic and above all very human.

Self-taught, solitary, emphatic, he is open to all kinds of influences and new experiences and affirms loud and clear that love is his driving force and the catalyst of everything. A conviction that has brought him great moments of joy and pleasure, while passing through periods of extreme loneliness from which he still suffers today. Photography allows him to express his beliefs and his compassion. Fascinated by the power of the gaze, his images, often in B&W, emanate a great spirituality.

Passionate about sports and more particularly soccer, he started his career as a sport photographer. It was during a marathon while walking through the streets of London that his eye was drawn to a young homeless woman lying in a sleeping bag in a dark alley. He started to photograph her discreetly, but she spotted him and was furious of his intrusion. Instead of passing by to avoid a confrontation, he went to meet her, took an interest in her and tried to understand how she got there. His view on homelessness changed. He became  aware that for most of us, these men and women are transparent. He then decided to put them in the light in the hope of attracting attention and that all those who would see his images would realize that these people are human beings like us. He made them the subject of a series he called “HOMELESS”, in order to raise funds for the homeless.

So since 2008, he travels the world to photograph the homeless. An adventure in which he gets intensely involved, making it a point of honor to know personally each of those who pass in front of his lens. Sometimes sharing the brutality of their daily lives and sleeping in the street beside them: “It’s the only way to gain their trust and build a real relationship with them to give life to my portraits,” he explains.

Portraits with a very particular aestheticism, with an exacerbated sensitivity, moving, expressing most often an extreme suffering while highlighting the universal beauty of humanity in what is the most dramatic.

Lee Jeffries : It was shot in Trastevere, Rome. It was of a woman praying in the light on the steps of the “Basilica of our Lady in Trastevere”.

Lee Jeffries : I’m inspired by the people I meet. Its their lives and stories that prompt me to make photographs.

Lee Jeffries : I would love to shoot a portrait of Kristen Scott Thomas. I have tried to get in contact for years

The one you regret you didn’t made ?

Lee Jeffries : I dont really have regrets in terms of photographs. The only regrets I do have is that I couldnt help the people I photograph more. I couldnt wave that proverbial magic wand to make their lives better.

Lee Jeffries : All my images move me. They are born of deep relationships. My images are deeply personal.

Lee Jeffries : Do photographs really make one angry? If so, I have not experienced that emotion.

If among your images you had to choose only one ?

Lee Jeffries : It would be “Trastevere”. It underpins everything I have done photographically since. Deeply humain with wonderful metaphysical properties, this is the image I want to be remembered for.

Lee Jeffries : Lover. Its what I have been searching for my entire life.

Lee Jeffries : Love. Its an antidote to my loneliness… which I have suffered from for years.

Lee Jeffries : That is a question for others. I consider myself to be a normal human being, with decent values. I do the best I can for my family and for others. Let the world decide how they remember me based on that and my work.

Lee Jeffries : In these times… a nurse or doctor. Unbelievable bravery and commitment to their jobs. We all owe them so much.

Lee Jeffries : My first exhibition in Rome. Financed by myself it was a huge risk. Im so glad I took it though.

Lee Jeffries : Not being married. I’ve been searching for that one love for 50 years.

Lee Jeffries : Black and White. I love an amazing black and white with significant tonal range.

Lee Jeffries : I’d just thank him for accepting me into Heaven.

Lee Jeffries : I remember seeing an image of a father carrying his deceased daughter in war torn Aleppo. Its an image that I cant shake from my mind. Why do humans do such acts to each other?

Lee Jeffries : Equality. Both financial and in terms of racial division. We need to work harder to get this right.

And if everything was to be remade?