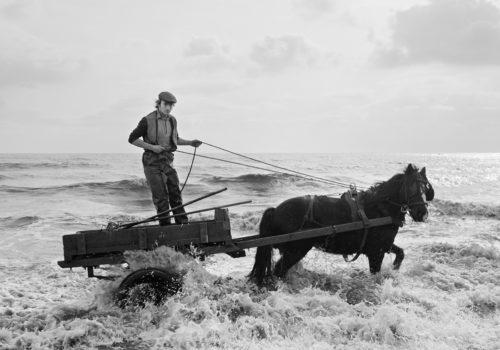 The Photographers’ Gallery this autumn presents a full-career retrospective of work by one of the UK’s most important and influential post-war documentary photographers, Chris Killip (1946-2020).

Taking place over two upper floors of the Gallery, the retrospective exhibition of more than 150 works serves as the most comprehensive survey of the photographer’s work to date and includes previously unseen ephemera and colour works.

Grounded in his sustained immersion into the communities he photographed, Chris Killip’s photographs of those affected by economic shifts throughout the 1970s and 80s in the North of England remain without parallel. Whilst marking a moment of deindustrialisation, Killip’s stark yet tender observation moves beyond the urgency to record such circumstances, to affirm the value of lives he grew close to – lives that, as he once described ‘had history done to them‘,  who felt history’s malicious disregard and yet, like the photographer himself, refused to yield or look away.

From early work made in his native Isle of Man, through overlapping series’ made over two decades in the North of England, Killip’s approach to portraying communities is explored.  Against a background of shipbuilding and coal mining, he witnessed the togetherness of communities and the industries that sustained them and stayed long enough to see their loss.  At Lynemouth, for his series ‘Seacoal’, he photographed men on horse-driven carts reclaiming coal which had been discarded into the sea by a nearby mine, and at Skinningrove he  documented a group of young men, their friendships and labours as they waited for the tide to turn.

The exhibition, curated by Tracy Marshall-Grant and Ken Grant, also draws upon less familiar work by a photographer whose life and career has proved so influential in shaping British photography. Killip’s dedicated recording of the miners’ strike of 1984-5 and his engagement with shipbuilding a decade earlier, remain lesser known yet pivotal works that betrayed not only a changing economy, but the concerns of a photographer moved to witness them.

In dialogue with the prints made by the photographer towards the end of his life, the exhibition also considers Killip’s photo books, drawing on early maquettes to map the development of books acknowledged as landmarks in the genre and offer new perspectives on the photographer’s storytelling.

The exhibition is accompanied by a major monograph co-published with Thames and Hudson, edited by Ken Grant and Tracy Marshall- Grant and designed by Niall Sweeney. The book includes a foreword by Brett Rogers, in depth essays by Ken Grant and texts by Amanda Maddox, Greg Halpern and Lynsey Hanley.

The exhibition will tour to the BALTIC Centre of Contemporary Art in 2023.