The Lost Japan of Thierry Girard, so desu ka, lost in translation 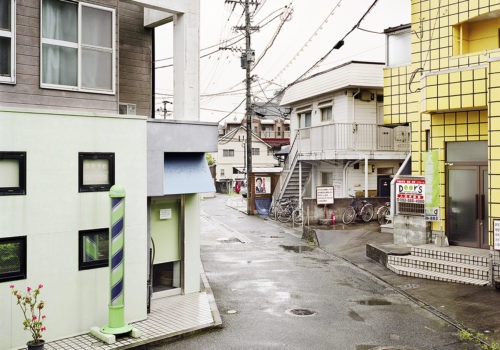 At the Fernet-Branca Foundation in Saint Louis, a stone’s throw from Basel, the photo exhibition of Thierry Girard opened with a title as long as the river of no-return: “Through forests, towns and villages, along railways and paths”. It covers his photographs of Japan but also General Leclerc’s battlefields in eastern France and his wanderings leading to Belfort’s Lion Statue. As we became acquainted since the days of his “Victor Segalen’s Great Diagonal”, and his “Five Ways Four Seasons” exhibition in Shanghai, I shall allow myself to focus on his Far Eastern peregrinations, especially his work in Japan, more exactly an unusual Tokyo, seen along two railroad tracks. The first is the Yamanote Line, Yamanote means in Japanese “the Hand of the Mountain”, a kind of circular line, whose traffic remains dense and loaded, connecting the main stations to the urban centers of Tokyo. The second is the Tenjin Omuta Line which connects Fukuoka, the third largest city in Japan, to the city of Omuta, on the southern island of Kyushu, which is considered to be the birthplace of Japanese civilization (Wikipedia), where you also find Nagasaki, the historical place of the arrival of Christian influence and its repression (see the films “Silence” by Masahiro Shinoda in 1971 and by Martin Scorsese in 2016).

Is Thierry Girard trying to make a statement, to draw up an inventory of the place, like giving back  the keys to your landlord. “This is the state of the place as we left it.” A place where the photographer’s eye has inhabited for a time, for a certain duration, before triggering the shutter, the shot is then recorded into his sketchbook. One may ask the question of why, of the choice of the place, it is here that lies the “challenge” to borrow a term from horse racing betting, the reader is invited to take the place of the photographer, the place of the observer, to bet on why the photographer chose to place his tripod here precisely, and not anywhere else, along the poles and the electric wires, and other repair pipes of the railroad. We would always want to ask Thierry Girard, each time, the reason for his shots. Obviously, this is not about simple street photography, à la sauvette, as Cartier-Bresson would have put it. It is about putting down your 4×5 view-camera and observing and locating and recording a state of the place. What did he see? We risk getting lost in this game of seven mistakes. Why would one summarize Japan with two railway lines, I asked myself the question, before I found out that the Fernet-Branca Foundation was located precisely opposite the railway line that connects Saint Louis to Basel and Mulhouse. There is no randomness in Girard’s flanerie, no aimless wandering. To set off on a journey he would need a map, an itinerary, a guide, for the Voyage au Pays du Réel he used the Victor Segalen’s diary, following his itinerary day by day to arrive exactly at the place described in his logbooks.

Here, these rail lines and pathways of Japan could be interpreted in the sense of the contemplation of a landscape or an empty still life. A frequent traveler by train, symbol of change and destiny, Thierry Girard gets off at stations chosen at random, Because the railway line is also rich in symbolism. After his “Four Seasons in Vassivière”, I see here “the Way” of Taoism (Tao is the Way), the quest for emptiness in Chinese Chan or Japanese Zen. At first glance, one is struck by a remarkable lack of pursuit of the picturesque: that is the antithesis of the tradition in Chinese painting or even Japanese painting (Hokusai). With Thierry Girard we enter into the realm of the banal, into the normal, into the “nothing ever happens”, we are in the register of vernacular landscape, at the same moment we are into the long time, the time of pause, in a landscape that is sometimes frozen like a movie set, sometimes animated: like the blur of a train rushing through a railway crossing, in front of a billboard with whatever election campaign posters, the hand graphics of an advertisement for a massage parlor, the dark silhouette of a King Kong pausing in the middle of his climb on the side of a building, a line of helmeted and uniformed railroad engineers raising an arm together for a misinterpreted salute, a rotating barber pole with blue and green stripes outside a hair salon before a deserted crossroad, all the discreet charm of endless sadness. All these wirelines, these posts, these platforms, especially this mirror rectangle which stands in front of a “reduced speed” sign (in Japanese), like a photographic frame in a photo, endlessly reflecting the image of the railroad, its poles and its electric wires… Everything reminds me of the sequence shots of the great filmmaker of post-war Japan, post-Hiroshima and Nagasaki Japan, Yasujiro Ozu (1903-1963), whose characters constantly take the train to go from the province to the capital and spend a lot of time waiting on the platforms lost in their thoughts, like refrains in a song. This is Thierry Girard’s Lost Japan, but we could also reach out to Ozu’s narrative, the cinema of the un-spectacular, of the absence of drama, of space depleted of its content.

This Japan of emptiness is particularly condensed in this image of “Kurume – Tenjin Omuta Line”, with a fence separating a parking lot from the street, from which we can see the (cut off) legs of two pedestrians and a cyclist, the cut is materialized by a white and muted banner hanging on the other side of the fence, these pedestrians and this cyclist apparently waiting for a green light to cross the zebra passage and go towards a building covered with white panels from which black windows are peering out, once again, there is nothing to see, except a hollow silence of meaning. It is therefore not a picture of Stephen Shore, but it could have appeared in a film by Ozu where, according to Gilles Deleuze, “an empty space is worth above all by the absence of a possible content”.

For Gilles Deleuze, “This is Ozu’s thinking: life is simple, and man never ceases to complicate it by stirring up the still water. There is a time for life, a time for death, a time for the mother, a time for the daughter, but men mix them up, make them appear in disorder, set them up in conflict. ”

Let me quote this sentence from the Inrocks which seems to describe the approach of Thierry Girard getting off his routine (train-train): https://www.lesinrocks.com/cinema/ozu-le-vide-et-le-plein-167717-27-07- 2018 /: “Gilles Deleuze, in Cinema 2 – The image-time, notes that Ozu’s cinema“ succeeds in making time and thought visible and sonorous ”. Conversely, it happens that these same characters, another form of apparent loss, seem, as if they were getting off their train, to stop, to linger, to pause, to rest, to suspend their movement … ”

At the Foundation Fernet-Branca (Saint-Louis), from 30 October 2021 to 13 February 2022 www.fondationfernet-branca.org

At the Belfort Museum – from May to September 2021