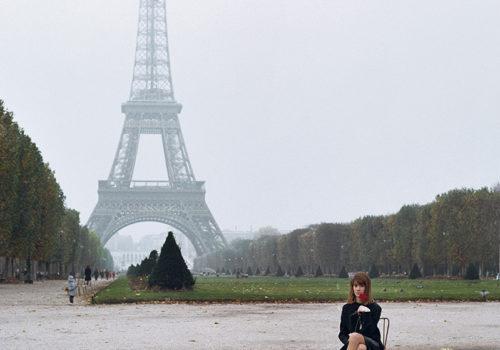 Françoise Hardy and the Eiffel Tower.
After all, I really liked Paris.
I had lived my good years there, those of more or less deserved success, years of loves that were light with definitive oaths, immortal friendships, and especially those where all the chances smiled on me.
A divorce later, I left to live in the United States, an old childhood dream; I still believed in the myth of the Elsewhere, we have the weaknesses we can have. After ten years in the world of advertising films, although grateful to this country for having opened its arms to me, I was a little tired of the obsession with success at all costs in New York at the end of the 1980s. Not being predisposed to become “the biggest, the most handsome and above all the richest”, I jumped and grabbed the hand extended by my sister Anne-Marie to return to France. These ten years spent within the team of the magazine Elle, of which she was the director, will be a delight.
Of course, Paris was no longer that of the 1960s, the Champs-Élysées were no longer deserted in summer, Saint-Germain-des-Prés had abandoned rue Saint-Benoît and the fantasy of the city was slowly fading under the weight of a new illness whose symptoms I recognized. In the offices, at the post office, in the supermarkets, I found this dull anguish of social failure, the unfriendly looks of forced competition, in short, the implicit constraint of success at all costs extended over the city. Looking at its streets, its monuments, its sky, Paris remained a party, but where had my Parisians gone? Those who loved to drown the nights to forget the days, the champions of social suicide for the pleasure of a word as brilliant as it is useless? Those who dared to be lazy without fear of being judged. I had the feeling of belonging to the last century, I mean the 19th century, of course. Today, “my” Paris no longer exists, its sidewalks have forgotten the dance steps of Fred Astaire in Funny Face. As my grandfather Jacques Porel wrote:
“My love of Paris has dark circles in his eyes. So, elsewhere, he rests.”