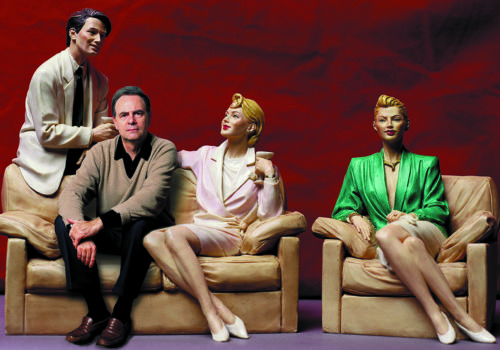 In a corner of the room, Daniel Filipacchi is sitting alone reading a newspaper. He likes this little restaurant, there are his habits. It must be said that from a very young age, in the 6th arrondissement, he has been at home. While reading an article in Le Monde devoted to the Nobel Prize awarded the day before to Patrick Modiano, he does not see that at this precise moment, the latter is entering the room in the company of his wife Dominique and their two daughters. As he installs his family at their table, Patrick sees Daniel very focused on his newspaper. Not liking to be noticed, for him, crossing a room is always a test. He nevertheless goes as far as Daniel. Immersed in his reading, the space of a second, this one does not notice him yet, then realizing that this is the friend whom the newspaper praises, he extends his hand to him congratulating him. And there, the moment borders on the height of delicacy. At first you might think that everything separates them. Their respective concerns have forged two opposite destinies, Daniel gets up late while Patrick gets up early, but in their own way both are creators. For Daniel, money is only a means of bringing together talents, with his hundred newspapers God knows how many he has nurtured. Patrick, like any writer, is a slave to his art and money is an abstraction and he only wishes to have enough to buy a house. In the end, their rallying point is respect for writing. If Patrick faces him, it is obviously not to mention the Nobel, but to congratulate Daniel on the publication of his book “This is not an autobiography”, released a while ago. Magnificent scene: an author who has just received the rarest, most coveted prize in the world, is congratulating an extraordinary man, yet so far away from him, but whose preponderant role in the press of the last century he has never forgotten.
So he, the famous writer with twenty-nine novels, celebrated by the cream of the literary planet, came to sincerely congratulate him for writing his first book. What elegance…