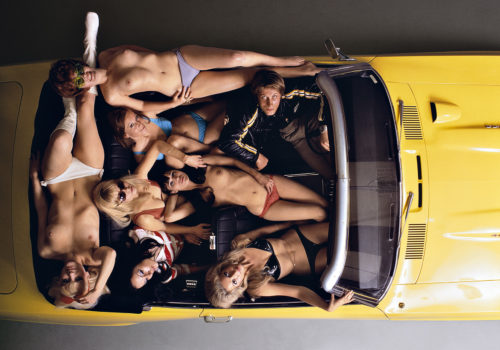 Jean-Marie Périer‘s Instagram Chronicles are pure wonders. Every 2 weeks, we publish one of them.

In the series “Do not judge yesterday with the eyes of today. » : The girls in the car
Yep, now James Bond comes across as an obnoxious sexist.
During my exhibitions, school teachers usually come to check if it is possible to show my photos to their students. I understand that very well. But when the arrive in front of this image, sometimes some have a movement of recoil tinged with bewilderment and they cancel the visit.
However, this is a good reason to explain to children that at the time there were newspapers, including “LUI”, which showed naked women whose salacious intentions went far beyond those few half-naked young women in a convertible driven by a successful singer. The thirty glorious years can raise your hairs today, I admit it even if I do not understand it well. Because finally, this photo was guileless since it illustrated in a primary way the song “J’aime les filles” (I love the girls) by Jacques Dutronc. Granted, the idea didn’t deserve the Nobel Prize, but it was innocent compared to the vulgar nudity displayed on newsstands. That we see contempt there surprises me a little. That day these young women who had come to participate in this schoolboy prank were rather happy to earn a living by spending an hour with us, and we ended the evening Jacques and I by having dinner alone in an Indian restaurant. We were far from the basic playboys with an easy wallet.
Okay things have evolved, but to call me sexist seems to me slightly exaggerated, not to mention that banning instead of explaining is a curious way of considering the beautiful job of a teacher.
Help Jean Yanne, show me the door quickly to join you, I’m tired of being the captive of a sanitized era where humor has to bend to get on the wagons of the sad well-meaning of today’s tight asses.