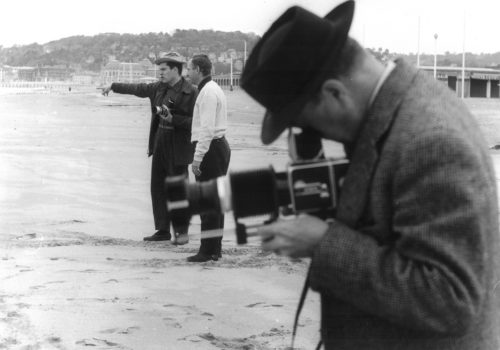 Jean-Marie Périer‘s Instagram Chronicles are pure wonders.
Every 2 weeks, we publish one of them.

Daniel Filipacchi, Jean Demachy and Maurice Tabard in 1957. (excuse the quality of the photo, I was 16)

For “Marie-Claire”, Daniel Filipacchi sometimes organized sessions outside Paris. This time we were in Deauville to take fashion photos. There was Jean Demachy, the artistic director of the newspaper, one of the meetings that will have counted the most in my life, and in the foreground, Maurice Tabard, a photographer that the people of the newspaper did not really appreciate at his fair value. Indeed, he was in charge of the maintenance of the Paris studio. This great artist had set up a small laboratory at the back near the toilets, his own world in which he processed his images with remarkable taste and precision. What little I know about photography is what he taught me. Then he cleaned up the mess in the studio at the end of the day.

When I think of all the pundits of the Prouvost group who came to show off in front of dream models, without speaking to Tabard, this silent poet… Pundits are like that, they have their heads in their plans for glory , successes, without even shaking hands with an old gentleman bent over his “Hasselblad”, in search of images that they will buy at the price of gold once he is dead…

As Daniel liked him, he had convinced the editorial staff to take Tabard along so that he could also take different pictures, thus bringing another style to what was being done in the “fashion” pages of the newspaper.

Last memory of this trip, for his pictures Daniel used a large wooden camera. And I had forgotten to bring the essential tripod to support the machine. Impossible to work on the first day, while another assistant brought it to him from Paris. Daniel didn’t even yell at me. We took the opportunity to have a lunch that lasted until sunset. At the time this city was empty. I don’t remember who said: “Deauville is near Paris but it’s so far from the sea…”