Best of September – The great publisher Robert Delpire passed away 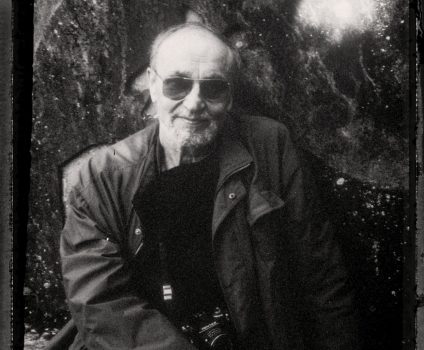 Some say that it was his eye, which is undeniable, but above all, it was his character, which, in his case, is closely related. His character was steady, loyal to what mattered to him, which seemed to go without saying, and curious, with that curiosity that had no room for false pretenses, but that was able to evolve, without ever being stuck on a particular point of view.

I remember when, as the first director of the Centre National de la Photographie, appointed by Jack Lang, he had created an award for young artists, “Under Thirty,” and we locked horns on the occasion of installing at the Palais Tokyo the works of the young award winners with whom I worked very closely and whom he didn’t appreciate at all. I also remember his capacity for enthusiasm, like when he met with Michael Ackerman whose work I forwarded to him the night before, and he decided right then and there to publish End, Time, City.

I hadn’t known him yet, and I was just taking my first steps in photography by browsing secondhand bookstalls on the banks of the Seine and at the flea market at Clignancourt. It was there, in an issue of the journal Neuf, that I discovered Brassaï and, in small format editions (already back then!), Henri Cartier-Bresson’s Les Danses à Bali and Robert Doisneau’s Les Parisiens tells qu’ils sont. I reflected on the significance of the photo book format, and it was by perusing Brassaï on Seville, HCB on Moscow, René Burri on Germany, Inge Morath on Iran, and others, that I learned what a photography narrative is all about and how a point of view gets transformed into a story.

Naturally, in this moment of sadness, my thoughts return to his collaborations, including the one that brought us together years ago around the question of the function of text in photography books. These thoughts, in turn, bring up the memories of Sarah Moon’s slip-cased five-volume photography lovers’ bible as well as her poignant Vrais Semblants; of Josef Koudelka and his journey in Gypsies and Exiles, a source of discussions, tension, and passion. I also remember his loyalty to William Klein and Robert Frank, whatever the life’s challenges and mutual differences. I remember his generosity, which always put the need for quality before management, products, and business. I also remember, indeed, I remember those big exhibitions at the Palais Tokyo which, as a Libération journalist, I awaited with baited breath, certain they would bring new discoveries and raised expectations. And then, somewhat belatedly, I discovered he was also close to illustrators, and had a deep friendship with André François and André Martin; his involvement in the advertising sagas around Citroën in the golden era of graphic design.

Bob, who spent the past two years finalizing his magnificent herbarium, leaves behind—to us and the world at large—his bestselling Photo Poche collection, the dream addition of a photographer’s ideal library. He leaves behind his magnum opus and a number of landmark titles. To bid him farewell today, I would like to evoke yet another book: a small oblong, tender and poetic volume created by André François and published in 1956 under the marvelous title, Les Larmes de Crocodile, crocodile tears.

Today an independent exhibition curator, Christian Caujolle was previously director of photography at Libération. He is also founder of the agency and gallery VU’, and teaches at the École Nationale Supérieure Louis Lumière in Paris.

Robert Delpire was born in 1926 in Paris and died on September 26, 2017. Aged 23, he created Neuf, a journal dedicated to the medical profession. He published the works of Breton, Prévert, Miller, Michaux, and Sartre. Starting in the 1950s, he was editor of some of the major figures in the world of photography: Cartier-Bresson, Brassaï, Doisneau, Robert Franck. In 1963, he opened a gallery where he exhibited, often for the first time in Europe, the biggest names in photography, illustration, and graphic design, including André François, Savignac, Le Foll, Lubalin, Milton Glaser, and Blechman…. He produced Flagrants Délits, a thirty-minute film about the work of Henri Cartier-Bresson. In July 1982, he was appointed the director of the Centre National de la Photographie by Jack Lang, the Minister of Culture. In that position, he launched the publishing series Photo Poche, the first collection of pocket-sized books devoted to photography.