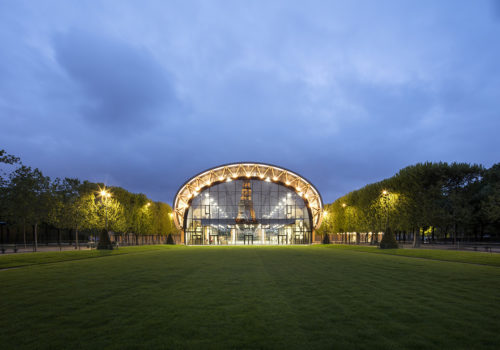 From September 2020 to May 2021, Patrick Tourneboeuf photographed the construction of the Grand Palais Éphémère in Paris.

The Grand Palais Éphémère is a temporary 10,000 sqm building designed by the architect Jean-Michel Wilmotte and constructed on the Champ-de-Mars. It is overseen by the Réunion des musées nationaux – Grand Palais and Paris 2024, and produced by GL Events. The building is a real architectural feat. Its curved, double-vault structure gives it a layout on the scale of the Champ-de-Mars, fitting into the prestigious site perfectly, the history of which is highly connected to the world’s fairs which took place on the esplanade from 1867. A post-pandemic architecture marked by its vast spaces and generous openings, the Grand Palais Ephémère has a main nave with an uninterrupted span of 51 m in breadth and 33 m in depth, completely free of any posts or structural elements interrupting the space. The 44 monumental arches of the Grand Palais Ephémère were assembled on site over three months.This wooden framework, as well as the environmentally- friendly and acoustic properties of the Grand Palais Ephémère make it a building with a remarkable structure, firmly set in our time, which is part of the new typology of interdisciplinary buildings built in recent years: The shed by Diller Scofidio + Renfro in New York, the Manchester Factory by REM, and the Museum of the 20th Century by Herzog & DeMeuron in Berlin.

During the time the Grand Palais is closed for renovation, the Grand Palais Ephémère is intended to house the major art, fashion and sporting events usually held in the Nave, such as the FIAC, Saut Hermès and Chanel fashion shows. It will also accommodate cultural and artistic events designed by the Rmn – Grand Palais. From Spring 2021 it will present to the public Tempête (Storm), a choreographical happening designed by Boris Charmatz, Palais Augmenté, a festival dedicated to new perceptions, co-produced by the Rmn – Grand Palais and Fisheye, and Société en chantier, a participative theatre project by the Rimini Protokoll company co-organised with Paris l’Eté and La Villette. In summer 2024, the Grand Palais Éphémère will host the judo and wrestling competitions of the Paris Olympics.

The Rmn – Grand Palais and Paris 2024 wanted the Grand Palais Ephémère to be an exemplary project in terms of simplicity and environmental credentials which, through the international events held there as well as through its architecture and design, should demonstrate the cultural, environmental and sporting aspirations of our time.