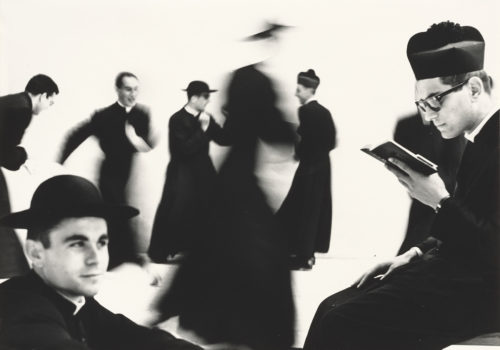 Known for his gritty, black-and-white images, Mario Giacomelli is recognized as one of the foremost Italian photographers of the 20th century. Drawn from the Getty Museum’s deep holdings, the exhibition Mario Giacomelli: Figure|Ground features 91 photographs that showcase the raw expressiveness of the artist’s style, which echoed many of the concerns of postwar Neorealist film and Existentialist literature.

The exhibition is dedicated to the memory of Daniel Greenberg (1941-2021) and was made possible through generous gifts from him and his wife, Susan Steinhauser. As photography collectors for more than two decades and founding members of the Getty Museum Photographs Council, Greenberg and Steinhauser have been generous donors to the Getty. All of the photographs in this exhibition were donated by Greenberg and Steinhauser or purchased in part with funds they provided.

A companion exhibition, The Expanded Landscape, presents photographs by 17 contemporary artists guided by aesthetic impulses similar to those of Giacomelli. Both exhibitions will be on view at the Getty Center Museum from June 29 through October 10, 2021.

“After the Museum’s yearlong closure, we are particularly pleased to be able to reopen the Center for Photographs at the Getty Center with two important exhibitions that highlight the Museum’s extensive collections,” says Timothy Potts, Maria Hummer-Tuttle and Robert Tuttle Director of the J. Paul Getty Museum. “We are especially pleased to honor the extraordinary contributions of Dan Greenberg and Susan Steinhauser, whose gifts of works by Giacomelli are the basis of the first monographic exhibition of the artist in a U.S. museum in 35 years. The exhibition and its catalogue are testament both to their passion as collectors and their generosity as benefactors to the Getty Museum over many years.”

Born into poverty, Mario Giacomelli (1925-2000) lived his entire life in Senigallia, a town on the Adriatic coast in Italy’s Marche region. He lost his father at an early age and took up poetry and painting before apprenticing as a printmaker, which became his livelihood. After purchasing his first camera in 1953, Giacomelli quickly gained recognition for his unique approach to photographing people, landscapes, and people in the landscape. Although photography was initially relegated to Sundays, when his printshop was closed, and to his immediate surroundings in the Marche, he became one of Italy’s most prominent practitioners.

Giacomelli’s use of flash, grainy film, and high-contrast paper resulted in bold, geometric compositions with deep blacks and glowing whites. He most frequently focused his camera on the people, landscapes, and seascapes of the Marche. He often spent several years exploring a photographic idea, expanding and reinterpreting it, or repurposing an image made for one series for inclusion in another.

By applying titles derived from poetry, he transformed familiar subjects into meditations on the themes of time, memory, and existence.

Among Giacomelli’s earliest photographs are portraits of family and friends. His first, sustained body of work was Hospice, which he began in 1954 and later titled Death Will Come and It Will Have Your Eyes, after a poem by the writer Cesare Pavese. Depicting residents of the home for the elderly in Senigallia and made with flash, the images are characterized by their unflinching scrutiny of individuals living out their last days. Additional early series on view include Scanno (1957-59) and Young Priests (1961-63), both of which further demonstrate Giacomelli’s ability to describe people in a specific time and place. In both series, figures clothed in black are set against stark white backgrounds. While there is an underlying sense of furtiveness or foreboding in the Scanno images, the Young Priests series, which Giacomelli later titled I Have No Hands That Caress My Face, is uncharacteristically light- hearted. Another series, The Good Earth, follows a farming family going about daily life, planting and harvesting crops and tending to livestock in the countryside surrounding Senigallia; the intermingling of generations suggests the cyclical nature of existence.

Landscapes feature prominently in Giacomelli’s engagement with photography from the beginning. The exhibition features several early works dating from the 1950s, as well as signature series, such as Metamorphosis of the Land (1958-80) and Awareness of Nature (1976-80). Both series portray fields and small farms in the Marche region, many of which he revisited as seasons changed and crops were rotated. Giacomelli wanted to show how modernized cultivation practices were overtaxing the land and changing the landscape. He often photographed from a low or an elevated vantage point—including from a plane—to eliminate the horizon and create disorienting patchworks of geometric shapes or pulsating configurations of plowed furrows.

In his later years, Giacomelli created several series that intersperse landscapes with figure studies. He often merged the two genres in double exposures or by experimenting with slow shutter speeds and moving his camera during exposure to blur the lines between figure and ground. Several of these series were inspired by poems, both as composed by himself or by others. Giacomelli reflects on the interconnectedness of space, time, and being, in these works, which have a metaphysical quality. I Would Like to Tell This Memory is one of his last bodies of work. Incorporating various props, such as a mannequin, a stuffed dog, and stuffed birds, the images in the series suggest that the artist is reflecting on the inevitability of his own mortality.

Mario Giacomelli: Figure|Ground and The Expanded Landscape are on view June 29 through October 10, 2021 at the Getty Center Museum.