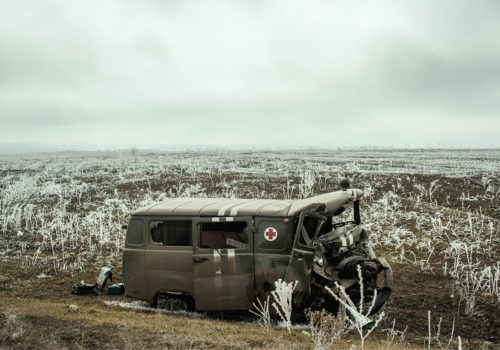 Photographs by Maxim Dondyuk in Culture of Confrontation, depict the 2013 protests in Kyiv that kicked off waves of civil unrest across Ukraine. The images are dramatic and the degree of theatricality that informs some of them is endorsed by Dondyuk’s own account of the protests as ‘a real performance’. He went on to describe them as ‘a battle of opposites: Good and evil, light and shadow…visually beautiful, like scenes from a Hollywood movie’.

Florian Bachmeier’s photographs are printed on uncoated Munken paper with a Japanese binding and are in important respects the polar opposite of Dondyuk’s. They give expression to a different consciousness of the conflict in Ukraine and cover a wider frame of reference; Euromaidan in Kyiv has a presence but only as one moment in a bloody clash of ideologies that tore the country apart and which continues to scar the body politic.

A documentary photographer for many years, with a particular focus on Eastern Europe, Bachmeier (born in 1974) took his pictures in Ukraine over the last eight years, and across the 180 pages of his first photo book, In Limbo, 111 of them are presented in a bold and imaginative design. The publisher Thomas Gust explains: ‘We wanted to convey the feeling that everything takes place in the same moment. Sometimes this is how triptychs arise, sometimes the images collide directly …. We wanted to condense everything in the book as much as possible.’ The triptych analogy is an exact one, with many of the book’s spreads made up of three panels: a central one that acts as the focus of attention; a left panel showing a part of the picture that appears in full on the previous page; and a right panel showing part of the picture that will be seen in full on the next page. For this to work as the book’s signature style, pages of single or double images need to be interspersed before and after the triptych, a logistically tricky task which fully justifies itself because of the way the overlapping images bring together different elements of the same subject matter.

The subject matter, a heartless and parasitic proxy war feeding off a divided country and remorselessly damaging people’s lives cannot be rendered as a Hollywood action movie. There is a film quality to In Limbo’s design but it arises from the interrelationship of images that emerges from their sequencing. This constitutes less a visual journey – the pages of this book resist being quickly turned – and more a series of static moments in an ongoing narrative that folds back on itself. The camera catches moments of stillness: a woman, walking for kilometres for drinking water, holds a plastic bottle in one hand, a bucket in the other, and in the background stands a monument commemorating a local victory by the Red Army during World War II; the patient uncertainty of another woman is written on her face as she draws back a curtain; the pensive faces of a young couple, the woman laying in the lap of her partner who stares at a narrow window in their room, understate their plight in living on a front line, bringing bullets repeatedly flying over their house.

In Limbo includes (in German, English and Ukranian) a reflective essay by Kateryna Mishchenko and an index of photographs that includes historical information and careful descriptions, personalising the people wherever possible. The couple living on a front line are Lisa and Alexander whose mother was killed by a grenade while trying to get a job in an area now controlled by separatists; the woman drawing back a curtain is Tatiana and she is living with her sister and child while her fiancé and brother-in-law look for work 600 kilometres in Kyiv. No name can be given to a young man, apparently unknown in the neighbourhood, killed by a grenade and whose frozen body lies on waste ground. He was later covered with a carpet, his boots removed.

The marshy wetlands of the Pinsk marches appear forlorn-looking, as if empathising with the bleak condition of citizens who struggle with the physical and psychological damage inflicted on them. They are in limbo in the sense of being held in a state of uncertainty, facing a binary choice of whether to accept and bear their state or leave the country that is their homeland.

The word limbo comes from the Latin limbus, meaning an edge, a border or boundary. In Catholic theology it signifies a region supposed to exist on the border of Hell as the abode of the just who died before Christ’s coming (and of unbaptized infants). It’s a medieval notion that holds no credence other than figuratively and, as such, it represents the location for the pain and suffering endured by the citizens of Ukraine.

Buchkunst Berlin, are emerging as one of the most creative and talented publishing houses in Europe. They have produced some hugely interesting collections of photographs, like Berlin May 1945, and In Limbo, probably their most technically complex publication, follows in this tradition with Florian Bachmeier’s remarkable photographs.