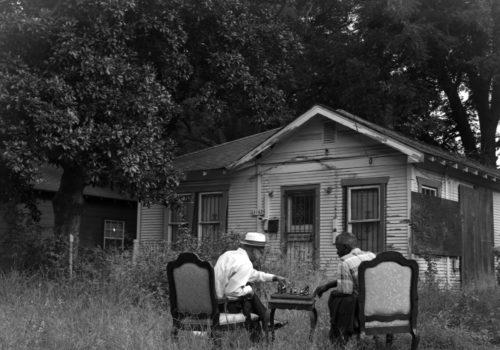 For L’Œil de la Photographie, photographic books are as important as an exhibition or a portfolio. They make the history and the actuality of the medium. Our correspondent Zoé Isle de Beauchaine takes a tirelessly curious and informed look at the latest releases.

For his first book, American photographer and Magnum Agency member Colby Deal celebrates the beauty of his childhood neighborhood.

Third Ward is a historic district of the city of Houston, one of the Texas cradles of the American civil rights movement in the 1960s. It is home to the city’s most diverse African-American population and an immense cultural wealth, yet it is threatened with extinction by gentifrication and the departures it causes.

In the face of this gradual cultural erasure, Colby Deal set out to create a visual archive of the community that saw him grow up. Since 2013, he has photographed moments in the life of Third Ward and its residents. This project, which is still ongoing, already represents over a thousand negatives. With Beautiful, Still the photographer reveals a captivating sample of them.

Under the elegant burgundy cover, enhanced with gold, a hundred black and white photographs are displayed. Colby Deal immortalizes with grace the daily life of a community where generations merge in an atmosphere of fraternal harmony. The inhabitants go about their business, at home or in the streets of Third Ward, alone or during the various meetings of the neighborhood – mass, a barbecue, a wedding, a yard sale – or simply a shared moment in a garden or on the steps of a building. A peaceful life episodically disturbed by the images of a fire or an arrest, and, here and there, several abandoned houses.

Colby Deal plays with the different facets of the documentary genre, alternating snapshots and posed portraits. His photographs, sometimes blurred, sometimes sharp, express the strength and overflowing life of family, community and individual life in Third Ward. The photographer has chosen to preserve the traces of dust and a few scratches on his negatives. They evoke the marks of a life lived to the fullest while suggesting “the fragility of these images and the precariousness of the social fabric they depict. At any moment, the ground can collapse.

In this very personal documentary series, where individual and collective memory mingle, Colby Deal pays a tender tribute to the community of his childhood as well as to the African-American community, whose members have often been portrayed in a negative light. For the photographer, Beautiful, Still is ultimately a celebration of “similar communities across the nation and around the world.”